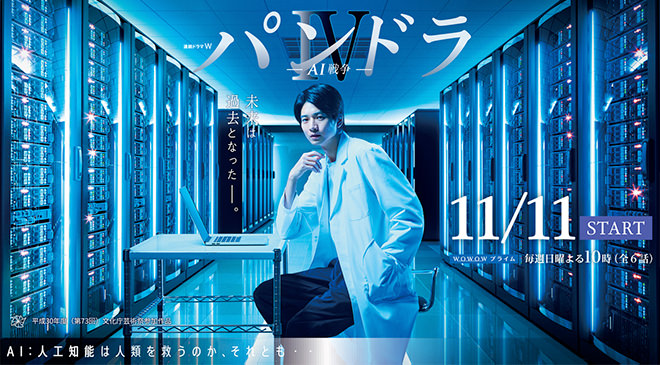 Story
Doctor Suzuki Tetsuro uses AI technology that he had developed to diagnose patients at Mediknox Medical Centre, which is run by an IT company. AI diagnosis proves popular with the public because it takes less time, is precise and also free of charge. Gamo Shunpei, the CEO of the IT company that introduced AI diagnosis, advocates promoting AI for medical treatment to ensure they do not fall behind other countries. However, Arizono Naoko, the head of the medical association, expresses reservations that it is “early days”. A top surgeon Ueno Chizuo is also uncomfortable about performing surgery on patients diagnosed by AI. Meanwhile, one such patient whom Ueno operated on, dies after his condition takes a sudden turn for the worse after surgery. Ueno claims this is because of the unnecessary AI diagnosis. Suzuki refutes that it was due to Ueno’s misjudgment. A Maichou Shimbun journalist Tachikawa Haruo gets wind of the patient’s death and begins his own investigation.

Characters
Mukai Osamu as Suzuki Tetsuro
A young physician and AI developer. Wanting to make diagnostic mistakes a thing of the past, he studied and finally hit on using AI which can make accurate diagnosis. He developed Michael, a diagnostic imaging AI. He usually does not express his feelings openly and appears unfriendly, but he treats patients kindly. His father passed away and his mother Haruko moved into a nursing home because she is suffering from dementia. He made the acquaintance of Gamo Shunpei through an incident that took place three years ago.

Kuroki Hitomi as Arizono Naoko
The chairwoman of the medical association. She has a confrontation with Gamo Shunpei who has entered the medical industry, in order to protect her own authority. She is opposed to the introduction of AI in medical care. She is the influential director of Seishoukai Hospital which has served as the primary physician in political and financial circles since her grandfather’s time

Mimura Rie as Hashizume Nami
A nurse who is put in charge of the AI diagnosis room and gets to know Suzuki Tetsuro. She is gradually attracted to Suzuki who treats patients kindly.

Okamoto Rei as Kinoshita Wakako
The wife of a man who received an AI diagnosis and died. She tries to sue the hospital.

Miura Takahiro as Azuma Koichiro
A lawyer who finds no motivation in work such as corporate law which has been assigned to him. While searching for work that that he can feel passionate about, he receives a request from Kinoshita Wakako whose husband died in what she claims to be medical malpractice due to AI.

Yamamoto Koji as Tachikawa Haruo
A journalist with Maichou Shimbun. He has won awards in the past but seems to have stagnated lately. An article that he had written leads him to uncover information about the death of a patient who was diagnosed by AI and he investigates the pros and cons of AI.

Harada Taizo as Ueno Chizuo
A skilled heart surgeon. However, he does not care about his appearance and is taciturn. He fears that he will lose his position with the introduction of AI diagnosis.

This blog contains information and musings on current and upcoming Japanese dramas but is not intended to be comprehensive.
View all posts by jadefrost →
This entry was posted in Fall 2018 Dramas, WOWOW and tagged Harada Taizo, Inoue Yumiko, Kuroki Hitomi, Mukai Osamu, Pandora Series, Watabe Atsuro, Yamamoto Koji. Bookmark the permalink.