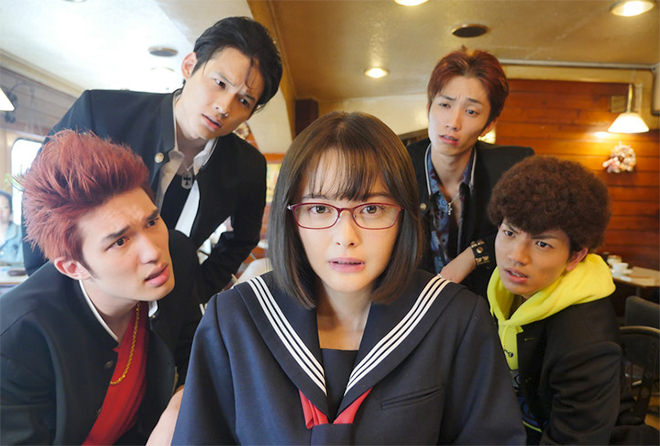 Yuurei Shain
Story: Kudo Ryoji (Sano Shiro) works in solitude at a construction company’s editorial office for corporate history. He does not have a presence and quickly goes back on time. In other words, he is like a phantom employee. Kudo has lost his passion for his work. With four years left to retirement, he thinks of passing the time peacefully without doing more than is necessary. One day, Kudo is in the company’s toilet and encounters a young employee Satoyama Shuhei (Katsuji Ryo) who was supposed to have died from overwork. Satoyama has become a ghost and appeared before Kudo who is the only one who can see and talk to him for some reason?! Satoyama desperately wants to complete his last piece of work and entreats Kudo to help him. Kudo reluctantly accepts the work that Satoyama had left unfinished.
Cast: Sano Shiro, Katsuji Ryo

Ashita no Atashi
Story: Saiki Kaori (Kuninaka Ryoko) is a housewife who leads an insipid and boring life. She has also become weary of married life with her husband Takuya (Oshinari Shugo). One day, a banner-like ad pops up on Kaori’s smartphone screen with the words “The Future You”. When she clicks to access it out of curiosity, her image suddenly appears on screen and a video that is like a movie trailer starts to play. In the middle of it, Kaori has a reunion with her ex-boyfriend Onodera Shuji. She cannot hide her surprise at how it developed like a love story and tries to play the video again. However, there is a message that says the video cannot be replayed because it has already been watched. The next morning, Kaori begins a routine no different from any other day. She completely forgets about the video, but Shuji truly shows up in front of her … …
Cast: Kuninaka Ryoko, Oshinari Shugo, Morita Suzuka, Shibuya Kento

Christmas no Kaibutsu
Story: As Christmas Eve approaches, Onodera Nao has a wonderful hotel dinner date with her boyfriend Ogata Ryosuke (Hongo Kanata), who is the CEO of an IT company, and she hopes that he will propose to her on that day. Nao is anxious about a weirdly dressed “monster” that always shows up in front of her on Christmas Eve. This large, bent and ugly “monster” wears a shabby-looking coat and its expressions cannot be seen because of its disheveled hair. This started after an incident that occurred seven years ago. The “monster” appears in front of Nao who has just finished dinner on what is supposed to be an unforgettable and lovely day … …
Cast: Kawaei Rina, Hongo Kanata

Dasshutsu Fuka
Story: One day, Shikura Shinji (Sakaguchi Kentaro) wakes up in a cramped concrete room. The door is locked with a passcode and no one responds even when he knocks. Both his mobile phone and watch are missing. Shinji is feeling at a loss when four monitors come on all of a sudden. He sees himself on one of the screens, and three other men and women who have been confined like him, on the other screens. The number of viewers is indicated on the bottom right of the screen. The signal for the start of the escape game appears, and a stream of comments from viewers are displayed – “What’s this?” “Practical joke?” It seems that the four monitors are being watched by a large number of unspecified individuals through the internet. It occurs to Shinji that the opening can be found by gaining viewers and gathering hints from them. He tries to escape with their help but … … Why has Shinji been locked in this secret room and who is mastermind of this escape game?
Cast: Sakaguchi Kentaro

Masumatikkuna Yugure
Story: Rinko (Tamashiro Tina) is suddenly gets entangled with a group of delinquents Fumiya (Jesse), Kazunari (Tanaka Juri), Daichi (Matsumura Hokuto) and Munenori (Kochi Yugo) who want her to teach them how to draw concentric circles because she is good at studies. There is one reason for this – to bring their buddy Takashi (Yabe Kyosuke) who died in an accident, back to life … … Takashi was like a leader to them and the group has been grief-stricken over his sudden loss. One day, they happened to pick up an old book on black magic from the roadside. However, the way to resurrect a dead person is described in mathematical terms that they cannot understand at all. Rinko volunteers to help the discouraged group. From that day on, they start having study session with her every day after class.
Cast: Tamashiro Tina, Jesse, Tanaka Juri, Matsumura Hokuto, Kochi Yugo, Yabe Kyosuke, Yamamura Momiji

This blog contains information and musings on current and upcoming Japanese dramas but is not intended to be comprehensive.
View all posts by jadefrost →
This entry was posted in Fall 2018 Drama Specials, Fuji TV and tagged Hongo Kanata, Kuninaka Ryoko, Sakaguchi Kentaro, Sano Shiro, Yo ni mo Kimyouna Monogatari Series. Bookmark the permalink.