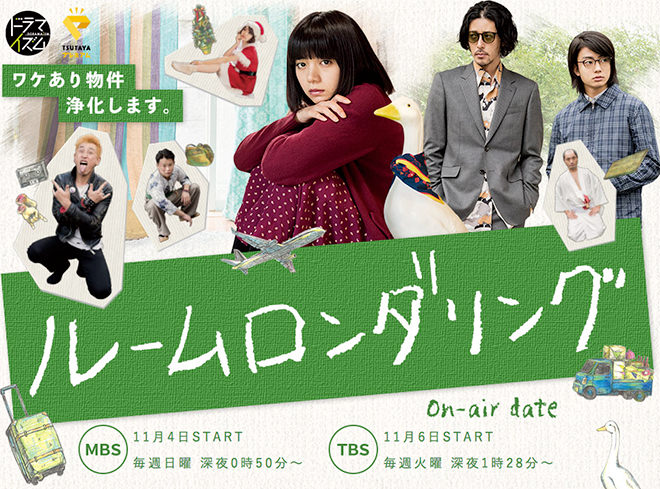 Story
Yakumo Miko keeps moving from one apartment with an interesting history to another. Her job is “room laundering”; living in stigmatised properties that her mother’s younger brother Ikazuchi Goro finds, erasing the incident’s history and cleaning the place up before the next occupant comes. However, what is in store for Miko wherever she goes are ghosts who linger in the apartments – former occupants with a lot of regrets. For some reason, Miko is able to see them and she is forced to solve their problems. This is complicated by Nijikawa Akito who used to be a neighbour at one of the places she lived in, and their relationship eventually develops into a romance … …!? One day, Miko moves to an apartment building called Toaru for a room laundering job. There is a ghost in the storage space under the floor. Yamao Junya, a small-time gangster, was beaten to death after he was caught for stealing his gang’s money. He has not been able to rest in peace because of his ex-girlfriend who works at a pub. At his request, Miko goes to see how she is doing. Meanwhile, Goro also hears about the case at the apartment building from Saizen and detective Zenigame, and begins his search.

Characters
Ikeda Eliza as Yakumo Miko
Her father died when she was 5 years old and her mother disappeared. Although she was brought up by her grandmother, she is all alone at the age of 18. She is reserved and not good at socialising with people. Her “room laundering” job should be a good arrangement for her. But what awaits her everywhere she goes are ghosts who linger in the apartments – former occupants with a lot of regrets. They discuss their troubles with her and she unwittingly gets pushed around.

Shibukawa Kiyohiko as Kasuga Kimihiko
The ghost of punk rocker who cannot give up his dream of becoming a musician and rest in peace even though he is dead. He used to stay in the place where Yakumo Miko lived but has possessed a cassette that he is attached to. This cassette is now at Ikazuchi Real Estate. He dreams of being taken to his hometown of Aomori.

Ito Kentaro as Nijikawa Akito
A former neighbour. He awkwardly came to the rescue of Yakumo Miko in the past even though she restricted her interactions with neighbours, and is now Miko’s confidant. Although he cares about her, he is unable to convey it frankly because he is awkward. He works part time at a convenience store and aspires to be a writer.

Yamoto Yuma as Yamao Junya
A ghost who is a former resident of the apartment building Toaru. He was beaten to death and abandoned in storage space under the floor after it was discovered that he stole a gang’s money for his beloved girlfriend. He is worried about his girlfriend and cannot rest in peace.

Odagiri Joe as Ikazuchi Goro
Yakumo Miko’s uncle who runs Ikazuchi Real Estate. He worries about his niece who lost her parents when she was young and introduces her to a part-time job in room laundering. Like Miko, he can see ghosts. He is concerned that Miko gets involved with ghosts more than is necessary.

This blog contains information and musings on current and upcoming Japanese dramas but is not intended to be comprehensive.
View all posts by jadefrost →
This entry was posted in Fall 2018 Dramas, TBS/MBS and tagged Odagiri Joe, Room Laundering. Bookmark the permalink.