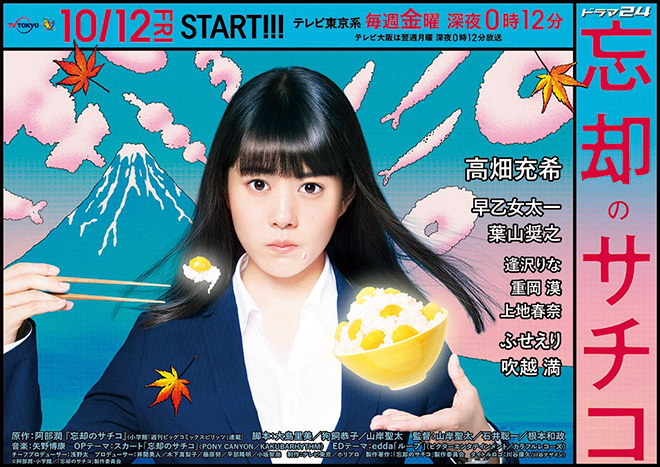 Story
Sasaki Sachiko is an editor of literary magazines at Chugakukan. She is in charge of Sarara, a monthly magazine. Called “Iron Lady”, she has earned the respect of her colleagues for her perfectionism, composure and diligence. However, on the day of her wedding, her groom Shungo ran away without any warning. After experiencing this tragedy, Sachiko discovered that delicious food could help her forget her hurt. Several months later, Sachiko seems to have completely returned to her former “Iron Lady” self. However, she is reminded of Shungo again and again by the appearance of two writers – the popular author Himemura Hikaru who has a tendency to wander off and the light novel writer Genius Kuroda who is a social recluse because he loathes people – as well as a new editorial staff Kobayashi Shinichi who cannot read situations. When that happens, Sachiko turns to food. Then Shungo shows up … …

Characters
Takahata Mitsuki as Sasaki Sachiko
The editor in charge of the monthly publication Sarara at Chugakukan’ literary editorial department. She is called “Iron Lady” because of her perfect work. She is very earnest and excellent. She was supposed to get married to her boyfriend Shungo and have both a perfect personal life and work life. But on the day of the wedding, Shungo runs away all of a sudden. She finds a way to forget him by eating delicious things.

Saotome Taichi as Shungo
Sasaki Sachiko’s boyfriend. He is the perfect boyfriend – good at cooking, kind and caring. However, on the day of their wedding ceremony, he only leaves a farewell letter with the words, “I’m sorry, Sachiko” and disappears all of a sudden.

Hayama Shono as Kobayashi Shinichi
A new editorial staff who has been assigned to the monthly publication Sarara. He fearlessly speaks his mind about everything and cannot read situations. Because of that, he gets the nickname “well-meaning monster” by colleagues in the department. He is worried about Sasaki Sachiko who is his trainer?

Fuse Eri as Sasaki Kazuyo
Sasaki Sachiko’s mother. She worries about her daughter even as she supports her.

Fukikoshi Mitsuru as Shirai Tomoaki
The chief editor of the monthly magazine Sarara. He has great faith in Sasaki Sachiko’s work but is a little worried about her. There are times when he indulges his cute subordinate.

This blog contains information and musings on current and upcoming Japanese dramas but is not intended to be comprehensive.
View all posts by jadefrost →
This entry was posted in Fall 2018 Dramas, TV Tokyo and tagged Boukyaku no Sachiko Series, Fukikoshi Mitsuru, Saotome Taichi, Takahata Mitsuki. Bookmark the permalink.