Boku to Shippo to Kagurazaka 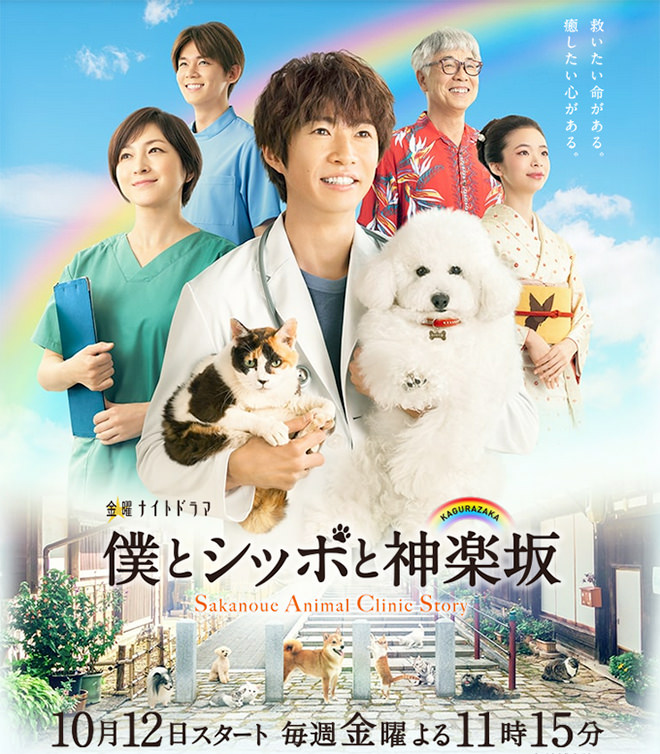 Story
Koenji Tatsuya, a young vet, quits the veterinary hospital he works at and returns to his hometown of Kagurazaka in Tokyo. Wanting to work under Dr Tokumaru Zenjiro, the vet he respects, he knocks on the door of his clinic. However, Dr Tokumaru is not there. He has only left behind a letter and a dog Daikichi in his care. The letter says, “I’ve given up the clinic and leave the rest to you.” Tatsuya is bewildered that Dr Tokumaru has entrusted the clinic to him and retired. He sees a constant flow of patients as he kicks off a chaotic first day running the clinic on his own. Then one day, Tatsuya encounters a papillion that was run over by a car on the street and the young boy Kase Daichi with it. Tatsuya takes the bloodied papillion to the vet clinic with Daichi and decides that immediate surgery is needed. He is about to begin making preparations. But Daichi’s mother Kato Tokiwa who is worried because Daichi is suddenly uncontactable, arrives at the clinic. She insists that Tatsuya take the dog to another hospital because it is impossible to do such an operation in this old clinic which lacks equipment and staff. Tatsuya responds that there is no time to transport the dog because of a suspected spleen rupture. Sensing that the papillion’s life is in danger, an anxious Daichi is close to tears as he appeals to Tatsuya to save the dog. Tatsuya says he will do his best and gently takes the boy’s hand and quietly closes his eyes. Ignoring Tokiwa’s protests, Tatsuya begins the surgery. Tokiwa ends up supporting him. However, she looks surprised at the way he carefully handles the scalpel. Tatsuya realises that she is a veterinary nurse and invites her to work for his clinic but she already has a prospective employer … … As Tatsuya’s interactions with the people of Kagurazaka deepen and he is eventually called Dr Ko. With his ability to connect with the animals which cannot speak and willingness to fight to save their lives, Tatsuya becomes a vet like no other for this town.

Characters
Aiba Masaki as Koenji Tatsuya
He was born and grew up in Kagurazaka. After he graduated from vet school, he worked in public practice at a vet hospital. However, he returns to Kagurazaka and opens Sakanoue Veterinary Clinic. He appears to be weak but he is skillful and kindhearted. He affectionately calls the dogs and cats that come to the clinic “Shippo”. With his experience from his days in public practice and ability to connect with these “Shippo” which cannot speak, he becomes a vet like no other for this town.

Hirosue Ryoko as Kase Tokiwa
A veterinary nurse who joins Koenji Tatsuya’s Sakanoue Veterinary Clinic. A kindhearted and tough woman. She is raising her son Daichi on her own. She claims that stewed food are her signature dishes and makes her son Daichi (and eventually Tatsuya too) eat the food which has been simmered and simmered for days on end.

Yamura Hiroki as Kase Daichi
Kase Tokiwa’s son. He comes to Sakanoue Veterinary Clinic at Koenji Tatsuya’s request to look after the animals.

Shuri as Suzume
A geisha of Kagurazaka. She goes in and out of Koenji Tatsuya’s house because she is taking lessons in the shamisen from his mother Takako. She has fancied Tatsuya since she was a child. She makes bentos which she delivers to him and expresses her honest feelings. She sees the nurse Kase Tokiwa as her love rival.

Kato Kazuko as Koenji Takako
Koenji Tatsuya’s mother. She used to be a popular geisha and is now a shamisen teacher. She brough Tatsuya up on her own. She worries about when her son will get married and have his own children as she watches over him.

Issey Ogata as Dr Tokumaru Zenjiro
He runs a veterinary clinic in Kagurazaka but suddenly entrusts the clinic to Koenji Tatsuya and disappears. He is a doctor well-liked by the people of Kagurazaka.

Murakami Jun as Tashiro Shinichi
A vet who works for Narutown Animal Hospital. He has exceptional skills but he is eccentric. He likes Kase Tokiwa and considers Koenji Tatsuya his love rival.

Original Work
Boku to Shippo to Kagurazaka by Tarasawa Michi

This blog contains information and musings on current and upcoming Japanese dramas but is not intended to be comprehensive.
View all posts by jadefrost →
This entry was posted in Fall 2018 Dramas, TV Asahi and tagged Aiba Masaki, Boku to Shippo to Kagurazaka, Hirosue Ryoko, Issey Ogata. Bookmark the permalink.