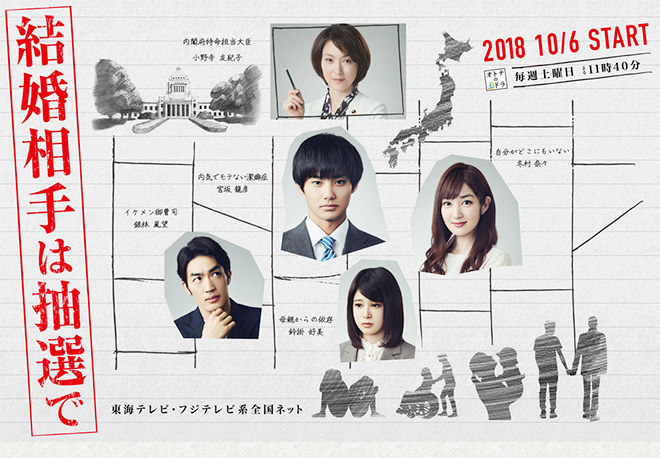 Story
26-year-old bachelor Miyasaka Tatsuhiko works as a system engineer at a computer software company. On this day, he brings his chopsticks for a meal at his regular restaurant which serves set meals, and happens to meet the gaze of a female colleague who assiduously avoids him. Dressed in a new suit, Tatsuhiko later arrives at the main conference room of the ward office. Men and women in their 20s and 30s are milling around. He looks around nervously as a plainly dressed Suzukake Yoshimi and a very handsome Ginbayashi Ranbo enter the room. The last person to arrive is the beautiful and flamboyantly attired Fuyumura Nana. When Nana passes Tatsuhiko who has come back from the toilet, she impatiently asks him for the location of the main conference room and leaves without a word of thanks. Tatsuhiko has doubts about such a beautiful woman attending this event. This is the venue for the government-sponsored matchmaking by ballot. Almost three months ago, Onodera Yukiko, lawmaker of the House of Representatives, was named the Minister of State for the new Marriage Lottery Act. Under this law, people aged 25 to 39 who are single and have no children have to get married to the prospective partners randomly chosen by ballot. If the person is not to their liking, they can turn down up to two people. However, if they turn down a third person, they will have to serve on an anti-terrorism logistics unit for two years. This is something unprecedented and throws the country into chaos. However, the law has been passed by both the Upper House and Lower House and gone into effect. Although it is hard to counter the declining birth rate and ageing population which shows no sign of bottoming out, Yukiko sees it as an opportunity to further her political ambitions and steps up to the challenge. The lives of Tatsuhiko, Nana, Ranbo and Yoshimi are about to be caught up in a big swell. A geek who is extremely particular about cleanliness, Tatsuhiko cannot hold a conversation with females and is totally unpopular. He is very anxious, and at the same time, has great hopes for this law. Nana lives with her family in Tokyo and joined a radio station through connections. She was dumped by her boyfriend Ranbo just before the law went into force and later failed miserably at the blind dates. Tatsuhiko and Nana who should not have met, eventually end up on a blind date … …

Characters
Nomura Shuhei as Miyasaka Tatsuhiko
A system engineer who works for a computer software company. He is a geek and totally unpopular with women. He lives alone in Tokyo. He does not trust people and is extremely particular about cleanliness due to trauma from his junior high school days. He hides his sense of righteousness and is withdrawn. He is terrible at communicating with women and regards the new law to choose a prospective partner by ballot with a mix of unease and anticipation. Although he has hopes of romance and marriage, he has no confidence that this will come true.

Takanashi Rin as Fuyumura Nana
A beautiful employee of a radio station. It sounds good but her real work is just chores such as sorting postcards. She joined the station through connections and is a burden. She lives with her family in Tokyo and has never known any hardship. She majored in the violin at a music college but was ordered by her paternal grandmother to give it up. Her mother passed away when she was a young child and she was raised by her strict grandmother and has lived under her thumb. Her current boyfriend Ginbayashi Ranbo has the looks, academic background and career. She thinks that he is finally someone she can introduce to her grandmother, and hopes that he will propose to her soon.

Ginbayashi Ranbo as Otani Ryohei
A handsome employee of an advertising agency. His father is a university professor who researches French literature and his mother is a famous kimono stylist. He has an impeccable profile. He is good at socialising but has a slightly goofy side. Although he is well-meaning in his words and deeds, it feels that he lacks some common sense. He has been dating Fuyumura Nana for one year but has no interest in getting married.

Satsukawa Aimi as Suzukake Yoshimi
A nurse who lives in Hyogo Prefecture with her mother. Her father had an alcohol addiction which distressed her mother and he finally passed away five years ago. She became her mother’s reason for living from then on and is completely dependent on her mother. She leads a simple life and is not popular with men.

Wakamura Mayumi as Onodera Yukiko
The Minister of State who is in charge of the new Marriage Lottery Act. She use to be a synchronised swimmer and participated in the Olympics. She is motivated to make this Act a success in order to rise in the political world. She got married and had a child before becoming a politician. However, she got a divorce because of her husband’s affair. When she was mobbed by the media, her resolute attitude when she said the words, “I’ll raise my daughter as a single mother,” made a good impression and the news headlines. As a result, she received an offer from political circles and became a lawmaker of the House of Representatives.

This blog contains information and musings on current and upcoming Japanese dramas but is not intended to be comprehensive.
View all posts by jadefrost →
This entry was posted in Fall 2018 Dramas, Fuji TV and tagged Kekkon Aite wa Chusen de. Bookmark the permalink.