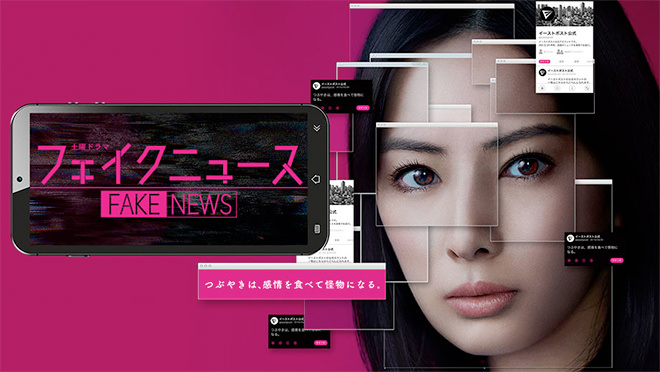 Date: From 9.00 p.m., 20 & 27 October 2018
Scriptwriter: Nogi Akiko (Kemono ni Narenai Watashitachi, Unnatural, Nigeru wa Haji da ga Yaku ni Tatsu)
Cast: Kitagawa Keiko, Mitsuishi Ken, Nagayama Kento, Sugimoto Tetta, Arai Hirofumi, Iwamatsu Ryo, Yamoto Yuma, Yoshida Oolongta, Kobayashi Kinako, Ikezu Shoko, Kaneko Daichi, Sakaguchi Ryotaro, Kakei Miwako, Yasui Junpei, Nagaoka Tasuku, Okayama Hajime
Synopsis: Journalist Shinonome Itsuki (Kitagawa Keiko) has been seconded from a big newspaper Higashi Nippon Shimbun to internet media company East Post. One day, she is ordered by chief editor Usami Kanji (Arai Hirofumi) to do a story on caterpillars in instant food. A middle-aged man (Mitsuishi Ken) who posted about the caterpillars on social media shows up in front of Itsuki. This rumour blows up in an unexpected direction. It develops into a struggle among companies and even extends to Itsuki herself. In a world where it is difficult to tell between the truth and the lies, she fights a lone battle in her search for the source of the fake news which continues to spread. What is the objective of the person who created this fake news? Will Itsuki be able to get to the truth and tell it?
Official Website: www.nhk.or.jp/dodra/fakenews

This blog contains information and musings on current and upcoming Japanese dramas but is not intended to be comprehensive.
View all posts by jadefrost →
This entry was posted in NHK, Fall 2018 Drama Specials and tagged Kitagawa Keiko, Arai Hirofumi, Mitsuishi Ken, Nagayama Kento, Sugimoto Tetta, Fake News. Bookmark the permalink.