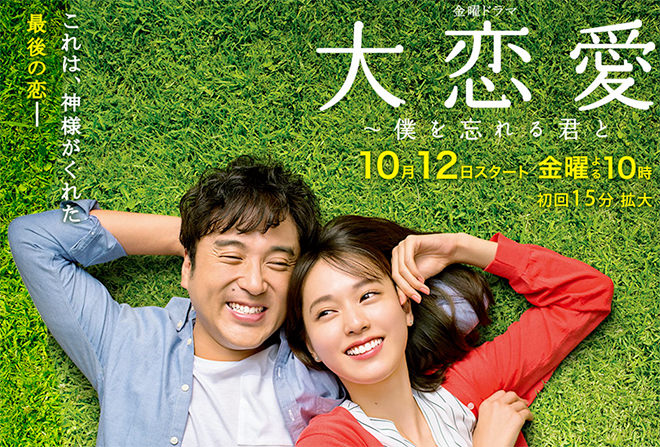 Story
34-year-old Kitazawa Nao is a doctor at a ladies clinic where her mother Kaoru serves as the director. She works hard every day and has a fulfilling life. Although she did not have an earth-shattering romance, she met an older doctor Ihara Yuichi with perfect qualities through a formal introduction and they are engaged to marry. One month before her wedding, Nao moves to Yuichi’s apartment. On the day of the move, she encounters a surly Mamiya Shinji, who works part time for the moving company and used to be a struggling writer. A doctor with a fiance and a part-time mover seem mismatched. But Shinji is the person that Nao had been seeking. He makes her feel comfortable and laugh heartily. Nao plunges forward into the first true love she has ever known despite her mother’s opposition. Shinji is overwhelmed by Nao’s intensity, but gradually gets attracted to her. However, an abnormal change in Nao hampers their romance. Nao discovers that she is suffering from Alzheimer’s disease. In spite of this, Shinji changes this crisis with laughter and cheerfully supports Nao. Through her illness, Shinji learns the meaning and joy of mutual love and her presence awakens his potential. He writes a book about living with Nao and their romance, all the while aware that Nao will no longer know him some day … …

Characters
Toda Erika as Kitazawa Nao
A doctor who works at Kita Ladies Clinic where her mother serves as the director. Back in her student days, she went from a high school for girls to a medical college for women. There were men who made passes at her while she was focused on her studies. She has experience dating but has never been immersed in love. Thinking it is about time she gets married when she turns 34, she discusses it with her mother, professor and meddlesome clinic patients. She is introduced to Ihara Yuichi, a man with perfect qualities who is expected to be a university associate professor. While she does not have any romantic feelings, she feels the charm of the handsome and intellectual Yuichi, and thinks they will make good life partners and gets engaged.

Muro Tsuyoshi as Mamiya Shinji
He was abandoned by his parents immediately after birth and does not know their names. Because the surname of the chief priest of the shrine that he was abandoned at was Mamiya, he was given that surname after the orphanage created a family register. He was cherished at the orphanage but has difficulty loving people as he was not loved by his parents. He is unexpectedly very popular and has experience dating. However, he has never had a genuine romantic relationship because he is fundamentally unable to trust people. After he graduated from a part-time high school, he worked in various jobs. He felt a deep loneliness and unique sensitivity due to his background, and began writing novels to save himself from his own misery. When he was 21, he won a newcomer award for Suna ni Mamireta Anjelica. He was hailed by the media as a new star of the literary world. His novel became a bestseller and he attracted a lot of attention. However, when the details of his much awaited second novel was announced, it was panned. It was nowhere as popular and he was forgotten by the public. Then one day, he meets Kitazawa Nao at an apartment building for his part-time job for a moving company. She says that she lovss his novels so much that she can recite parts of them and he starts to fall deeply in love with her. Her existence begins to reawaken his latent talent.

Kusakari Tamiyo as Kitazawa Kaoru
Kitazawa Nao’s mother and a gynaecologist. Kita Ladies Clinic’s director and a capable business woman. Her husband died young and she raised Nao on her own. Kita Ladies Clinic was an ordinary antenatal clinic but achieved great success after its transformation to specialise in hormone replacement therapy for menopause. She learns that Nao has fallen in love with Mamiya Shinji and is dead set against their relationship because of the huge differences in their upbringing, academic background and education. Then she learns that Nao is suffering from the early onset of Alzheimer’s disease and tries her best to support her daughter.

Matsuoka Masahiro as Ihara Yuichi
Born to a famous architect and well-known wedding dress designer, he is an elite psychiatrist. He worked at a university’s medical office after graduating from its school of medicine. Five years ago, he was sent to a Washington medical college as a researcher and worked on cutting-edge research for Alzheimer’s disease. In the midst of this, he was summoned by his professor from his alma mater to become an associate professor. When he returned to Japan for a brief visit, he was introduced to the gynaecologist Kitazawa Nao as a prospective marriage partner. Nao is beautiful, and also an interesting woman who speaks her mind. Her values are also similar to his and she is independent. He believes it will be easy to live with her. Although he never thought of getting married by the age of 40, he is going to become an associate professor and his parents like Nao very much. He decides to settle down. Then one day a month before their wedding ceremony, Nao tells him all of a sudden that she wishes to break off their engagement. However, when he learns that she is suffering from the early onset of Alzheimer’s disease, he tries to support her as her attending physician. In the process, he becomes aware of his true feelings for her. Furthermore, these emotions also disturb Mamiya Shinji.

This blog contains information and musings on current and upcoming Japanese dramas but is not intended to be comprehensive.
View all posts by jadefrost →
This entry was posted in Fall 2018 Dramas, TBS/MBS and tagged Dairenai, Kusakari Tamiyo, Muro Tsuyoshi, Oishi Shizuka, Toda Erika. Bookmark the permalink.