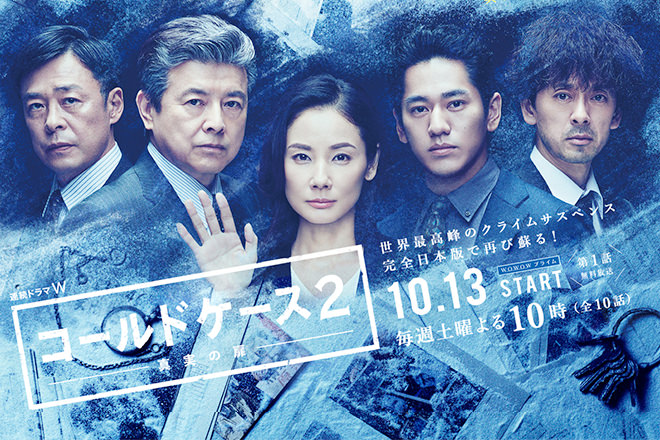 Story
A skeleton has been dug up from the grounds of a university. Detectives Ishikawa Yuri and Takagi Shinjiro from the Kanagawa Prefectural Police’s First Investigative Division, join their colleagues Kaneko Toru and Tachikawa Daisuke who reached the scene first. They learn from the student identification card that was buried with the dead body that the victim is Hashimoto Seiji. He is the Hashimoto Seiji who participated in the Yokosuka uprising in 1971 where students clashed with riot police, and went missing after that. The next day, a woman named Emi who claims to be Hashimoto’s daughter visits Yuri at the First Investigative Division. Saying that Hashimoto and her mother were radical activists during their student days, Emi confides that she and her mother receive money from a person who appears to be Hashimoto every year. Believing that he is still hiding out somewhere, the team including Motoki Hidetoshi focus on the foreign postmark on the envelope used to send the money. There is a possibility that the statute of limitation for disappearance cases will not apply because he has been abroad for over 30 years, and they launch an investigation.

Characters
Yoshida Yo as Ishikawa Yuri
An inspector of Kanagawa Prefectural Police’s First Investigative Division. She has a strong sense of justice, an instinctive perceptiveness and an observant eye. She remains greatly traumatised by the fact that she killed the vicious criminal, Akamatsu Eiji, with her own gun two years ago, and has been undergoing counseling under the instructions of her boss Motoki Hidetoshi. She is always strong. But when she raises her gun, she unexpectedly recalls Akamatsu’s face and her hand also shakes.

Nagayama Kento as Takagi Shinjiro
A sergeant of Kanagawa Prefectural Police’s First Investigative Division. He has been Ishikawa Yuri’s partner for two years, and has grown as a detective with the support of the team. At times, he is impertinent to his senior detectives. On the other hand, he also displays a reliable side as he soothes Tachikawa Daisuke who can get worked up. Since the suicide of his girlfriend two years ago, he stands by the families of victims and faces them with sincerity. He grieves her loss and is trying to overcome his sorrow.

Takito Kenichi as Tachikawa Daisuke
Ishikawa Yuri’s colleague and an assistant inspector of Kanagawa Prefectural Police’s First Investigative Division. He displays cynicism sometimes. He is in a rush to solve cases. At times, he gets worked up and out of control. Because he is kind and shy with everyone, he is a pain in the neck to the team. On such occasions, he will be told by Yuri that she hates people who behave dramatically and he is consumed with worry that this is in reference to him. He is currently living apart from his wife but when he sees an attractive woman his expression will soften.

Mitsuishi Ken as Kaneko Toru
An assistant inspector of Kanagawa Prefectural Police’s First Investigative Division. Affectionately called Neko-san, he is the life of the team. He supports the team with his wealth of experience from working in a police box and familiarity with Kanagawa Prefecture. He is always calm and often soothes his colleagues. But he understands the possibility of a wrong charge in a case he was in charge of in the past. He overrides the opposition of the people around him and begins to reinvestigate on his own in order to save the life of the death row convict. He has the strongest sense of justice and even goes against the police organisation.

Miura Tomokazu as Motoki Hidetoshi
A superintendent of Kanagawa Prefectural Police’s First Investigative Division and deputy division manager. The leader of the team, he is a dependable boss. Although he is stern, he constantly thinks about his subordinates rather than his own position. The release of a gang member – the first man that he arrested in his younger days 30 years ago, spurs him to pursue an unsolved case. In his private life, he is divorced and hopes to meet the granddaughter that his estranged daughter has given birth to.

This blog contains information and musings on current and upcoming Japanese dramas but is not intended to be comprehensive.
View all posts by jadefrost →
This entry was posted in Fall 2018 Dramas, WOWOW and tagged Cold Case Series, Mitsuishi Ken, Miura Tomokazu, Nagayama Kento, Takito Kenichi, Yoshida Yo. Bookmark the permalink.