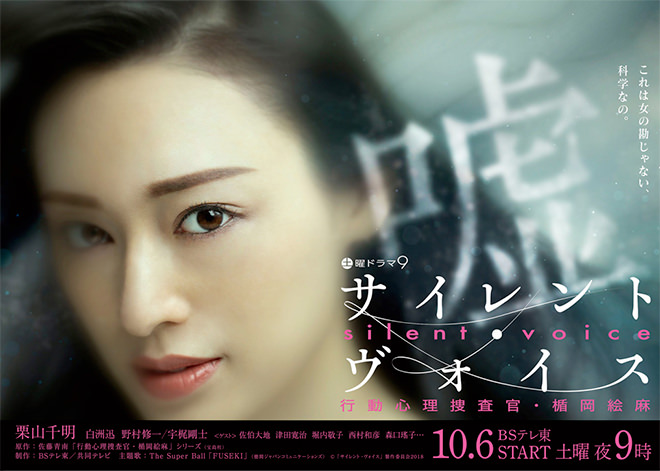 Story
Several days have passed since a girl was kidnapped and the suspect Sakita Hiroshi has maintained his silence. In the interrogation room, veteran detective Tsutsui Michihiro tries to make Sakita confess and proceeds with the interrogation as if clutching at something. Beside him, note-taker Nishino Keisuke nervously records the proceedings. In the middle of this, a gorgeous beauty suddenly shows up in the interrogation room. Nishino is flustered by the sudden appearance of an outsider. However, she smiles at him and introduces herself as Tateoka Ema, the person in charge of the interrogation. Sakita is captivated by her beauty. Ema is a detective who uses behavioural psychology to make suspects confess. She settles down to interrogate Sakita who forgets where he is and cracks jokes. Ema flirts with Sakita and their exchange drags on. Meanwhile, a dismembered dead body has been discovered in Tokyo around the same time as the kidnapping of the girl. The body parts are scattered in various places in what is clearly a murder case. The First Investigative Division has put many investigators on this case and is short-handed. Even so, Ema continues her conversation with Sakita in the interrogation room. Then she gradually shifts to the topic of the case. It was not merely idle talk. Ema had been observing Sakita’s instinctive expressions and gestures closely as she talked to him. After determining that she has observed him sufficiently, her attitude completely changes and she goes on the offensive.

Characters
Kuriyama Chiaki as Tateoka Ema
A police sergeant with the Tokyo Metropolitan Police Department’s First Investigative Division. She is an interrogation specialist who uses behavioural psychology to make suspects confess and boasts a 100% success rate. She can see through the lies of suspects by reading their “micro-gestures”. Any suspect whom she targets will eventually be forced to make a confession. Interrogations of tough suspects that veteran detectives are at a loss to handle, is not limited to the cases of the Criminal Affairs Division. She boasts that there is not a person whose lies she has not been able to detect, and is called Enma-sama (King of Hades) because of this ability. She proclaims herself a “forever 28” who seeks the perfect marriage partner.

Shirasu Jun as Nishino Keisuke
A detective of the Tokyo Metropolitan Police Department’s First Investigative Division. He eagerly tries to get involved in investigations, but finds himself at the mercy of an old-fashioned detective from hell and female detective who is absolutely hard to imagine as a detective.

Ukaji Takashi as Tsutsui Michihiro
A veteran detective of the Tokyo Metropolitan Police Department’s First Investigative Division. A compassionate man and the type who acts on his instincts. He is old-fashioned in his investigation approach and regards Tateoka Ema as a rival.

This blog contains information and musings on current and upcoming Japanese dramas but is not intended to be comprehensive.
View all posts by jadefrost →
This entry was posted in BS Japan, Fall 2018 Dramas and tagged Kuriyama Chiaki, Silent Voice Series. Bookmark the permalink.