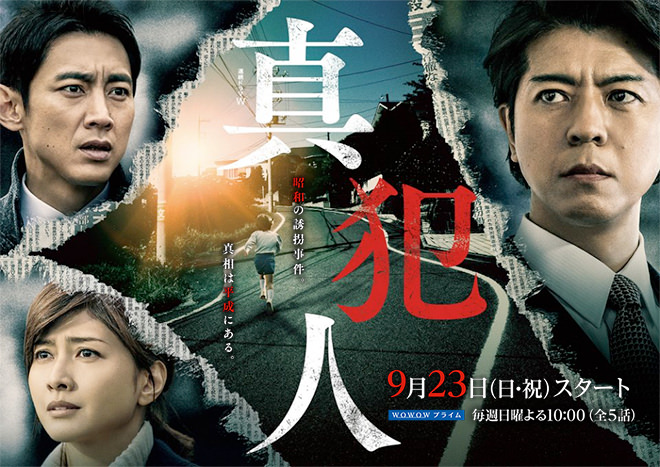 Story
The murder of Sudo Isao, a used car dealer, occurs under an overhead highway in Shizuoka Prefecture in 2008. Detective Kusaka Satoru of the Shizuoka Prefectural Police’s Susuno Precinct investigates this case. He learns that Sudo and his ex-wife had a young son Obata Mamoru who died in a kidnapping incident in Shizuoka in 1974. In 1988, with just one year before the statute of limitation on the kidnapping case runs out, a special investigation unit is formed under the instructions of the Shizuoka Prefectural Police’s police chief Hashibami Yasuhide. Shigeto Seiichiro, who rose to the rank of superintendent despite being a non-career officer, becomes the director and led a group of six capable detectives in the re-investigation. Kusaka cannot comprehend why Sudo, who lived in Tokyo more than 20 years after the death of his son, was murdered in Shizuoka Prefecture. He instinctively knows that delving into the kidnapping and murder of the child will shed light on the case. Kusaka visits Shigeto who has left the police for a long time and searches for clues. He makes contact with Mamoru’s mother Saeko and her older sister Rie, and gradually draws near the truth.

Characters
Kamikawa Takaya as Shigeto Seiichiro
The director of a special investigation unit and the detective who investigated the kidnapping and murder which occurred in 1974. In 1988, he led a team of six capable detectives as the statute of limitation loomed and committed to solving the case.

Koizumi Kotaro as Kusaka Satoru
An assistant inspector of Fuji Susuno Police Precinct’s Criminal Investigation Division. The detective investigating a murder case that happened in 2008. The key to solving the case is a kidnapping and murder during the Showa era and he asks for the assistance of retired detective Shigeto Seiichiro.

Uchida Yuki as Obata Rie
Obata Mamoru’s older sister. She hopes that the family ties which were strained by the case will be mended. Because she was only seven at the time of the incident, she only has a fuzzy recollection and has been anguished for a long time.

Takashima Masanobu as Hashibami Yasuhide
The chief of the Shizuoka Prefectural Police. He appoints Shigeto Seiichiro to be the director of the special investigation unit, to avoid having the blot of the unsolved case. He is a hard-nosed, ambitious man and puts a lot of pressure on Shigeto.

This blog contains information and musings on current and upcoming Japanese dramas but is not intended to be comprehensive.
View all posts by jadefrost →
This entry was posted in Fall 2018 Dramas, WOWOW and tagged Kamikawa Takaya, Koizumi Kotaro, Komoto Masahiro, Omi Toshinori, Shinhannin, Takashima Masanobu, Uchida Yuki. Bookmark the permalink.