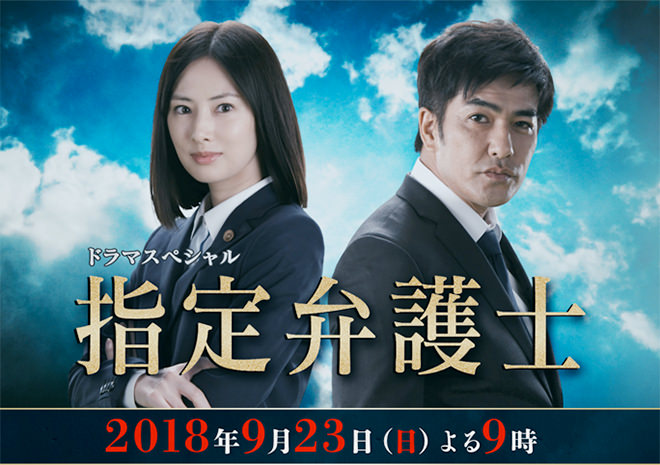 Date: From 9.00 p.m., 23 September 2018
Scriptwriter: Sakurai Takeharu (Kasouken no Onna Seasons 12 – 16, Kami no Shita o Motsu Otoko, Yamegoku)
Genre: Legal
Cast: Kitagawa Keiko, Kitamura Kazuki, Enari Kazuki, Namase Kazuhisa, Matsushige Yutaka, Hada Michiko, Aijima Kazuyuki, Yashiba Toshihiro, Masana Bokuzo, Matobu Sei, Ishibashi Renji, Nakamura Baijaku
Synopsis: Hitotsugi Yui (Kitagawa Keiko) is an outstanding lawyer who works for the law firm Mitsuzuka, and has her eye on becoming a partner. On this day, she is watching the television with her boss Mitsuzuka Fuminori (Nakamura Baijaku) at their Kyoto office. Tagane Seizo (Ishibashi Renji), a lawmaker of the Lower House and former Minister of Justice, is the subject of a talk show which frequently covers lawmakers who have made many controversial remarks. Yui’s husband Takashi (Enari Kazuki), who is a paralegal, and the lawyer Yanai Kotaro (Yashiba Toshihiro) are also in the office. The ambitious Yui and Yanai are fighting to become a future partner of the law firm. There is another allegation against Tagane about impropriety in the sale of state-owned land to Tatsunami Welfare Association, a social welfare service organisation, in 2010. It is also turns out that Tagane had served as an honorary adviser to the association and there is a storm of public opinion against him. The Special Investigation Department of the Osaka District Public Prosecutors Office is pressured to act and moves to investigate. Tagane and his secretary Saito Masumichi are arrested. But in the end, both of them are not prosecuted. Tachibana Shinji (Kitamura Kazuki) and Shirai Itsuo (Aijima Kazuyuki) from the Special Criminal Investigation Department at the Kyoto District Public Prosecutors Office receive the outcome and can only watch the news with grim expressions. Meanwhile, Yui is asked by her lawyer friend Kanbayashi Kyoko (Hada Michiko) if she would like to try being a court-appointed lawyer. The accused is none other than Tagane. Although the case was dropped, this decision was overridden at a prosecution inquest committee. Should the same decision be reached at another prosecution inquest committee, Tagane will face mandatory indictment by a court-appointed lawyer. Reasoning that she will gain fame and get closer to the position of Mitsuzuka’s partner, if she can prosecute Tagane, who is now the “enemy” across Japan, Yui agrees to be the court-appointed lawyer. However, she is forced to resign from the law firm for going against Mitsuzuka. She teams up with Tachibana to pursue the truth. But It is a very difficult assignment to overturn a case that the prosecution had judged not guilty. Furthermore, Tachibana treats court-appointed lawyers who indict cases on the many occasions that prosecutors dismiss them, like the enemy. An unexpected truth is concealed behind great power.
Official Website: www.tv-asahi.co.jp/shiteibengoshi

This blog contains information and musings on current and upcoming Japanese dramas but is not intended to be comprehensive.
View all posts by jadefrost →
This entry was posted in Summer 2018 Drama Specials, TV Asahi and tagged Kitagawa Keiko, Kitamura Kazuki, Matsushige Yutaka, Namase Kazuhisa, Shitei Bengoshi. Bookmark the permalink.