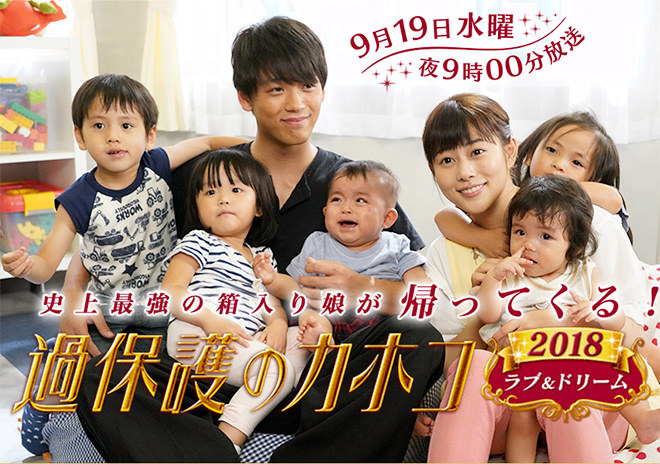 Date: From 9.00 p.m., 19 September 2018
Scriptwriter: Yukawa Kazuhiko (Gisou no Fuufu, Marumaruzuma, Kaseifu no Mita)
Cast: Takahata Mitsuki, Takeuchi Ryoma, Kubota Sayu, Kuroki Hitomi, Hamada Mari, Emi Kurara, Nakajima Hiroko, Umezawa Masayo, Tokito Saburo, Sato Jiro, Nishio Mari, Shukugawa Atom, Mita Yoshiko, Nishioka Tokuma, Hiraizumi Sei
Synopsis: It has been one year since the very sheltered Nemoto Kahoko (Takahata Mitsuki) left the nest of her overprotective parents Masataka (Tokito Saburo) and Izumi (Kuroki Hitomi), and married aspiring artist Mugino Hajime (Takeuchi Ryoma). Life was supposed to have been fulfilling. But Kahoko House, the facility for children that she started with her paternal grandparents Masaoki (Hiraizumi Sei) and Tae (Umezawa Masayo) and aunt Noriko (Hamada Mari), is exhausting work and losing money. Kahoko has to do the housework in the house that she lives with Hajime and her maternal grandfather (Nishioka Tokuma) by herself. To top it off, she has to prepare for her cousin Ito’s (Kubota Sayu) birthday party this weekend. She is completely stretched thin. Meanwhile, Mami (Emi Kurara), the mother of an elementary school student Mamoru (Yokoyama Ayumu) who attends Kahoko House, shows up all of a sudden and declares that she is taking him back. Mami has the habit of abandoning her son each time she has a boyfriend and comes back only when she is dumped. Kahoko attacks her verbally but is anxious about Mamoru, who had an uneasy look on his face. She cannot think of anything else. In the end, preparations for Ito’s birthday proceed because of Izumi who always appears at the critical moment and gets her daughter’s work done. However, during the celebrations, Ito’s mother Setsu (Nishio Mari) announces that Ito is going to study in Vienna to become a conductor and that causes conflict. Izumi who harps on the fact that Hajime still works part-time and has not gained success as an artist, presses Kahoko and him about children. Each family’s problems blow up at the birthday party that everyone had been looking forward to. Kahoko turns to her father for help, but Masataka is troubled about work. He reveals that he is thinking of quitting his company and living in the countryside. Her parents have not had something common to talk about since Kahoko got married, and Masataka has not been able to consult Izumi about it. That night, a gaunt Mamoru appears at Kahoko’s house. Kahoko and Hajime are concerned but Mami has prioritised a trip with her boyfriend because she “wants to be a woman before she is a mother”. In addition, Kahoko is asked by her father, who says he has resigned, to be present at a discussion between her parents. But Izumi is strongly opposed to leaving Kahoko and moving to the countryside. The situation gets ugly and they fix their seals to divorce papers. Besides that, Kahoko finds out that there has been a drastic fall in the number of children at Kahoko House because of a licensed childcare centre nearby. Noriko closes down Kahoko House and tries to sell the building. Seeing Kahoko at her wits end over her parents’ impending divorce and collapse of her workplace, Hajime suggests that he give up on his dream which Izumi will take comfort in. Kahoko will also be able to look after the family and children. However, Kahoko snaps that he has lost confidence in producing good art and is using her as an excuse to run away from his dream. They get into their first big quarrel as a couple and Hajime storms out. As if replacing him, Izumi shows up. She says love and dreams are incompatible, and her over-protectiveness is rekindled as she tries to make Kahoko live with her. Will Kahoko be able to make good on her promise to “protect the family” to her late grandmother (Mita Yoshiko)?
Official Website: www.ntv.co.jp/kahogo-kahoko/special2018

This blog contains information and musings on current and upcoming Japanese dramas but is not intended to be comprehensive.
View all posts by jadefrost →
This entry was posted in NTV, Summer 2018 Drama Specials and tagged Hiraizumi Sei, Kahogo no Kahoko Series, Kuroki Hitomi, Sato Jiro, Takahata Mitsuki, Tokito Saburo, Yukawa Kazuhiko. Bookmark the permalink.