Posted on September 9, 2018 by jadefrost 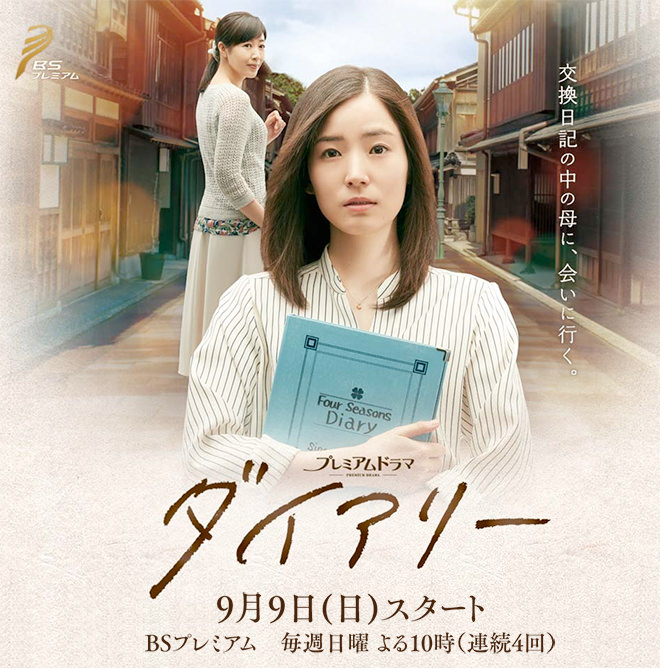 Story
Miyata Ayaka works at a stationery manufacturer and is engaged to her colleague Hiyama Yuichi. However, she is reluctant to inform her mother Harumi. Ayaka has lived apart from Harumi ever since they had a big argument when she was 20. Harumi has dodged the identity of Ayaka’s father from the time she was a child. One day, Yuichi forces Ayaka to inform her mother, and Harumi appears at the company the next day to assess whether Yuichi will make a suitable husband. Yuichi happens to show up and she takes him to a pub. The two of them get along very well and it is decided that she will come for the wedding dress fitting. However, on that day, Harumi is rushed to hospital after collapsing from a sudden brain haemorrhage. She does not regain consciousness even after three months. Meanwhile, Ayaka learns about her mother’s living will from a nurse and discovers that she had been exchanging diaries between her classmates from high school days. She travels to her mother’s hometown of Kaga City in Ishikawa Prefecture with the diary as her guide. The lies and hard facts written in the diary by the women, lead her to true happiness.

Characters
Renbutsu Misako as Miyata Ayaka
She works at a stationery manufacturer. She knows nothing about the past of her single mother Harumi let alone her father, and their relationship gradually deteriorated. She wonders why her mother had her and hides feelings that she is unloved.

Kikuchi Momoko as Miyata Harumi
Miyata Ayaka’s mother. She has been working at a nursing home. She believed in raising her daughter if she was strong. But she has never told Ayaka about her father or own family because she is conscious of causing trouble. She has been exchanging diaries with her classmates from high school days in her hometown of Ishikawa Prefecture for 28 years.

Nakamura Aoi as Hiyama Yuichi
Miyata Ayaka’s fiance and senior at the stationery manufacturer where she works. He speaks what is on his mind and cannot read situations. He grew up in a wealthy family and is a mummy’s boy and cannot go against his mother who dotes on him. He is ridiculed by his strong-minded older sister who calls him “unreliable when it comes to the crunch”.

Otsuka Nene as Takano Chinatsu
Miyata Harumi’s good friend from high school days and one of the members of the diary exchange. She saved a Kaga Yuzen studio from debt with her family’s wealth and married Takano Makoto, the fourth generation artist. She has undergone fertility treatment but cannot have children and this has cast a pall on her relationship with her husband.

Hamada Mari as Takase Akie
Miyata Harumi’s good friend from high school days and one of the members of the diary exchange. She now has a 20-year-old son and is the head nurse of the general hospital in Kanazawa.

Nishida Naomi as Tanimura Fuyuko
Miyata Harumi’s good friend from high school days and one of the members of the diary exchange. She is single and a Japanese language teacher at a junior high school. She has a tendency to be drawn to useless men.

Yamamoto Yoko as Miyata Makiko
Miyata Harumi’s mother. She has never met her granddaughter Ayaka. She runs a traditional inn in Kaga City and entrusts Harumi’s younger sister Naomi with the work of the proprietress.

This blog contains information and musings on current and upcoming Japanese dramas but is not intended to be comprehensive.
View all posts by jadefrost →
This entry was posted in NHK, Summer 2018 Dramas and tagged Diary, Nakamura Aoi, Nishida Naomi, Otsuka Nene, Renbutsu Misako. Bookmark the permalink.