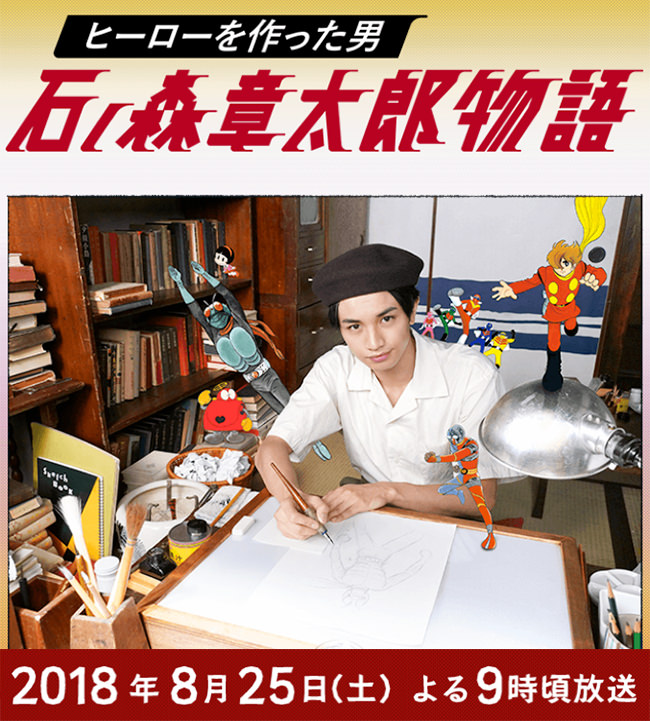 Date: From 9.00 p.m., 25 August 2018
Scriptwriter: Fukuhara Mitsunori (Makanaiso Series, Ofukou-san)
Cast: Nakajima Kento, Kimura Fumino, Hayashi Kento, Ohno Takuro, Nakata Keisuke, Sakumoto Takara, Matsukawa Naruki, Miyazaki Shuto, Seiko, Mizuno Maki, Sugimoto Tetta, Bakarhythm, Karasawa Toshiaki (guest star)
Synopsis: In April 1956, 18-year-old Ishinomori Shotaro (Nakajima Kento) graduates from high school with dreams of becoming a manga artist. He heads to a waiting car which will take him from his hometown in Miyagi Prefecture to Tokyo. Shotaro’s older sister Yoshie (Kimura Fumino) has come to send him off. The asthmatic and frail Yoshie is the only person in the family to support him and has the habit of saying, “I want you to do what you like for me too.” At this time, Shotaro has not yet realised the longing in those words. Yoshie was the one who got him started on drawing manga. There was little in the way of amusement during their childhood right after the war. Shotaro would always be with Yoshie. He spent a lot of time in her room, making her read books to him and creating handmade books together. When he was 12, Shotaro was captivated by a Tezuka Osamu manga that Yoshie showed to him. From then on, he would draw manga and his pieces delighted her the most. As a high school student, Shotaro was summoned by that Tezuka Osamu (Bakarhythm) who was under pressure to meet a deadline, and visited his place. He seize the opportunity to make his debut in Tokyo. But his father (Sugimoto Tetta) was strongly opposed to him ruining his life with his decision to become a manga artist. A manga artist was still considered an occupation with no future. Back in 1956, the person who had been waiting in the car is the young Akatsuka Fujio (Hayashi Kento) who had contributed to Shotaro’s fan publication and would later produce several hits including the manga Tensai Bakabon. Shotaro produces a string of young people who would lay the groundwork for Japan’s manga and anime culture, and lives at Tokiwa-so which would become the mecca of manga artists. A new adventure with Terada Hiroo (Ohno Takuro), Fujiko F Fujio and Fujimoto Hiroshi (Nakata Keisuke) was about to begin. Then one summer’s day, Yoshie comes to check on Shotaro using her asthma treatment as an excuse. This is the “Warring States period” for manga publications. She learns from Akatsuka that at a time when many manga artists can no longer draw due to anxiety, Shotaro continues without hesitation because he has been looking forward to get her to read his. After that, Yoshie officially moves into Tokiwa-so to support him. But one day in 1958, she passes away from a seizure just shy of her 23rd birthday, and Shotaro’s youth abruptly comes to an end. Chewed up by regret and grief, he flees abroad. During that bewildering time, Shotaro thinks his hurt will not heal but … …
Official Website: www.ntv.co.jp/24h/drama2018

This blog contains information and musings on current and upcoming Japanese dramas but is not intended to be comprehensive.
View all posts by jadefrost →
This entry was posted in NTV, Summer 2018 Drama Specials and tagged Hero o Tsukutta Otoko Ishinomori Shotaro Monogatari, Kimura Fumino. Bookmark the permalink.