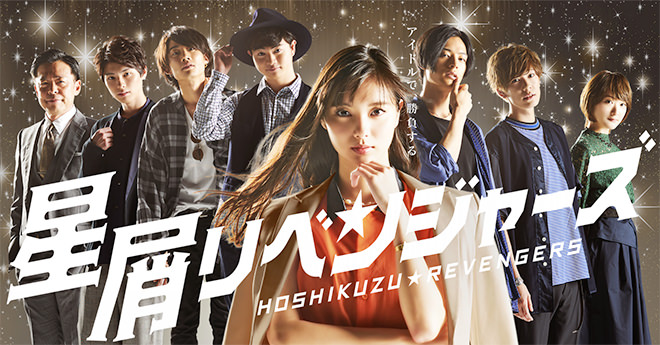 Story
Kusunoki Haru is a popular instagrammer with 70,000 followers and enjoys a life of luxury. One day, she receives an entertainment agency, Click Promotion, as a birthday present from a CEO who is an acquaintance. However, this agency is mired in debt and all that remains is an employee, Mano Akari, and a struggling five-member male idol group called Transition. Although Haru has been tricked, the contract was formalised so she loses everything in an instant and ends up burdened with a lot of debt. In a sudden reversal, Haru goes from a winner whom everyone envies to someone mocked by the people around her. She is inundated with abusive comments on instagram, and contracts are terminated by clients. Even Kuroda Sae, a junior who had admired Haru, keeps a distance. Haru considers whether to shut down the agency but abandons the idea after looking at the profile photos of Transition. They were the idol group that she was obsessed with during high school days. She summons them right away but the five guys who show up in front of her are hardly recognisable with gloomy faces like the dead. Haru learns that they have not had any work since they moved from a large agency three years ago and have been on a hiatus. She vows to give them a comeback but what awaits her is a harsh baptism into the world of entertainment.

Characters
Shinkawa Yua as Kusunoki Haru
She makes money as a popular instagrammer and posts about her life on social media daily. She is beautiful and also active as an amateur model sometimes. An incident results in her becoming the producer of a five-member male idol group and she tries everything to go from zero to success in the entertainment industry. Her belief is that “There is nothing in this world that is unnecessary. It has only been put to the wrong use.”

Morinaga Yuki as Yuki Fumito
He is typically mild and earnest. He appears weak but actually has fortitude and at times, he has the nerve to firmly assert his opinions. He is the only one in among the five who debuted without paying his dues. As a result, he was initially bashed by fans for dragging the group down. He worked harder than anyone else and is now good at both singing and dancing.

Shiono Akihisa as Hayami Yuya
The lead of the group. He is cool and not very cooperative, but has his own convictions. An honest person, he is terribly awkward. He may be an idol but has a principle of not doing things that run counter to his beliefs such as unabashedly flattering fans. However, he feels grateful to them. He also has charisma and is keenly aware to be the perfect lead.

Hanazawa Masato as Izumi Ryotaro
The oldest member of the group who is like an older brother. He has been active in the entertainment industry since childhood and belonged to a different idol group in the past. He joined Transition after that group was disbanded. He treats staff and co-performers with courtesy because he knows the harshness of the industry as well as the difficulty of being a group. On the other hand, he also suppresses his own feelings because reads too much into situations.

Naito Shuichiro as Maezawa Taichi
He is cheerful and the life of the group. He always smiles and is also friendly which makes him popular among fans. He is popular with TV viewers for his lovable character and has the fewest haters in the group. However, at times he can be a troublemaker too because he gets full of himself when praised.

Honda Kyoya as Komiyama Riku
The only university student in the group. He decided to go on to university while the group was still popular. He has a good upbringing and refined manner. Coupled with his looks as a fine young man and academic achievements, he is popular with housewives. He is now in his fourth year in university and has actually received several unofficial job offers. He agonises over whether to finding employment or idol activities.

Mitsuishi Ken as Tonaga Shuichiro
The CEO of Tonaga Production which is a major entertainment agency. He is an influential figure in the entertainment world and did many dirty things to get where he is today. Although he was the person who nurtured Transition, they were transferred in order to “step up”. He has a big heart and a deep sense of duty and compassion. But he is a realist who will mercilessly cut down people. The current mood of the people and media trends around the entertainment industry alarm him. Then the unusual Kusunoki Haru appears. He learns that she is Transition’s producer and is concerned that entertainment norms which he believes in might be destroyed.

Fuchikami Yasushi as Makino Takaya
The CEO of the live streaming service, 17 Live. Business is essentially his top priority and he has a dispassionate side where he would discard people. However, he is looking for people and services that are real and not invented. Kusunoki Haru, who faces adversity, attracts him both as a business and as a man.

Sano Hinako as Kuroda Sae
A model and gravure idol. She once won the top prize in a contest held by an agency and there were great expectations at that time. However, she is now in obscurity. She got acquainted with Kusunoki Haru through a magazine project and they formed a friendship. But she in fact feels intensely inferior and jealous of Haru, and this blows up later. Because he grew up in poor conditions, she has the hunger and nerve to do anything in order to be popular.

This blog contains information and musings on current and upcoming Japanese dramas but is not intended to be comprehensive.
View all posts by jadefrost →
This entry was posted in AbemaTV, Summer 2018 Dramas and tagged Hoshikuzu Revengers. Bookmark the permalink.