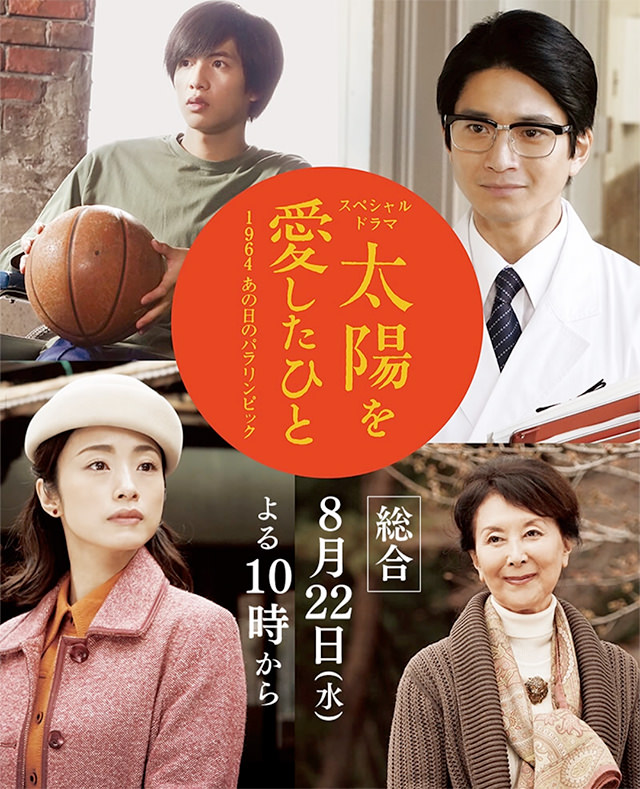 Date: From 10.00 p.m., 22 August 2018
Scriptwriter: Yamaura Masahiro (Miss Devil, Zenigata Keibu Series, Umi ni Furu)
Original Work: Taiyo no Nakamatachi yo by Saegusa Yoshihiro
Cast: Mukai Osamu, Ueto Aya, Shison Jun, Ando Tamae, Iitoyo Marie, Yamaguchi Makiya, Onoe Matsuya, Tayama Ryosei, Matsushige Yutaka, Kishi Keiko
Synopsis: In 1960, Nakamura Yutaka (Mukai Osamu), an orthopaedic surgeon from the government-run hospital in Beppu, trains in England and learns medical care which incorporates sports for people with disabilities. “Don’t count what has been lost, make the best use of what remains.” These words would later motivate him through life. After Nakamura returns to Japan, he tries to promote sports for people with disabilities. But the word “rehabilitation” did not yet exist in Japan at this time. He even encounters resistance from colleagues. Nevertheless, a meeting with Tsuchiyama Akira (Shison Jun), a youth who ended up wheelchair-bound because of an accident during an extracurricular activity, slowly leads to the popularisation of wheelchair basketball. Nakamura’s surprising goal is to bring the second Paralympics to Tokyo. Social norms get in his way once again. Even the families of people with disabilities protest against making a spectacle of these people. However, Nakamura gradually makes a breakthrough with the support of his family and friends. He is responsible for the success of the 1964 Tokyo Paralympics and dedicates his life to the rehabilitation of people with disabilities.
Official Website: www.nhk.or.jp/dsp/taiyo

This blog contains information and musings on current and upcoming Japanese dramas but is not intended to be comprehensive.
View all posts by jadefrost →
This entry was posted in NHK, Summer 2018 Drama Specials and tagged Taiyo o Aishita Hito. Bookmark the permalink.