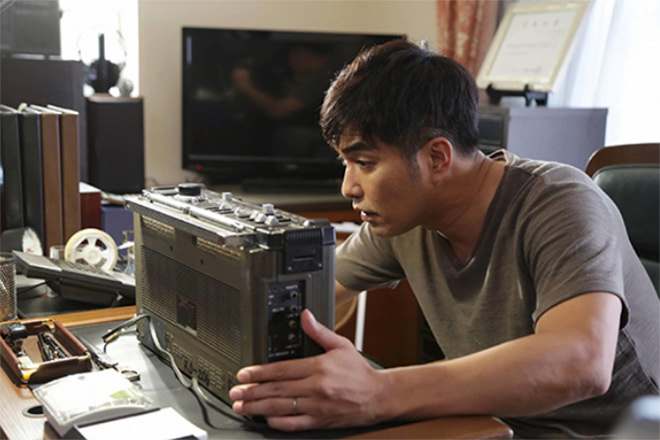 Mienai Ori
Story: Sasaki Yusuke (Kamiki Ryunosuke) works for a real estate company. This is the third year since he joined and he has finally settled into his job. One day, Iguchi Marie (Uchida Rio), Yusuke’s classmate from university days, visits the real estate company. She wants to find a place where she can live together with Komada Kazuya (Okayama Amane), a former classmate from the same university. Yusuke has difficulty finding an apartment that matches Kazuya’s criteria for rent and proximity to a train station. In the end, Kazuya asks him to introduce a place that has been. Not knowing the background, Marie takes a liking to it and they begin to live there. A man had hung himself inside the closet in that apartment some time ago. One day several months later, Yusuke visits. Marie is haggard and he finds Kazuya’s behaviour abnormal.
Cast: Kamiki Ryunosuke, Uchida Rio, Okayama Amane

Mushiri Torareta Ibasho
Story: Murata Kumiko (Nanao), a nurse who works for a hospital’s department of internal medicine, does not know what to do with an elderly patient called Igarashi Tokuji. Although potted plants are prohibited in the wards because of the risk of bacteria getting into the hospital, he is fixated about having a pot of black bamboo in the ward. Igarashi lets go of this idea after Kumiko persuades him against it. But while seeming to deliriously mutter that he wants to go back because the black bamboo feels lonely, he passes away. Kumiko senses something unusual about this black bamboo. Following Igarashi’s death, Kumiko takes the black bamboo to her home. One night when Kumiko is sleeping, she can hear the sound of a cat, that is not supposed to be there, calling.
Cast: Nanao, Iitoyo Marie, Ono Takehiko

Naniwa Shinreido
Story: An incident occurs when Yoshiko (Yoshiko) still has no work as an entertainer and works part-time at a bar. She exchanges contact numbers with Shibazaki Yuji, who was brought by a regular customer, also on the recommendation of Chika-mama (Yo Kimiko). Several days later, Yoshiko receives a message from Shibazaki asking if she is free the next day. She thinks he has asked her out on a date, but she is taken to his father’s home. His father passed away not long ago and Shibazaki wants her to help organise the old man’s personal effects. Yoshiko works diligently. Shibazaki gifts her a string of black prayer beads as a keepsake from his father. Yoshiko is overjoyed to receive her first present from a man. But queer incidents start occurring frequently in the room which she shares with her partner, Mahiru (Mahiru) … …
Cast: Yoshiko, Mahiru, Yo Kimiko

Usuyami ni Ukabu Inei
Story: High school student Kaneko Hatsumi (Taira Yuna) has just moved to the countryside because her parents relocated for work. She still cannot get used to this new place. One summer’s day, Hatsumi tries to take a path that is different from usual and ends up losing her way on a mountain trail. The next thing she knows, a woman with long hair approaches eerily.
Cast: Taira Yuna

Sugatami
Story: Kondo Moe (Aoi Wakana) has just started working part-time at a family restaurant. She makes the acquaintance of Fujimoto Yuko (Imada Mio), a colleague who is the same age, and they become friends. Moe receives a full-length mirror from Yuko as a gift and places it in her room. But one night, when she is sleeping, something unusual happens … …
Cast: Aoi Wakana, Imada Mio, Sakurada Dori, Miyazawa Takemi, Sakurai Yuki

Hate kara no Nenpa
Story: Nakai Toshihide (Kitamura Kazuki) who is an accountant, visits a recycle shop one day. He is drawn to an antique short-wave radio and buys it. After he returns home, he turns on the radio and he can hear the moans of a person. This is in fact the voice of the previous owner of the radio who died several years ago.
Cast: Kitamura Kazuki, Yoshida Yo

This blog contains information and musings on current and upcoming Japanese dramas but is not intended to be comprehensive.
View all posts by jadefrost →
This entry was posted in Fuji TV, Summer 2018 Drama Specials and tagged Honto ni Atta Kowai Hanashi Series, Kamiki Ryunosuke, Kitamura Kazuki, Yo Kimiko, Yoshida Yo. Bookmark the permalink.