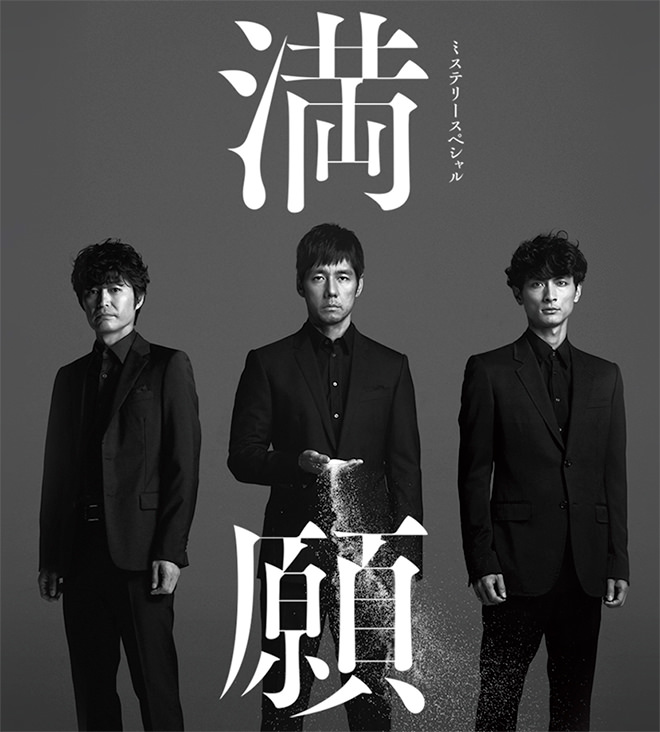 Mandou
Date: From 10.00 p.m., 14 August 2018
Story: Itami Shuhei (Nishijima Hidetoshi) works for a trading company involved in oil and gas field development in Southeast Asia. He is facing a predicament. He has been held back by the local people who oppose the acquisition of the land. Then he receives a letter from them. Their opinions are divided on the issue and the elders want money. The elders demand that Itami and Morishita Seiji (Kondo Koen) who works for a rival company, kill the leader of the opposing camp.
Scriptwriter: Oishi Tetsuya (Shitsuji Saionji no Meisuiri, Kirawareru Yuuki, Scapegoat)
Cast: Nishijima Hidetoshi, Kondo Koen

Yakei
Date: From 10.00 p.m., 15 August 2018
Story: Yanaoka Kiyoshi’s (Yasuda Ken) young subordinate Kawato Hiroshi (Baba Toru) is killed in the line of duty when he gets involved in a couple’s dispute that escalated into bloodshed. Kawato risked his own life to protect the wife from her husband and his actions are praised by the public. However, Yanaoka feels something is wrong. Kawato is not the type to sacrifice his own life. Then he recalls the series of queer incidents since morning on that fateful day and the suspicious accident at a construction site near the police box.
Scriptwriter: Oishi Tetsuya (Shitsuji Saionji no Meisuiri, Kirawareru Yuuki, Scapegoat)
Cast: Yasuda Ken, Baba Toru, Yoshizawa Hisashi

Mangan
Date: From 10.00 p.m., 16 August 2018
Story: Ukawa Taeko (Ichikawa Mikako) withdraws her court appeal on a murder case even though the lawyer Fujii had insisted on an appeal. Taeko is the kind and beautiful proprietress of a boarding house that took care of Fujii during his student days. Back then, Fujii struggled student to put himself through school. He could become a lawyer because he had Taeko’s support. However, the family struggled financially because of her husband Shigeharu’s (Terajima Susumu) debt. One day, Taeko killed the moneylender when he forced them to make repayment. Why did she do it?
Scriptwriter: Kumakiri Kazuyoshi
Cast: Kora Kengo, Ichikawa Mikako, Terajima Susumu

This blog contains information and musings on current and upcoming Japanese dramas but is not intended to be comprehensive.
View all posts by jadefrost →
This entry was posted in NHK, Summer 2018 Drama Specials and tagged Kora Kengo, Mangan, Nishijima Hidetoshi, Yasuda Ken. Bookmark the permalink.