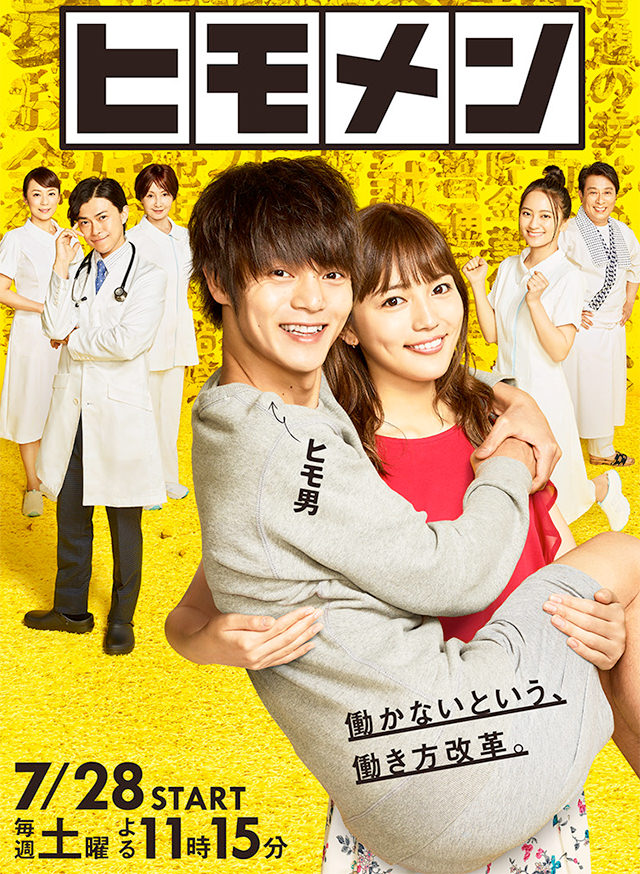 Story
It has been three weeks since 28-year-old Himonya Sho got kicked out of his parents’ home and moved into the apartment of his girlfriend Kasuga Yuriko who works as a nurse. Her colleagues envy her for having a handsome boyfriend. However, Yuriko has a secret that she cannot tell anyone. Sho has no job and lives off her money. He wants to enjoy life as much as possible. Besides having completely no intention of working, Sho is too lazy to even take out the rubbish when asked by Yuriko. Yuriko vents her frustration about her current situation at him. Her expenses have increased ever since he came to stay at her apartment and her savings have also been depleted. Hearing that, Sho immediately flies out of the house. Yuriko is happy that he finally seems willing to get a job but the decisive action that Sho takes when a crisis hits her life, is to do all in his power to prevent it because a crisis for her equates a crisis for his life as freeloader. Although Yuriko is let down by Sho countless times, she considers the issue of work, love and money and finds answers in her own way. Will she be able to change Sho and attain happiness?

Characters
Kubota Masataka as Himonya Sho
He got kicked out of his parents’ home and came to live with his girlfriend Kasuga Yuriko. His love for Yuriko and his fervour against work is second to none. But he feels no guilt about being a freeloader and is completely useless as a househusband. At times, he comes up with ideas of becoming an artist or a programmer and pursues these absurd dreams, only to give up in seconds. Because of his good looks, he is able to act like the kind, handsome boyfriend in front of Yuriko’s friends. When a crisis hits Yuriko’s life, he will do all in his power to prevent it.

Kawaguchi Haruna as Kasuga Yuriko
Himonya Sho’s girlfriend. A nurse who works at a hospital. She is excellent at her work and has been given an important position at a young age. She also has the stamina to withstand the hard work. Her superiors and juniors find her a very approachable person. She is a sensible person, but on the other hand, is quite trusting. As a result, she supports Sho’s absurd dreams only to feel immediately disappointed. Her childhood dream was to be the bride of a wonderful prince but that is far from reality. Her goal is to get married after she makes Sho start working but … …

Katsuji Ryo as Ikeme Ryosuke
An outstanding doctor who works at the same hospital as Kasuga Yuriko and is romantically interested her. He is trusted by the people around him, considerate of nurses and on top of that, has a high salary – literally the complete opposite of Himonya Sho. Because he is handsome and single, he is popular with both patients and nurses. But he is actually a vindictive, jealous and difficult person. He plots all sorts of tricks in an attempt to take down Sho in order to date Yuriko, and gradually falls into the dark side.

Okada Yui as Hamano Konomi
Kasuga Yuriko’s junior. A rookie nurse whose personal life rather than work is her priority, she is keen on pushing work to her seniors. She is well-liked by patients and male staff because she is friendly. She is the type who eagerly pries into everything. She senses that Yuriko is hiding something and uses every possible means to expose her secret. Although she still does not know that Yuriko’s boyfriend Himonya Sho is mooching off her, she picks up on a “good-for-nothing scent” from Sho.

Sato Hitomi as Tanabe Satoko
A senior nurse who works at the same hospital as Kasuga Yuriko. She loves thoroughly useless guys and had a hard time in the past when she dated one who was financially dependent on her. So she is knowledgeable about such men. She understands Yuriko, who worries about rehabilitating Himonya Sho, the most, and is her confidant.

This blog contains information and musings on current and upcoming Japanese dramas but is not intended to be comprehensive.
View all posts by jadefrost →
This entry was posted in Summer 2018 Dramas, TV Asahi and tagged Himo Men, Katsuji Ryo, Kawaguchi Haruna, Kubota Masataka, YOU. Bookmark the permalink.