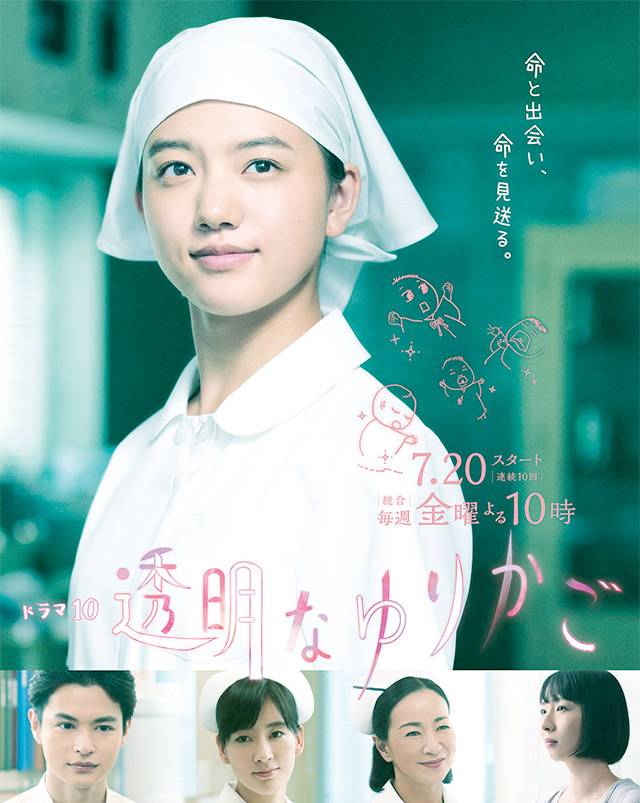 Story
In the summer of 1997, 17-year-old Aota Aoi, a third-year high school student who attends a nursing course, comes to Yui Obstetrics and Gynecology as a part-time trainee nurse. On her first day, Aoi is shaken after she sees an abortion procedure all of a sudden. She is also present for the birth of a baby and her emotions are stirred by the life force of the newborn child. The meticulous hospital director Yui Tomohiro, dependable senior nurse Mochizuki Sayako, genial head nurse Sakaki Mie and other staff give their full attention and support to each expectant mother. Aoi’s mother Fumika worries about her daughter who is awkward and poor at communicating. But Aoi supports the mothers-to-be with her own sensitivity and gentleness. One day, a pregnant woman who has not had prenatal care visits and disappears right after childbirth … …

Characters
Kiyohara Kaya as Aota Aoi
A high school student who attends a diploma course in nursing. She comes to Yui Obstetrics and Gynecology as a part-time trainee nurse. Because she is awkward and and poor at communicating, she thinks that she is unsure of people’s feelings but she has a unique sensitivity and is honest at heart.

Seto Koji as Yui Tomohiro
The head of Yui Obstetrics and Gynecology. He worked in a university hospital but had a thought and opened the hospital in his mid-30s. He appears dispassionate and also speaks harsh words. However, he treats all expectant mothers with care.

Sakai Wakana as Aota Fumika
Aota Aoi’s mother who is an insurance saleswoman. She and her husband are divorced and she lives with her daughter. She has been hard on Aoi who could not study and fit in with the people around her in her childhood. Even now, she feels a distance between her and her daughter for some reason.

Mizukawa Asami as Mochizuki Sayako
A senior nurse who guides Aota Aoi. She is strict but dependable and treats Aoi with gentle patience. Although she is married, she worries about whether she should have children.

Harada Mieko as Sakaki Mie
The veteran head nurse of Yui Obstetrics and Gynecology. She is calm no matter what happens and coordinates the hospital staff. She has been working with Yui Tomohiro since his time at the university hospital.

This blog contains information and musings on current and upcoming Japanese dramas but is not intended to be comprehensive.
View all posts by jadefrost →
This entry was posted in NHK, Summer 2018 Dramas and tagged Harada Mieko, Mizukawa Asami, Seto Koji, Toumeina Yurikago. Bookmark the permalink.