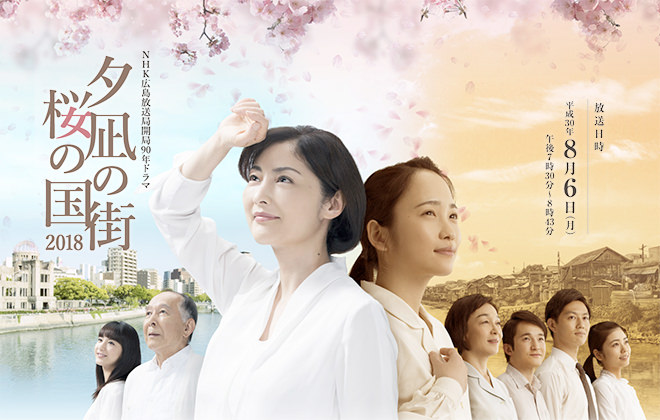 Date: From 7.30 p.m., 6 August 2018
Scriptwriter: Morishita Tadashi (Iryu Sousa Seasons 4 – 5, Ishikawa Goemon, Saikyou no Futari)
Original Work: Yunagi no Machi, Sakura no Kuni by Kouno Fumiyo
Cast: Tokiwa Takako, Kawaei Rina, Koshiba Fuuka, Taira Yuna, Kudo Asuka, Asari Yosuke, Tanihara Shosuke, Kashiwabara Shuji, Sagawa Mitsuo, Kimura Midoriko, Hashizume Isao
Synopsis: 46-year-old Ishikawa Nanami (Tokiwa Takako) is at the crossroads of life. An editor who works for a publisher, she lives with her 79-year-old father Akira (Hashizume Isao), and cannot seem to take the plunge and marry her boyfriend. A constant source of worry is the editorial department’s restructuring and Akira’s suspected dementia. One day, Nanami chases after her father when he leaves the house unsteadily without telling her where he is going. Her niece Fuuko (Taira Yuna) whom she has always been fond of, also joins in. It appears that she has run away from home. Akira’s destination is Hiroshima. Nanami and Fuuko follow him and realise that he is tracing someone. That person is his older sister who died because of the atomic bomb. The name of Nanami’s aunt is Hirano Minami (Kawaei Rina). Hiroshima was bombed when she was 13. But she lived there until 1955 when she was 23. Although Minami was traumatised, she met and fell in love with a young man (Kudo Asuka) at the construction company which was her workplace. Just when she took the first small step, the “atomic bomb” which she had forgotten, struck again. This unexpected journey to Hiroshima 63 years later in the summer of 2018 will reveal Minami’s tragedy.
Official Website: www.nhk.or.jp/hiroshima/drama

This blog contains information and musings on current and upcoming Japanese dramas but is not intended to be comprehensive.
View all posts by jadefrost →
This entry was posted in NHK, Summer 2018 Drama Specials and tagged Hashizume Isao, Tanihara Shosuke, Tokiwa Takako, Yuunagi no Machi Sakura no Kuni. Bookmark the permalink.