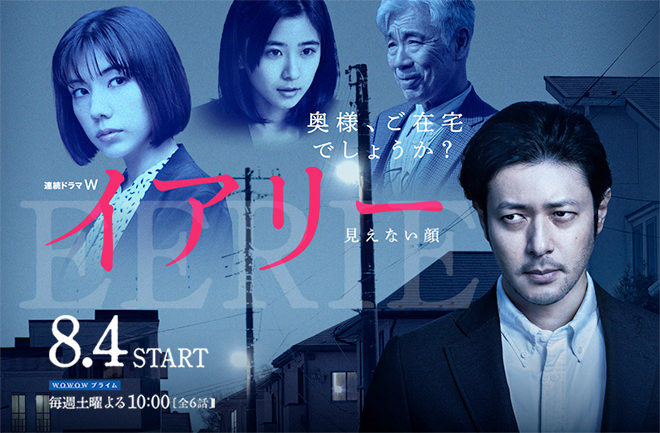 Story
Peculiar incidents happen around Professor Hirokawa Seiji of Ousei University after his wife dies of illness. An unknown woman visits their house and asks if his wife is at home. When he opens the front door, no one is there. Then the president of Ousei University dies all of a sudden. A new style of elections which is open to students too. Hirokawa’s colleague, Professor Ishida Ryuji, takes the lead in drawing voters, while the other professors become paranoid of each other and anonymous documents containing defamatory statements fly about. A disquieting mood begins to hang in the air. Hirokawa has been involved with his wife’s younger sister Mizushima Rei, who is a popular lecturer in the same university, since his wife was alive. They were together at the moment she died. His guilty conscience starts to stir up a vague sense of uneasiness towards the neighbourhood and the elections. Before long, the body of a person who died a bizarre death is found nearby. Hirokawa unknowingly sets foot in the dark desires of too dangerous people. A nurse Rokudo Nanami who is crazy about a host called Hoshiya, a capable lawyer Tsuchida Ritsuko and a suspicious resident Tanokura Kumiko … …

Characters
Odagiri Joe as Hirokawa Seiji
A professor of Ousei University. He teaches history. He was once addicted to alcohol. Although he has a sickly wife Hisae, he ended up in a relationship with her younger sister Rie. He does not want to get involved in bothersome matters such as the power struggle within the university.

Naka Riisa as Mizushima Rei
A lecturer at Ousei University. Her classes are highly rated and she is also popular among students. She is precious to her mother but feels restrained and at the point when she felt driven into a corner, she met someone who made a big difference in her life.

Tsukifune Sarara as Hirokawa Hisae
Hirokawa Seiji’s gentle wife and older sister of Mizushima Rei. She has had a weak constitution for a long time. Hirokawa moved to Ikoi Town because of her.

Kuroshima Yuina as Rokudo Nanami
A nurse who cannot turn people down when they ask for help and is always unable to stick to her will. She is completely absorbed in a host, and although she is badly off, there is no one she can turn to.

Makoto Tsubasa as Tsuchida Ritsuko
A lawyer with a strong sense of justice. She takes care of Rokudo Nanami and many other people as a lawyer, but she actually has another big motive.

Nekoze Tsubaki as Tanokura Kumiko
A housewife who manages Ikoi Town. She loves gossip and is a meddlesome person. She rummages through the rubbish dump and constantly monitors the movements of residents

Kakei Toshio as Ishida Ryuji
A professor of Ousei University. Hirokawa Seiji’s colleague. He harbours the ambition to become the university present some day and is in the lead in drawing voters.

Issey Ogata as Butsukami Kenjiro
A professor of Ousei University. He has worked at the university for a long time but has no big achievements. He has a mild nature and lives quietly to avoid getting involved in trouble. He is Hirokawa Seiji’s confidant.

This blog contains information and musings on current and upcoming Japanese dramas but is not intended to be comprehensive.
View all posts by jadefrost →
This entry was posted in Summer 2018 Dramas, WOWOW and tagged Eerie Mienai Kao, Naka Riisa, Odagiri Joe. Bookmark the permalink.