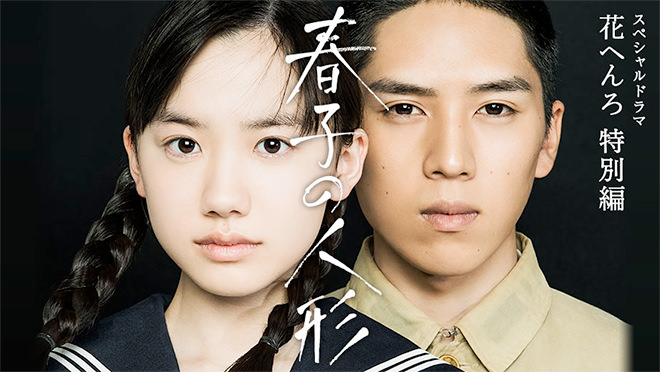 Date: From 9.00 p.m., 4 August 2018
Scriptwriter: Tomikawa Motofumi
Original Work: Haruko no Ningyo by Hayasaka Akira
Cast: Bando Ryota, Ashida Mana, Omi Toshinori, Nishimura Kazuhiko, Nakanishi Miho, Yamamoto Kei, Tanaka Yuko
Synopsis: In the early days of the Showa era in Matsuyama, Ehime Prefecture a newborn baby is abandoned with a doll under the eaves of a merchant house along the pilgrimage route in Shikoku. It seems to be a pilgrim struggling to make a living. This baby girl is named Haruko and brought by Tomita Shizuko (Tanaka Yuko) and Katsuji (Omi Toshinori) as the younger sister of their son Ryosuke who is three years apart. When the war begins, 16-year old Ryosuke (Bando Ryota) qualifies for the naval academy and crosses the Seto Inland Sea. After some consideration, Shizuko tells Haruko the truth that they are not real siblings for the first time. Haruko who has had a secret crush on her brother ever since he said that he would protect her, is innocently overjoyed and heads to Hiroshima to convey this to him. The next day, an atomic bomb explodes in the sky … … After Japan’s defeat in the war, Ryosuke is forced to return home. He cannot believe that Haruko is dead and feels tormented by a sense of loss. As he wastes his life away, he meets Amamoto Ichiko (Nakanishi Miho) who is a member of a travelling troupe and is attracted to her. However, it is his younger sister Haruko that he sees. Ryosuke eventually comes to a decision.
Official Website: www.nhk.or.jp/dsp/hanahenrosp

This blog contains information and musings on current and upcoming Japanese dramas but is not intended to be comprehensive.
View all posts by jadefrost →
This entry was posted in NHK, Summer 2018 Drama Specials and tagged Ashida Mana, Haruko no Ningyo, Tanaka Yuko. Bookmark the permalink.