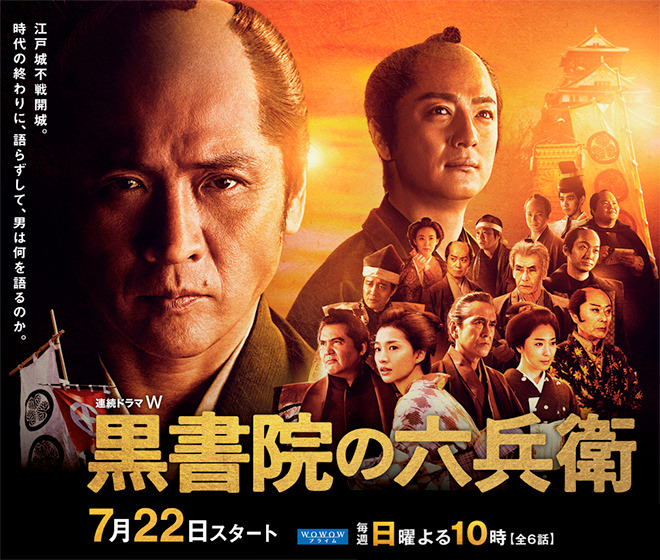 Story
In 1868, negotiations between the shogunate and the new government results in the decision to surrender Edo Castle. As the advance party dispatched to ensure that the surrender of the castle progresses without a hitch, Kakurai Hayato, a timid, low-ranking warrior of Owari who is on the side of the government forces, enters to inspect the castle. However, there is just one problem. There is a retainer of the shogun who refuses to budge. His name is Matooya Rokubei. He was a member of the guards under the direct control of the shogun. Rokubei silently sits on his heels and moves only to relieve himself. Kakurai is given the responsibility to remove Rokubei. However, disputes within the castle are strictly forbidden because of an agreement between Saigo Takamori and Katsu Kaishu. So Rokubei cannot be evicted by force. Kakurai probes into his intention for remaining in the castle, only to learn that this Rokubei is impersonating the real Rokubei and gets increasingly confused. However, Kakurai begins to feel a perplexing empathy for Rokubei who stands with traditional dignity, after spending some time with him. What is Rokubei’s true identity and motive?

Characters
Kikkawa Koji as Matooya Rokubei
A member of the guards under the direct control of the shogun. He does not utter a word and sits without moving. His dignified air overwhelms. Kakurai Hayato and others.

Kamiji Yusuke as Kakurai Hayato
A timid warrior of the Owari domain. He receives the role of in order to ensure that the surrender of the castle by the shogunate progresses without a hitch.

Terajima Susumu as Katsu Kaishu
The leader of the shogunate’s forces. He negotiates the peaceful surrender of Edo Castle with Saigo Takamori.

Chiba Tetsuya as Tokugawa Yoshikatsu
The fourteenth head of the Owari Tokugawa clan. Kakurai Hayato’s lord. He sides with the new government’s forces in the Boshin War, earning the wrath of the people on the side of the shogunate.

Oshinari Shugo as Tokugawa Yoshinobu
The fifteenth shogun. He leaves Edo Castle and is placed under house arrest.

Maeda Aki as Tenshoin (Atsuhime)
Tokugawa Yoshinobu’s wife. She does her best to protect the Tokugawa family which she married into.

This blog contains information and musings on current and upcoming Japanese dramas but is not intended to be comprehensive.
View all posts by jadefrost →
This entry was posted in Summer 2018 Dramas, WOWOW and tagged Ibu Masato, Kikkawa Koji, Kuroshoin no Rokubei, Terajima Susumu, Wakamura Mayumi. Bookmark the permalink.