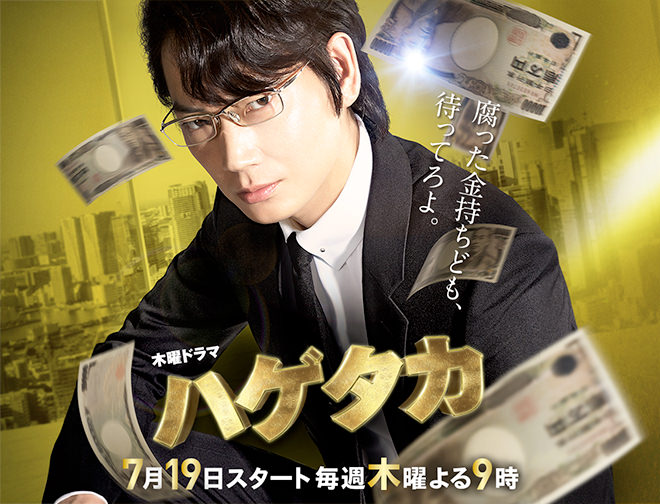 Story
It is the year 1997. Japan’s financial industry is plunged into a crisis after the bubble economy bursts. Its banks are saddled with massive bad debt and driven to the brink of survival. One of the major commercial banks, Mitsuba Bank, conducts a “bulk sale” of the non-performing loans which will be difficult to recover, to an investment firm. Shibano Takeo, the head of Mitsuba Bank’s Office for Asset Liquidation, is responsible for this first experiment in Japan. He meets Washizu Masahiko, the managing director of a foreign investment fund Horizon Japan Partners, who has emerged overnight in Japan. Given the total book value of 72.3 billion yen, Shibano requests a minimum offer of 30 billion yen. But Washizu merely responds that he will make a thorough assessment. Shibano experiences a touch of anxiety at his attitude. Everyone at Mitsuba Bank excluding Shibano responds unexpectedly well to the assessment. However, on the day of the reply deadline four weeks later, they are presented with a shocking assessed value by Washizu. Outraged that they have been taken in by a foreign “vulture”, Iijima Ryosuke, the managing director of Mitsuba Bank, announces that he will personally handle the second bulk sale. Meanwhile, debtors shout angrily at Washizu who has gained possession of them through the bulk sale. Matsudaira Takako, the front manager of Tokyo Crown Century Hotel, comes upon this scene. Although Washizu takes a bashing for making huge profits from buying out big banks with non-performing loans and well-known corporations in financial difficulty, he takes swipes at the senior management of companies which have become corrupt and gives these companies a new lease of life.

Characters
Ayano Go as Washizu Masahiko
The managing director of the foreign investment fund Horizon Japan Partners. While studying abroad in New York, he caught the attention of the prominent founder of a US buyout fund and set foot in the world of “vulture” business. He delivered results in a string of corporate takeovers and settlement of bad debts at a young age and was called “golden eagle” with awe. In 1997, he returns to Japan and sets up Horizon Japan Partners. Although he gets a bashing in Japan for taking over companies, he boldly buys out major banks and leading Japanese companies and makes huge profits. His real motive is … …

Watabe Atsuro as Shibano Takeo
The head of Mitsuba Bank’s Office for Asset Liquidation. He is appointed to take charge of the first “bulk sale” of massive non-performing loans in Japan. He meets Washizu Masahiko for the first time at negotiations for the bulk sale. While the bankers drop their guard in response to the gentle-mannered Washizu, he is the one only who is wary. He is married to Ayako and they have a daughter Azusa. But he is so busy that he practically neglects his family and eventually has to pay a big price … …

Sawajiri Erika as Matsudaira Takako
The eldest daughter of the owner of Nikko Miyabi Hotel, a long-established hotel in Nikko. She did not take over the family business and now serves as the front manager at Tokyo Crown Century Hotel. A young and astute woman, she has earned her spurs and been sounded out about a promotion to the board.

Ikeuchi Hiroyuki as Aaron Fujita
An employee of Horizon Japan Partners. Washizu Masahiko’s subordinate. He comes from a big investment bank. Although he is a Japanese American who was born in the US, he is fluent in Japanese. He is also knowledgeable about business etiquette and exercises his abilities as Washizu’s right-hand man.

Sugimoto Tetta as Saeki Munenori
An employee of Horizon Japan Partners. He has a thorough knowledge of the ins and outs of Japan’s political circles, and has many sources of information. He supports Washizu Masahiko’s corporate acquisitions from behind the scenes with big data.

Mitsuishi Ken as Nakanobe Goro
An employee of Horizon Japan Partners. An expert in real estate transactions, he knows all about Japan’s real estate sector, and naturally big projects in Tokyo.

Kobayashi Kaoru as Iijima Ryosuke
The managing director of Mitsuba Bank. His philosophy is that he is willing do anything for the sake of the bank and he imposes this on Shibano Takeo and other subordinates. He is a schemer who is reputed to be “Mitsuba’s tactician of all time”. While he cosies up to persons of influence, he is a man who shows no mercy to those who oppose him.