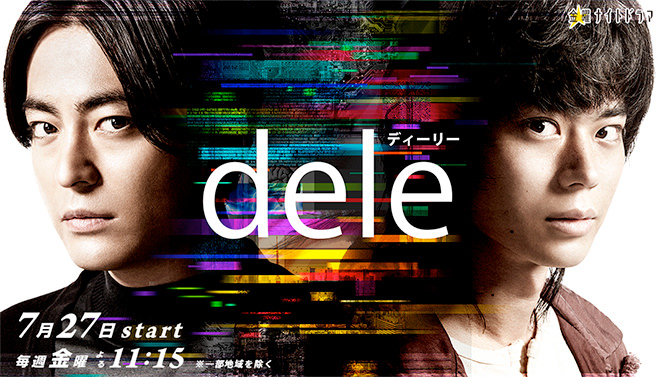 Story
Lawyer Sakagami Mai takes an interest in Mashiba Yutaro, a jack-of-all-trades who appears in court as a defendant. She quickly arranges for his release on bail and introduces work to him. Her younger brother Sakagami Keishi set up a company called dele.LIFE and has been working solo. His work is to delete all unfavourable digital records left in the computers and smartphones of his clients in secret after they die. Keishi’s computer terminal detects a signal. The device of a client Yasuoka Haruo, who is a gossip writer, is no longer operating. Yutaro heads over to confirm his death and discovers Yasuoka who appears to have committed suicide. Keishi immediately tries to delete his digital records. However, Yutaro learns that Yasuoka had made a promise to his son Shun, and argues that he could have been murdered. He suggests that they try to find evidence by checking the contents of the digital records. They soon determine from information in a schedule app that Yasuoka had met frequently with a person called Katayama Kaoru from Jonan Police Precinct. Yutaro visits Kaoru’s apartment in order to ask her. However, he is attacked by a mysterious man who comes out all of a sudden. Meanwhile, Keishi discovers a hidden folder containing “unspeakable facts” among the digital records.

Characters
Yamada Takayuki as Sakagami Keishi
A freelance programmer with a healthy appetite for learning. He became paralysed in the lower half of his body because of an unknown and serious illness and is confined to a wheelchair. He set up a company called dele.LIFE in partnership with the law firm established by his late father, and deletes digital data left in computers and smartphones of clients in secret after they die. He is stubborn, very proud and extremely territorial.

Suda Masaki as Mashiba Yutaro
A freelance jack-of-all-trades who ends up helping out Sakagami Keishi’s work in an unexpected turn of events. He carries out support work on behalf of Keishi who cannot leave the office, with a focus on tasks such as confirming deaths. He is frank and affable, and liked by everyone. But he dislikes being asked personal matters. This hides an inconceivable past.

Aso Kumiko as Sakagami Mai
Sakagami Keishi’s older sister. A competent lawyer who has now taken over the law firm that their late father established. She is the credit guarantor for Keishi’s company called dele.LIFE and occasionally provides financial support and introduces clients. She is a candid person who wants to teach her brother whom she thinks is a child mired in extreme logic that there is a wider world out there.

This blog contains information and musings on current and upcoming Japanese dramas but is not intended to be comprehensive.
View all posts by jadefrost →
This entry was posted in Summer 2018 Dramas, TV Asahi and tagged Aso Kumiko, Dele, Suda Masaki, Yamada Takayuki. Bookmark the permalink.