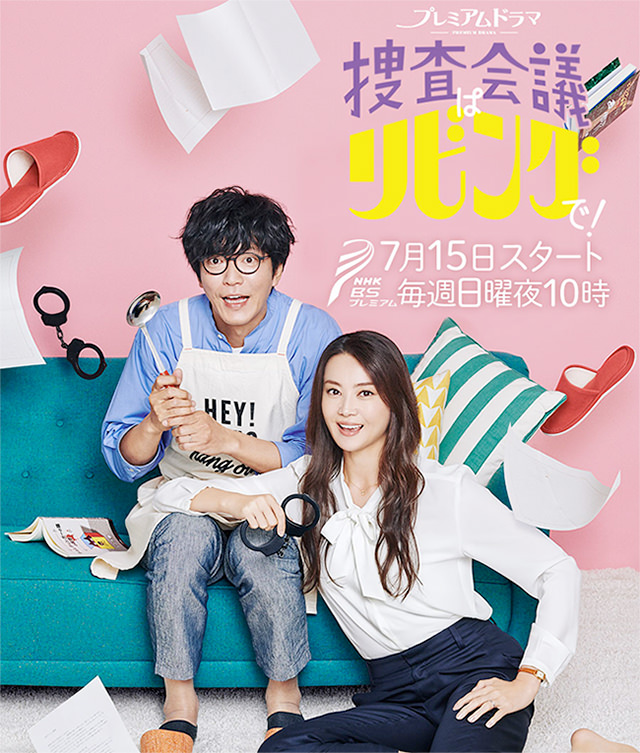 Story
Morikawa Shoko is a detective with the Criminal Investigations Department’s Special Unit but disguises herself as an employee who works for a trading company. Once there is a case, she will rush headlong against bad people. But at home, she finds housework bothersome and is hopeless at it. Shoko’s husband Akira is a mystery writer. He is exceptionally smart, genial and sensitive. Born to a sporty family which ironically has served the police generation after generation, Akira went against the wishes of his parents to be a writer. However, his novels are too tedious and quite unpopular while his blog on household matters which he writes without any particular reason is a big hit. So he finds himself in the extremely complicated situation of a “charismatic house husband”. This odd couple solves various cases and mysteries with brain and brawn. Add their son Nao to the mix and information and deductions constantly fly about their living room.

Characters
Mizuki Arisa as Morikawa Shoko
A detective who belongs to the Special Unit of the Chiba Prefectural Police’s Criminal Investigations Department. She has a strong sense of justice and became a police officer to make the best of her tremendous energy. She acts on intuition, but is not good at logical thinking. She finds housework bothersome and is hopeless at it. She has a black belt in judo. Her teacher is Morikawa Masatomo, Akira’s father, who was her boss when she was in the police precinct. To keep other people from learning about her work, she lies that she works for a trading company nearby.

Tanabe Seiichi as Morikawa Akira
Morikawa Shoko’s husband. Although he was born to a sporty family which ironically has served the police for three generations, he is neither the athletic or sporty sort. This made him determined to become a mystery writer. However, his novels are not popular with the masses. His blog on household matters which he writes without any particular reason is a big hit, and he is now called the “charismatic house husband”. Because he uses the pen name Irie Kuran, no one in the neighbourhood knows that he is a writer.

Katagiri Jin as Tani Yuma
He works for Utsugi Publishing and is the editor in charge of Morikawa Akira. But he cannot understand the meaning of Akira’s books even after he reads them. He wonders how these books should be sold and keeps bringing work work related to Akira’s blog on household matters which is doing well. He is the type who follows the crowd.

Ihara Shogo as Morikawa Nao
The son of Morikawa Akira and Shoko. An elementary school student in the fourth grade. He inherited the best things from his parents. He is quite philosophical about life at the age of 9 because he has seen his parents who are two extremes.

Takahashi Hideki as Morikawa Masatomo
Morikawa Akira’s father. A non-career police officer who worked his way up to become the head of a police precinct, but is now retired. He is a master of judo and one of his disciples is Shoko. He currently manages a judo school as an instructor. He does not get along with his son and hopes that his grandson Nao will become a police officer.

This blog contains information and musings on current and upcoming Japanese dramas but is not intended to be comprehensive.
View all posts by jadefrost →
This entry was posted in NHK, Summer 2018 Dramas and tagged Mizuki Arisa, Sousa Kaigi wa Living de!, Tanabe Seiichi. Bookmark the permalink.