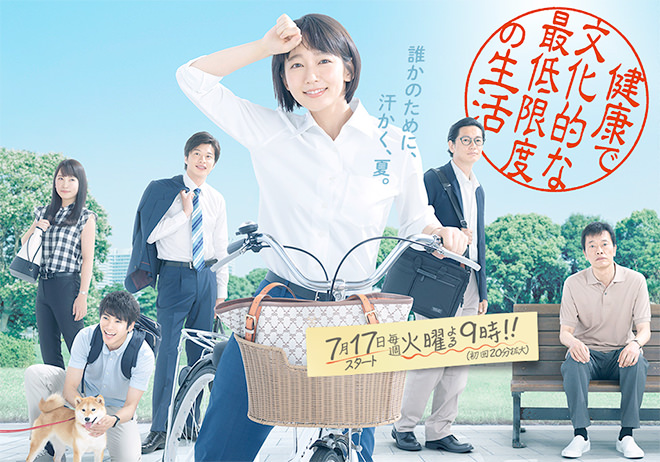 Story
22-year-old Yoshitsune Emiru once aspired to be a movie director but suffered a setback. Seeking an ordinary, stable life, she becomes a civil servant right after graduation. Her relief that she is set for life is short-lived. Together with four colleagues who joined at the same time including Kurihashi China and Shichijo Ryuichi, she is assigned to the extremely busy Welfare Division. Her job involves working and supporting people with financial difficulties, through public subsidies, as a caseworker. Handa Akinobu, a senior caseworker, immediately puts Emiru in charge of 110 households! Lacking knowledge of welfare services and life experience, Emiru begins her career as a caseworker feeling a great deal of anxiety and confusion as she comes in contact with all sorts of people on welfare. One day, Emiru receives a phone call from the ward office which will have a significant influence on her destiny. The caller who is one of the people she is in charge of, only says “I’m going to die” all of a sudden and then hangs up the phone. Emiru panics. Her predecessor and the person’s kin brush this off as the same old story and do not take this seriously. However, this develops into an incident that is too shocking for Emiru who is a rookie. Hit by harsh reality not long after being assigned to the division, Emiru decides that she has to be there for people on welfare in her own way. Some time later, Emiru has a session with Akusawa Masao, a welfare recipient who is looking for a job. Akusawa has no health problems but cannot stop coughing. When she asks, he tells her that he only has one meal a day. Emiru’s boss Kyogoku Daiki receives her report and suspects that Akusawa has some secret uses for his money. He instructs her to visit Akusawa’s house and conduct a thorough investigation. Emiru goes to Akusawa’s house. She is shown his refrigerator and discovers something inside … …

Characters
Yoshioka Riho as Yoshitsune Emiru
An ordinary girl who seeks stability and becomes a civil servant after facing a setback in her dream to be a movie director. She is compassionate and straightforward. Although she is very bewildered by the situation that she has plunged into all of a sudden, an incident shortly after she is assigned to the Welfare Division, makes her firmly resolve to be there for the welfare recipients in front of her and she runs around in her own way. At some point, this starts to become their salvation.

Iura Arata as Handa Akinobu
A senior caseworker who has many years of experience in the front line. A professional whom anyone at work can count on, he stays by welfare recipients, finds out their problems and discovers the way. He always has a gentle, mild demeanour and an encompassing air. However, he also has an elusive and rather “mysterious” side.

Tanaka Kei as Kyogoku Daiki
Yoshitsune Emiru’s superior who is strict with money and gives pep talks about “being employed” and “thorough investigations”. Because he is a realist who seeks based on the law and systems, he stands in the way of Emiru who empathises with welfare recipients and charges into situations. His approach is the opposite of Handa Akinobu’s and he teaches her how demanding the job can be.

Endo Kenichi as Akusawa Masao
The first welfare recipient whom Yoshitsune Emiru gets deeply involved with. Although he always coughs, he has a clean bill of help and only eats one meal a day for some reason. He is a methodical person, but also has a mischievous side. A middle-aged man of many mysteries. Emiru gets to know about the secret which he has hidden from the ward office.

This blog contains information and musings on current and upcoming Japanese dramas but is not intended to be comprehensive.
View all posts by jadefrost →
This entry was posted in Fuji TV, Summer 2018 Dramas and tagged Endo Kenichi, Iura Arata, Kenkou de Bunkatekina Saitei Gendo no Seikatsu, Tanaka Kei, Yoshioka Riho. Bookmark the permalink.