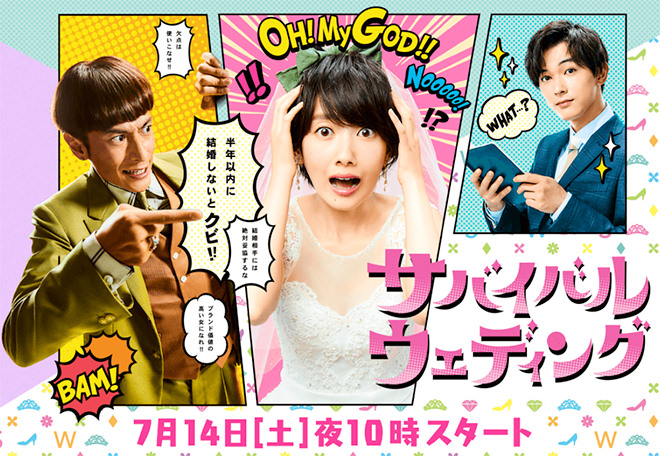 Story
29-year-old Kuroki Sayaka works for the editorial department of a men’s magazine, Shukan Edge, at a publishing company. She is going to get married to her dear fiance Ishibashi Kazuya on her 30th birthday three months later. However, on the night that Sayaka happily resigns from her company, she discovers that Kazuya has been cheating on her! To add insult to injury, he lashes out at her even though he is in the wrong. Their engagement is called off!!! Her wedding has come to naught, and she has also quit her job. But Sayaka is in a fix over the expenses accumulated for the wedding preparations. Swallowing her pride, she approaches her former boss with the request to return to work. She is introduced to editorial department of the women’s lifestyle magazine, riz, which is a completely different field for her. Usami Hiroto, the charismatic editor of riz, is a sharp person but a narcissistic eccentric who makes scathing remarks. He gives Sayaka these unprecedented terms for reemployment: 1) get married within six months, 2) work towards marriage the way he tells her to and write about her search for a husband. Usami claims to be the most informed person in Japan about romance, and orders Sayaka to “raise her own worth”. Sayaka sets out to reconcile with Kazuya and get married. At the direction of Usami who draws on the marketing strategies of famous brands for almost everything, Sayaka ignores Kazuya’s phone calls. She waits impatiently for the day she can communicate with him as she gets overworked by everyone in the editorial department. Will Sayaka be able to apply these brand marketing strategies of international brands as romance techniques to raise her value as a woman and successfully get married in six months?

Characters
Haru as Kuroki Sayaka
She is in charge of the men’s magazine Shukan Edge’s section introducing traditional Japanese pub food to salarymen. She met Ishibashi Kazuya, the senior whom she idolised during high school days, in Tokyo and they have been dating for four years. They are going to get married on her 30th birthday but something happens on the day that she resigns from the company. She is a gutsy person who will brave anything. Because she is cheerful and hardworking, she appeals to old men. But she has an awkwardness which makes it impossible for her to behave in a way that will make her popular. She was brought up by her mother.

Yoshizawa Ryo as Kashiwagi Yuichi
A handsome employee of an advertising agency. He meets Kuroki Sayaka because of an advertising project collaboration between their companies. He is a dependable hard worker. While he is good at his work, he is rather obtuse when it comes to advances from females. He is obstinate and once he decides on something, he will charge ahead. He has his own dreams.

Takahashi Maryjun as Miura Takako
A stylish editor of riz who joined the company at the same time as Kuroki Sayaka. She can hold her liquor well, and is good at her job. Although she appears strong-willed and intimidating, she is actually the soft-hearted type. She has a secret that she cannot tell anyone.

Buruzon Chiemi as Okuzono Chieri
An employee of the editorial department who is in charge of riz‘s social media networks. Her age is not known and she appears in unexpected places at unexpected moments. Whenever she sees an interesting subject, she will take a photo immediately and upload it. She is going after the cute part-timer Takahashi Ryota.

Kazama Shunsuke as Ishibashi Kazuya
Kuroki Sayaka’s fiance who works for a trading company. He is her first love. In high school, he was good in his studies and was the ace of the soccer team. However, he has cold feet marrying Sayaka.

Iseya Yusuke as Usami Hiroto
The charismatic chief editor of riz. A bachelor. He has edited a number of major magazines and also has overseas editorial experience. He revamped riz from a poor-performing arty, fashion magazine, into a lifestyle magazine and turned its sales around dramatically. He is an extreme narcissist and has unique fashion sense. Although he is stylish and handsome, he is fastidious, stubborn and harsh with his remarks. He cannot drink a drop of alcohol and is a terrible driver.

This blog contains information and musings on current and upcoming Japanese dramas but is not intended to be comprehensive.
View all posts by jadefrost →
This entry was posted in NTV, Summer 2018 Dramas and tagged Haru, Iseya Yusuke, Survival Wedding. Bookmark the permalink.