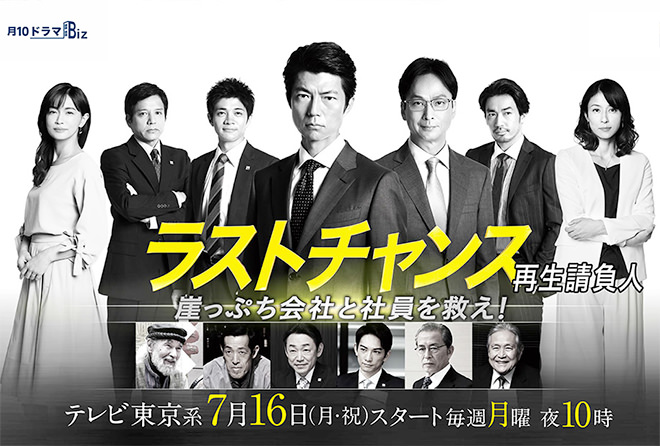 Story
Kashimura Tetsuo has worked at the investment department of Chitose Bank, a major bank in Tokyo, for many years. Life is smooth sailing until it is announced that Chitose Bank will be taken over by Ryoko Bank which is affiliated with a conglomerate. Many colleagues resign and even Miyauchi Ryo, who joined the bank at the same time as Kashimura did, eventually leaves. Several days later, Kashimura is ordered on a secondment to a subsidiary, which is effectively a demotion for him. Kashimura is uncertain about the path he should take. At this point, a fortune teller predicts “You will have a flavourful life like one seasoned with seven spices.” Kashimura decides to resign from the bank. While he is searching for a job, he is recruited by Yamamoto Tomoya, the CEO of an investment fund and an old acquaintance of his, to take the CFO role at Delicious Food, a restaurant franchise company, and turn around the business.

Nakamura Toru as Kashimura Tetsuo
He has delivered results in Chitose Bank’s investment arm and life as a banker has been roses. However, things completely change following the announcement of the bank’s merger with Ryoko Bank. He loses sight of where he is heading in life and is recruited to turnaround Delicious Food, a largest restaurant franchise business, but … …

Kippei Shiina as Miyauchi Ryo
A graduate of Tokyo University who entered Chitose Bank at the same time as Kashimura Tetsuo. After the bank’s merger with Ryoko Bank is decided, he is chosen to be a member of the task force preparing for the merger. However, he is unhappy with the way things have developed and sets up a management consulting firm to strike out on his own.

Otani Ryohei as Yamamoto Tomoya
The CEO of the investment fund, Global Revival Foods. He worked with Kashimura Tetsuo during his banking days. As the largest shareholder of Delicious Food, he asks Kashimura to become its CFO and fights to prevent its share price from dropping.

Katsumura Masanobu as Kishino Satoshi
The head of Delicious Food’s finance department and one of the founders of the company. He loves the company and has misgivings about Kashimura Tetsuo who comes from a different field.

Wada Masato as Saiki Ryuichi
A member of Delicious Food’s finance department. Although many employees oppose Kashimura Tetsuo who shows up all of a sudden, he welcomes him with his straightforward personality. He is passionate about the company and strives to build up its brand.

Mizuno Miki as Okada Towako
The CEO of Towako Food, a restaurant business. She is beautiful, dignified and capable. She has convictions and love for her company. To Kashimura Tetsuo, she is a good advisor on company management.

Hasegawa Kyoko as Kashimura Akiko
Kashimura Tetsuo’s wife. They were co-workers before they got married and now have two children. She supports Kashimura who has lost sight of where he is headed due to his bank’s merger. She is a dependable person when it comes to the crunch.