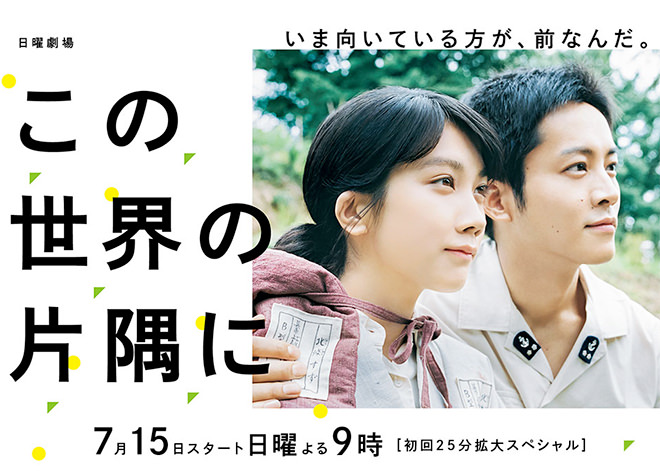 Story
One day in 1934, a young Urano Suzu who lives in the Eba district of Hiroshima City in Hiroshima Prefecture, is drawing by the riverside while on her way home from running an errand. She gets caught by a kidnapper. However, she succeeds in escaping due to the quick wits of a young boy Shusaku who was caught earlier. Suzu gets home safely but the events of this day seem like a dream to her … … Time passes. In the autumn of 1943, Suzu is helping out at the home of her grandmother Ito together with her younger sister Sumi, when her aunt rushes in. She received news that someone has come to Suzu’s house in Eba to ask for her hand in marriage. A confused Suzu hurries back home. Along the way, she meets her childhood friend Mizuhara Tetsu who has gone on to the naval academy. She thinks that Tetsu must be the person. At that moment, Hojo Shusaku and his father Entaro are waiting at the Urano residence for Suzu to come back home. Shusaku says he has met Suzu before, but she has no recollection of it. She has a hard time imagining herself as a wife, but before it all sinks in, her father Juro and mother Kiseno accept the proposal and begin preparations. Suzu’s grandmother gives her a beautiful kimono to take with her to her new home. She marries Hojo Shusaku and moves to Kure City in the middle of the Pacific War. As Japan slides into a war it cannot get out of, the townspeople go on with their “ordinary” lives. Supplies are short, and family and friends get sent to the battlefield, casting a dark cloud over war-time Hiroshima. Suzu and the Hojo family battle such anxieties as they try to live each day with positivity.

Characters
Matsumoto Honoka/Arai Miu as Urano Suzu
She grew up in the Eba district of Hiroshima city and married the Hojo family of Kure City. She is good at drawing. She is carefree but is full of concern for other people. Despite the dark clouds of war looming over the country, she tries to be positive and cheerful.

Matsuzaka Tori as Hojo Shusaku
Urano Suzu’s husband. He is quiet and seems highly strung, but has a compassionate and kind heart. He does military court registrations in the navy.

Nikaido Fumi as
A prostitute of Kure City’s Asahi red light district. She happens to meet Urano Suzu through an unexpected turn of events, and they strike up a strange friendship.

Ono Machiko as Kuromura Keiko
Urano Suzu’s sister-in-law. Hojo Shusaku’s sister. Hers was a love marriage which was rare for those times. However, she took her daughter from her husband’s place and moved back with her parents because of some situation. She has a forceful tone and is a little pushy.

Ito Ran as Hojo San
Urano Suzu’s mother-in-law. Hojo Shusaku’s mother. She has a limp in her left and often stays in bed. She helps out in household chores to the extent that she can.

Miyamoto Nobuko as Morita Ito
Urano Suzu’s grandmother. No one understands Suzu’s kindness better than her, and she secretly continues to watch over her.

This blog contains information and musings on current and upcoming Japanese dramas but is not intended to be comprehensive.
View all posts by jadefrost →
This entry was posted in Summer 2018 Dramas, TBS/MBS and tagged Eikura Nana, Kono Sekai no Katasumi ni, Nikaido Fumi, Okada Yoshikazu, Ono Machiko. Bookmark the permalink.