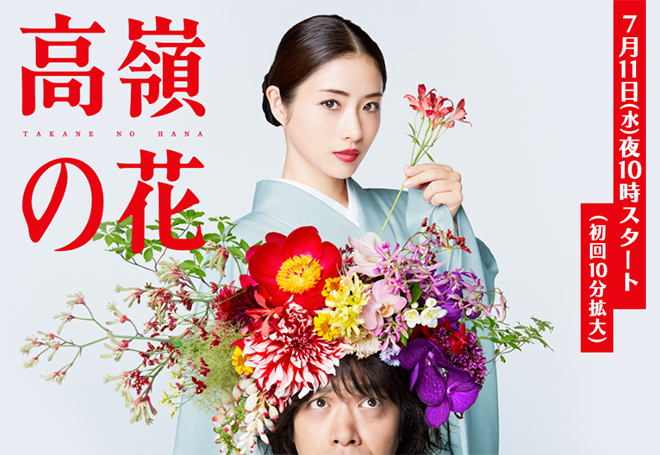 Story
The eldest daughter of the distinguished head family of the famous Tsukishima style of flower arrangement, 29-year-old Tsukishima Momo has everything – beauty, talent, career and wealth. She is engaged to Yoshiike Takuma, the man she deeply loves. However, she discovers her fiance has been two-timing her and cancels their marriage on the day of the wedding. This big blow shakes her confidence and she cannot recover from it. One day, the bicycle which Momo had been riding is smashed up. She strays into a bicycle shop in a small shopping street and asks its owner Kazama Naoto to repair it. Naoto is not irritated by Momo’s haughty, free-spirited attitude and cheerfully takes the bicycle into his care. At that moment, Naoto’s mother, whom he had been giving care to for a long time, passes away. The concerned people of the shopping street urge an arranged married. Naoto has never had a girlfriend. When Momo visits Naoto’s shop again, he is being introduced to a prospective marriage partner. Momo learns that he is called “Pooh-san” and loved by everyone in the shopping street because of his mysterious charm. She is initially bewildered by the people of the traditional working class neighbourhood who are completely different from the world she was born into. As the owner of a bicycle shop, Naoto is an ordinary man who has nothing, and Momo is a woman out of his league. In spite of this, the unthinkable happens – two of them fall in love.

Characters
Ishihara Satomi as Tsukishima Momo
The eldest daughter of the distinguished head family of the famous Tsukishima style of flower arrangement. She is beautiful, wealthy and talented like a flower on a high peak. However, she discovers that her fiance has been two-timing her. She breaks off their engagement on the day of the wedding ceremony and loses self-confidence.

Mineta Kazunobu as Kazama Naoto
The owner of a bicycle shop. His nickname is Pooh-san. His mother whom he had been nursing for more than 10 years has just passed away. He is very ordinary but has a kind and gentle nature.

Yoshine Kyoko as Tsukishima Nana
Tsukishima Momo’s step sister. She adores her exceptionally talented elder sister. She tries to support Momo who has been hurt by her engagement but she gets involved in the battle to succeed as the next head of the family.

Toda Naho as Tsukishima Ruriko
The second wife of Tsukishima Ichimatsu, the head of the family of the famous Tsukishima style of flower arrangement. Tsukishima Nana’s mother and Momo’s step mother. She pushes for her daughter to be the successor.

Kohinata Fumiyo as Tsukishima Ichimatsu
The father of Tsukishima Momo and Nana. The head of the family of the famous Tsukishima style of flower arrangement. He is in poor health and has started to consider his successor.

This blog contains information and musings on current and upcoming Japanese dramas but is not intended to be comprehensive.
View all posts by jadefrost →
This entry was posted in NTV, Summer 2018 Dramas and tagged Ishihara Satomi, Kohinata Fumiyo, Nojima Shinji, Takane no Hana. Bookmark the permalink.

1 Response to Takane no Hana