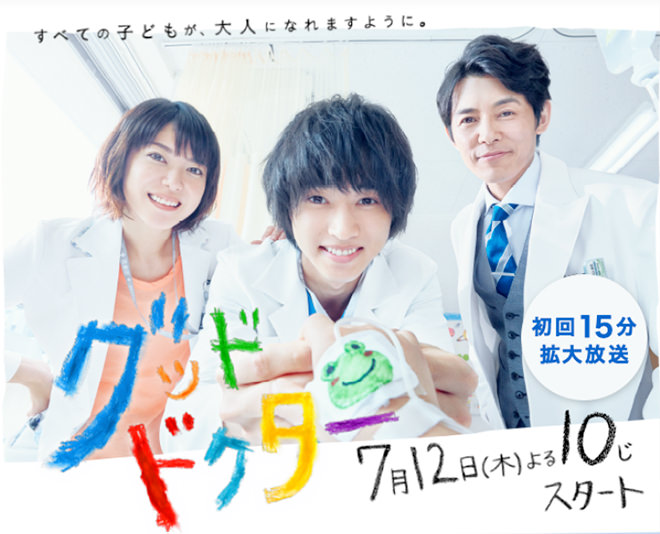 Story
On his first day of work, Shindo Minato clutches a carved wooden scalpel in his hand while he rides a bus. At that moment, a meeting is underway at Togo Memorial Hospital where pediatric surgeon Seto Natsumi works. Takayama Seiji, a senior pediatric surgeon, is also at this meeting. On the agenda are measures to reduce labour cost. Mamiya Keisuke, the head of the pediatric surgery department which has been singled out by chairwoman Togo Michi for its unprofitability, complains about the lack of manpower even under normal circumstances. Takayama rebuts that while loss-making pediatric wards are being reduced, their department is the last bastion for children. Hospital director Shiga Akira agrees with Takayama’s views and tells them that a new resident has been invited to join the pediatric surgery department today. Deputy hospital director Inoguchi Ryunosuke quietly listens to the opinions of both sides. This resident is Shindo Minato. He graduated at the top of the class in university, but Shiga indicates there is just one issue. Minato has autism spectrum disorder. Despite the objections of the doctors, Shiga thinks highly of his skills as a doctor. When Minato alights from the bus, an accident occurs. He sees a child collapse from injury. A passerby who is a doctor examines the child’s condition. However, Minato puts a stop to this and gives first aid. An ambulance arrives after the procedure. Minato wants to hurry to work but ends up accompanying the child. At Togo Memorial Hospital, Natsumi is told of the acceptance of a child by ER. Minato appears from the ambulance with the child who is on a stretcher. He takes the plunge into the world of medical care. Although he faces prejudice and opposition from the people around him, he is there for the children and grows up in the process.

Characters
Yamazaki Kento as Shindo Minato
The second of two brothers, he was born with autism spectrum disorder and savant syndrome but has an astounding memory. When he was a teenager, he wanted to become a pediatric surgeon with encouragement from his older brother who realised his gift and through his encounter with the town’s doctor Shiga Akira. He memorised everything in huge medical books and graduated at the top of the medical faculty and also passed the national exam for medical practitioners. He came to work as a resident at the pediatric surgery department at the invitation of Shiga who had become the director of a large hospital. Although he keeps causing trouble, his warmth begins to change child patients, siblings, parents and the hospital.

Ueno Juri as Seto Natsumi
A cheerful, determined pediatric surgeon with a strong sense of justice. She will not let her vulnerabilities be seen by people. She became a doctor because of her aspiration to be a pediatric surgeon from the beginning. She is willing to work hard and loved by child patients. At the same time, she does not have experience in difficult surgeries because she is still junior, and wants to become a full-fledged surgeon quickly. She somehow ends up taking care of Shindo Minato who has joined as a resident.

Fujiki Naohito as Takayama Seiji
The ace of the pediatric surgery department who leads the pediatric surgeons including Seto Natsumi. Everyone acknowledges his superior skills as a doctor which are one of the best in the country. In addition, he is a man of integrity and does not make his subordinates take all the responsibility no matter what happens. The popularity and trust he enjoys is unshakeable. However, he is tough on himself and other people. Because he scolds but does not praise people, he is feared by subordinates.

Totsugi Shigeyuki as Mamiya Keisuke
The head of the pediatric surgery department. Takayama Seiji’s surgery skills are superior to his and he has become a leader who is a figurehead. His priorities are career advancement and self-preservation. He is only concerned about internal politics. That is why he is unpopular with the people in the front line who also distrust him. He has to take Shindo Minato into the department all of a sudden, and he is troubled.

Nakamura Yuri as Togo Michi
The chairwoman of the board of directors. The daughter of the former chairman of the board of directors. She assumed this position upon her father’s death in order to turnaround the hospital’s loss-making operations. She is dating Takayama Seiji and is believes the hospital should do away with the unprofitable pediatric surgery department. However, she has second thoughts when she thinks of Takayama.

Itao Itsuji as Inoguchi Ryunosuke
The deputy director of the hospital. He is very outstanding and quick-witted. He is also modest. But there are times when it is not clear what he is actually thinking. People are awed by him. He conceals his feelings and the story is shaken up by some plan … …

Emoto Akira as Shiga Akira
The director of the hospital. A sincere, mild-mannered man who is like a father to Shindo Minato and mentor whom Takayama Seiji respects and loves. He moved to this hospital from his clinic at the invitation of the previous director and built up his career as a doctor. His focus on beneficial medical treatment for children rather than profits is criticised within the hospital.

This blog contains information and musings on current and upcoming Japanese dramas but is not intended to be comprehensive.
View all posts by jadefrost →
This entry was posted in Fuji TV, Summer 2018 Dramas and tagged Emoto Akira, Fujiki Naohito, Good Doctor, Hamano Kenta, Itao Itsuji, Ueno Juri, Yamazaki Kento. Bookmark the permalink.