Gibo to Musume no Blues 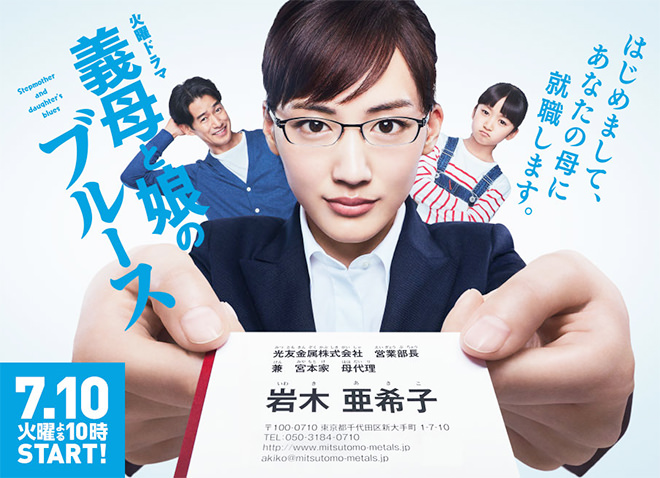 Story
Miyamoto Miyuki has lived with her father Ryoichi ever since her mother Ai passed away a few years ago. One day, a career woman appears in front of her. This woman’s name is Iwaki Akiko. She is the head of the Sales Department of Mitsutomo Metals, the company with the largest share in the industry, and Miyuki’s new step mother. This is the first meeting between Akiko and Miyuki. Akiko hands her name card to Miyuki with the greeting, “This is who I am.” But Miyuki curtly responds, “I hate this person.” Akiko leaves a mysterious envelope behind and goes back. Miyuki glares at her father for not telling her that Akiko would come. A flustered Ryoichi tries hard to reason with Miyuki but gets talked down. Akiko’s first battle as a step mother sadly ends in failure. However, Akiko is not done. She employs her business experience as she works out various ideas to win Miyuki’s heart. She reads a lot of books on child psychology and systematically conducts research on the people whom Miyuki knows. She even involves Taguchi Tomomasa, her junior at Mitsutomo Metals, to develop the best strategy. Meanwhile, Ryoichi is warned by the gossip-loving Shimoyama Kazuko of Shimoyama Real Estate that he might be remarrying too soon? But he talks about his feelings for Akiko. Akiko visits Kazuko in an attempt to get hints to breach Miyuki’s stronghold. However, Kazuko says, “I cannot be your ally. I’m Miyuki-chan’s.” Akiko works hard to gain Miyuki’s acceptance as Miyuki considers whether she should. They eventually become a family, experiencing life’s little moments of happiness, sadness, and laughter together.

Characters
Ayase Haruka as Iwaki Akiko
A career woman who works hard at Mitsutomo Metals and is even willing to come up with routines for drinking parties. She uses business language a lot in regular speech. She is a workaholic who thinks about work around the clock, does not have hobbies and know how to enjoy life.

Takenouchi Yutaka as Miyamoto Ryoichi
He works for the long-established Sakura Metal Industry. The father of a 8-year-old daughter Miyuki. He has a cheerful personality and is quick to find small miracles every day. He is unrivalled in his ability to soothe the people around him. Known by his nickname Miyamo-chan, he is the “sunshine of this company” and “soothing”, and popular with employees of all ages and gender. He does not care for small things and can be called an insensitive or broad-minded guy. Something spurs him to propose to Iwaki Akiko who is the head of the sales department of the rival company Mitsumoto Metals.

Sato Takeru as Mugita Akira
A good-for-nothing wanderer who cannot seem to set goals and settle down. He exerts great influence and harm on Akiko and Ryoichi’s family for a long time. But this is based on some underlying feelings … …

Yokomizo Naho as Miyamoto Miyuki
Miyamoto Ryoichi’s 8-year-old daughter who is in third grade in elementary school. She is not good in her studies, easygoing and cheerful. Her mother’s death greatly affected her. She behaves cheerful in front of her father but at school she shuns other people and gets made fun of by Hiroki whom she has known for some time.

Asano Kazuyuki as Kasahara Hirunoshin
Miyamoto Ryoichi’s boss who belongs to Sakura Metal Industry’s Sales Department. He sees rival company Mitsutomo Metals as an enemy and when its results go up, he will start to strike Ryoichi with a folding fan. He gets angry with the placid Ryoichi each time but worries and cares about him.

Aso Yumi as Shimoyama Kazuko
A gossip-loving older woman of Shimoyama Real Estate. She has her name on the list of family support in the community and she has been the one who looked after Miyuki at times until Iwaki Akiko came. She is loose-lipped, says a lot of offensive things and meddlesome. However, she is that sort of older woman that such places need to have. Akiko regards her as a valuable source of information and their friendship deepens.

Original Work
Gibo to Musume no Blues by Sakurazawa Rin

This blog contains information and musings on current and upcoming Japanese dramas but is not intended to be comprehensive.
View all posts by jadefrost →
This entry was posted in Summer 2018 Dramas, TBS/MBS and tagged Aso Yumi, Ayase Haruka, Gibo to Musume no Blues Series, Sato Takeru, Takenouchi Yutaka. Bookmark the permalink.

1 Response to Gibo to Musume no Blues