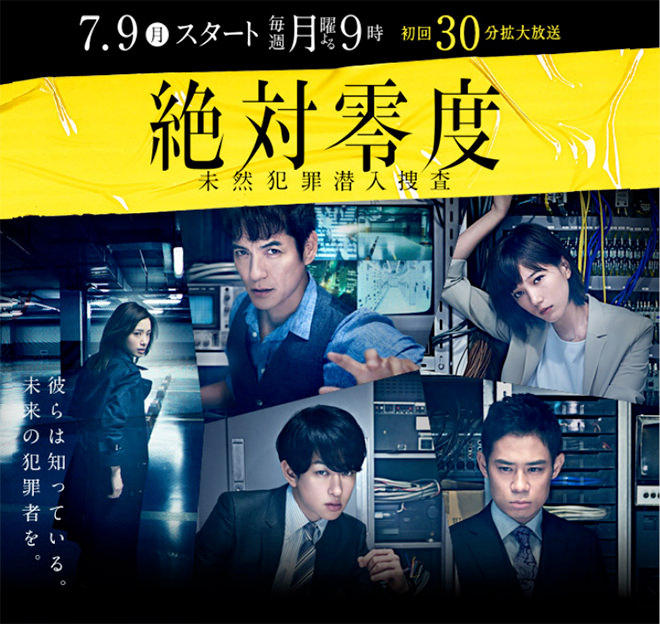 Story
Izawa Norito was an elite detective of the Public Security Department’s Second Division. He was ordered to transfer to the General Affairs Department’s Documentation Division due to some incident. The members of the division are all troublemakers within the police – Odagiri Yui got transferred because of excessive violence on a molest suspect; socially awkward Minami Hikotaro has been in this division since he joined the police; and Tamura Kaoru has been shuffled around to various departments. However, this Documentation Division has been tasked with an important project which is being conducted in secret and special investigator Todo Sadaharu from the Investigative Planning Division, plays a central role. This project, which goes by the name Mihan system, involves analysing big data such as the personal information on Japanese citizens – email and phone records, financial institutions’ deposit and withdrawal records – and surveillance camera footage nationwide. It is then compared with data on crimes that took place in the past 15 years which AI computes to find dangerous people with a high probability of committing grave offences, primarily murders before these happen. Meanwhile, Yamauchi Toru, who was a member of the Special Criminal Investigations Unit, has been pursuing the whereabouts of his partner Sakuragi Izumi on his own, even after the team was disbanded following her disappearance. But the investigation soon reaches a dead end. Feeling a sense of helplessness and distrust of the police organisation, he hits his superior and is ordered to transfer to the Documentation Division. While the Mihan system can identify possible murderers, it cannot tell when, who, how and why. Yamauchi has misgivings about this system which can result in false charges. He tells Izawa, “Even if something happens to any of you in investigations that cannot be made public, the police will not help. It’ll end with you being cut off.” As this takes place, the system determines test case #5 … …

Yokoyama Yu as Yamauchi Toru
Formerly from the Special Criminal Investigations Unit, his partner Sakuragi Izumi, who was his senior, suddenly went missing while on a classified mission. That triggered the demise of the unit. After that, he transferred to the First Investigative Division. However, he came into conflict with his boss because he distrusted the police organisation for trying to dodge an investigation into Izumi’s disappearance, and transferred to the Documentation Division. He has a sense of justice and is honest. Therefore, he gets hurt easily. He questions whether preventive investigation is illegal and will lead to false charges.

Honda Tsubasa as Odagiri Yui
Formerly from the Community Safety Division, she assaulted a runaway molester suspect more than necessary and was transferred to the Documentation Division. She is sadistic, exceptionally cold towards men and behaves boorish but this is due to her hidden past. To grow strong, she dabbled in martial arts and is quite strong in her own style of martial arts. However, she is actually pure and can empathise with the victims of crimes.

Hirata Mitsuru as Tamura Kaoru
He is not liked by the people around him due to his suspicious behaviour and habit of saying “excuse me, sorry”, and was passed around from department to department. He mastered the technique of picking locks from thieves whom he became friendly with and has forensic skills. He is useful to the Mihan team which has to do everything on their own.

Ito Atsushi as Todo Sadaharu
A career officer from the Tokyo Metropolitan Police Department who is on the fast track in the shortest time. He believes Japan must quickly bring in the Mihan system which can predict and solve crime as foreign countries including the US attempt to introduce big data and AI to prevent crime. His objective is to get this Mihan system officially recognised and legalised.

Ueto Aya as Sakuragi Izumi
She matured into a top investigator who solved all sorts of cases in the seven years since the Special Criminal Investigations Office was set up, and was Yamauchi Toru’s partner. However, she was given a classified mission one and a half years ago and suddenly went missing while on the case. She has not been contactable since then. Fearful of a public backlash, the Tokyo Metropolitan Police Department and declared her disappearance as an “inconvenient truth” and closed the case without a proper investigation. How is her disappearance connected to the Mihan team?

This blog contains information and musings on current and upcoming Japanese dramas but is not intended to be comprehensive.
View all posts by jadefrost →
This entry was posted in Fuji TV, Summer 2018 Dramas and tagged Hirata Mitsuru, Sawamura Ikki, Zettai Reido Series. Bookmark the permalink.