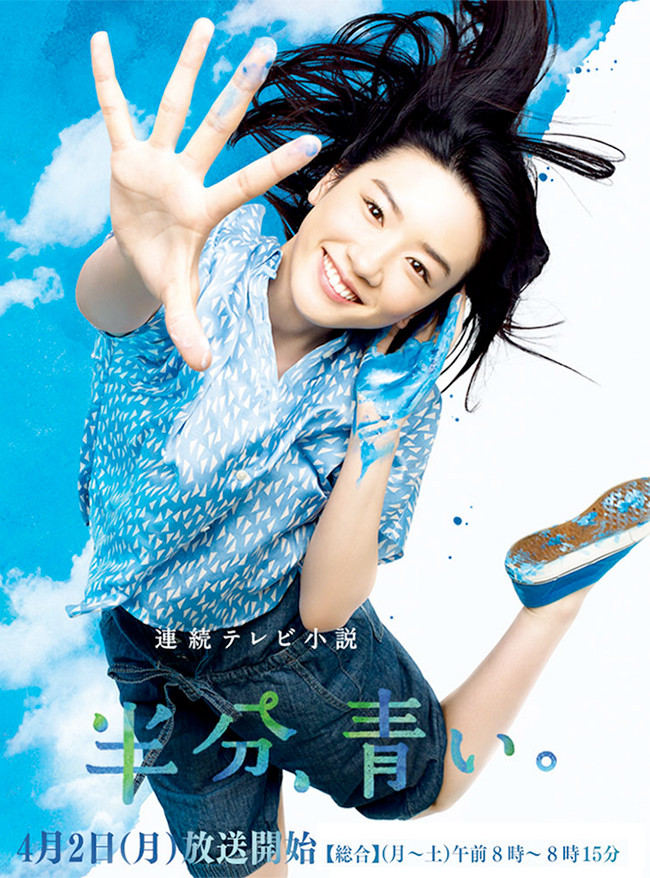 Story
In 1971, the year after the Osaka Exposition, a girl called Nireno Suzume was born to Nireno Haru and Utaro, the owners of a small eatery in a rural town in Gifu Prefecture, after a difficult labour. Her grandparents were overjoyed by the birth of their first grandchild. On that same day, a boy called Hagio Ritsu was born to Hagio Wako and Yaichi at the same hospital. Suzume was a healthy child who ran around the hills and fields every day. But when Suzume was in her third grade in elementary school, she ended up losing her hearing in her left ear because of an illness. Her loving parents and childhood friend Ritsu who has been by her side since they were born and grown to be a special person, were the ones who give her encouragement. After graduating from high school, Suzume sets her sights on writing manga for girls with her unique creative powers and leaves for Tokyo which is in the middle of the bubble economy. Put through training by her teacher Akikaze Haori, she tries hard to improve herself by learning from fellow assistants and devoting herself to studying but soon faces setbacks. Suzume gets married and has a daughter but the family finances are dire. She ends up divorcing her husband who is a dreamer. The bubble economy bursts before she realises it and enters a period of low growth. After repeated failure, Suzume returns to her hometown as a single mother. What awaits her will become an unexpected turning point in her life … …

Characters
Nagano Mei as Nireno Suzume
The eldest daughter of the Nireno family who live in a small town in eastern Gifu Prefecture. She grew up quickly surrounded by warm people and has bold flashes of inspiration that she must act on as soon as she thinks of it. Even if she does not succeed, she cheerfully lets it pass because she has done it. However, there are also times when she ends up causing an uproar that involves the people around her. When she was in her third year in elementary school, she lost her hearing in her left ear. She was amused that she could only hear the sound of rain with one ear and overcomes it with unique sensibility and positivity, seeing the blue sky after the rain as “half blue”. She is poor in her studies but good at drawing.

Sato Takeru as Hagio Ritsu
Nireno Suzume’s childhood friend who was born on the same day in the same hospital. They understand each other more than anyone else but they have been complete opposites since they were born – in looks and studies. Unlike Suzume who follows her heart, he is cool and theoretical but also has a gentler and more sensitive side. He has cared about Suzume for as long as he can remember and she came to depend on him. But he is energised by her big heart and also feels envious of her. A part of him thinks that only he can protect Suzume.

Matsuyuki Yasuko as Nireno Haru
Nireno Suzume’s mother. She runs an eatery and is one of the most beautiful proprietresses of the local shopping street. Because she is scary when she is angry, she tends to be seen as a gutsy mom but she is actually easily moved to tears and good-natured. She deeply loves her husband Utaro who is always positive. She is concerned about Suzume’s hearing and feels guilty that she caused her to lose her hearing in one ear. She worries about her daughter and even ends up getting into fights at times. However, she wishes for Suzume’s happiness more than anyone else. She understands her and gives her a push when it counts.

Takito Kenichi as Nireno Utaro
Nireno Suzume’s father. The second son of Senkichi and Renko. He is in charge of the kitchen in the eatery. Because he grew up with the free spirit of a youth, he does not have authority at home. He is indecisive, carefree and in addition, easily flustered, so he constantly gets yelled at by Haru. However, he soothes the people around him with his positive thinking and is a dependable man who displays unexpected tolerance when someone in the family is in trouble. He loves manga and this has a significant influence later on in Suzume’s life.

Tanihara Shosuke as Hagio Yaichi
Hagio Ritsu’s father. The owner of a photography studio with a long history. He was born in to a wealthy family and is refined and gentlemanly. He has a mild personality and leaves even his son’s education to his wife Wako. He would like Ritsu do decide his own future and support him. Because he only has a son, he treats Nireno Suzume, whom he has known since birth, like a daughter. He handles the school graduation album at the photography studio so Suzume and Ritsu’s classmates often frequent the place.

Harada Tomoyo as Hagio Wako
Hagio Ritsu’s mother. She shares the position of the shopping street’s most beautiful proprietress with Nireno Haru, but her character is the complete opposite. She bakes cakes for her son, plays the piano and reads foreign mystery novels by the front of the photography studio. She looks calm and gentle. But she is actually very candid and scary when provoked. On the other hand, she is unexpectedly compassionate. She has believed in Ritsu’s talent since he was a child and has high expectations of him. Her only flaw is her inability to let go of him.

Toyokawa Etsushi as Akikaze Haori
A popular manga writer who has produced a series of popular manga for teenage girls. Although his style conjures up beautiful girls or boys, he is actually a bigot who makes editors cry and an unsociable middle-aged man. He makes no compromise when it comes to manga. As a high school student, Nireno Suzume gets drawn into Akikaze’s manga world … …

Igawa Haruka as Hishimoto Wakana
She manages the wilful, hard to please Akikaze Haori at his manga office “Office Tinkerbell”. She is beautiful and quick witted. When she gets angry, she talks on and on rapidly and logically. But she is always dressed in frilly, girlish clothing. Her relationship with Akikaze is a mystery.

Nakamura Tomoya as Asai Masato
Hagio Ritsu’s university classmate. He became Nireno Suzume’s first friend after she came to Tokyo. It is difficult to know what he is thinking because he has a flighty air, and is kind to everyone. Strangely enough, he is constantly popular with a number of females and makes many of them cry. Even this mood gives Suzume peace of mind before she knows it and soon …?

Furuhata Seika as Ito Saya
A beautiful girl who visited the high school which Nireno Suzume attends for a friendly match between archery clubs during her school days, and had an electrifying encounter with Hagio Ritsu. The two of them felt that it was destiny but did not expect to meet again. They are reunited at the university campus after he comes to Tokyo. Her presence begins to have a big impact on the bond between Suzume and Ritsu.

This blog contains information and musings on current and upcoming Japanese dramas but is not intended to be comprehensive.
View all posts by jadefrost →
This entry was posted in NHK, Spring 2018 Dramas and tagged Hanbun Aoi, Matsuyuki Yasuko, Nagano Mei, Sato Takeru, Toyokawa Etsushi. Bookmark the permalink.