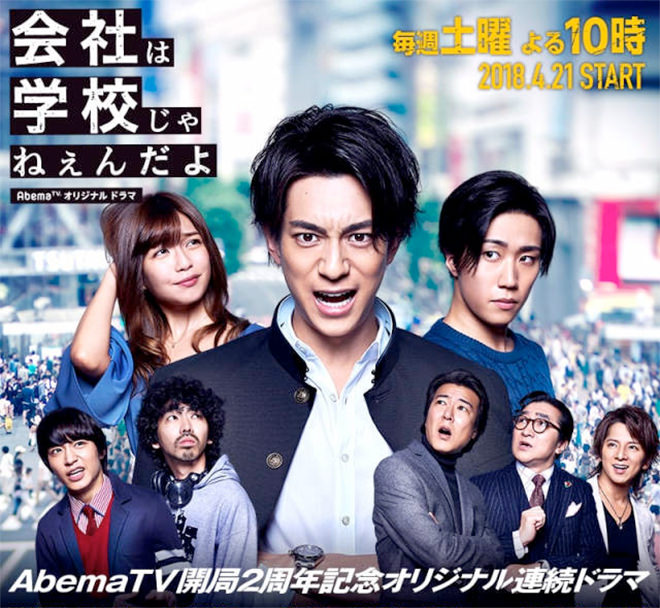 Story
Fujimura Teppei, who was one of the “Shibuya Gyaruo”, had started a business since he was a student. He is impressed by the book of a start-up CEO Sawabe Susumu which he happened to pick up and decides to join the company. Although he enters the start-up with great ambitions, what is waiting for him are PR activities and tedious routine tasks. One day, Teppei enters an internal contest for a new business venture together with his peer Hidaka Takumi and the intern Sasakawa Shota in an attempt to change his present situation. Their proposal for an influencer business catches Sawabe’s attention. However, he has to put the project together with his senior colleague Yamano Taiichiro who coincidentally submitted a similar proposal. Yamano is the son of an advertising agency’s CEO who has been good to Sawabe and he joined the company through this connection. Teppei cannot tolerate Yamano’s unreasonable demands and goes straight to Sawabe. But he is even betrayed by the CEO whom he admired so much. After that, Teppei prepares to start a business with Hidaka who had quit the company with him. Shota joins them too. They blow the 5 million yen they have in hand on office space in Shibuya. 30 million yen in funds is required to make their influencer business a success. The trio participate in venture capital networking events to raise funds but do poorly. Then they go to meet Mobara Boutique’s CEO Kaneki who makes big investments, with their elevator pitch. Their 25-second presentation is a success and he promises to investment. But they later receive a phone call from Kaneki to forget about the investment. They hurriedly go to his office and see someone unexpected. In a last ditch bid, they head to a champagne bar where famous investors get together. Teppei is faced with one obstacle after another, looked down upon by others, betrayed by the people he trusts … Despite these setbacks, he keeps on moving forward while saying, “A company isn’t a school” … …

This blog contains information and musings on current and upcoming Japanese dramas but is not intended to be comprehensive.
View all posts by jadefrost →
This entry was posted in AbemaTV, Spring 2018 Dramas and tagged Kaisha wa Gakkou jane-n da yo, Toyohara Kosuke. Bookmark the permalink.