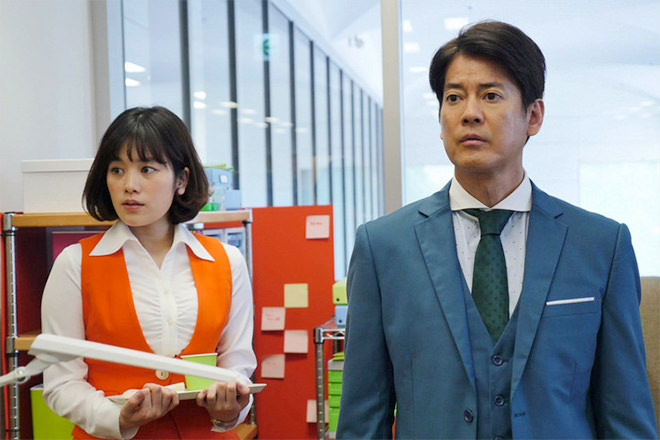 Asu e no Warp
Story: Kobayashi Mineo (Miura Haruma), a young man who dreams of being a movie director, has been making his own films while working part-time but has not had his big break yet. All of his classmates have decent jobs and started families. As he became an adult, receiving invitations to friends’ wedding ceremonies became an inevitable misery. Even Mineo’s girlfriend Sudo Yuki (Sakuma Yui) who aspires to be an actress and once shared his dream, is fed up with him. He is driven to frustration and exhaustion. After several sleepless days, Mineo is prescribed a mysterious drug called Airium by psychiatrist Udo Kimiyasu (Aijima Kazuyuki) at the department of psychosomatic medicine. The moment one tablet of Airium is taken, his memories of the next 24 hours completely disappear and he feels as if he has been carried 24 hours into the future. That is to say, if Mineo takes it before an awful incident, this can be erased from memory as if it never happened. When memories can be controlled by a drug, can life go according to what he wants? Mineo places his hopes on this mysterious Airium but … …
Cast: Miura Haruma, Sakuma Yui, Aijima Kazuyuki

Follower
Story: Fujita Koharu (Shiraishi Mai) is the sparkly Minato-ku OL_Haru. On weekends, she goes glamping which is all the rage, and has BBQs with handsome clients. However, Koharu is occupied in photography of the meat and foreign-made cars and neglects these handsome men because she is the “new queen” of a photo-sharing social media platform and has set her sights on having the most followers. Daily posts on her sparkly “Minato-ku life” “fantastic boyfriend” “800,000 yen casual down” are essential. But all of this completely fake. The real Koharu works for a humble printing company and lives in a cheaply-built apartment. Her life is far from glittering. Koharu’s only joy is increasing her number of followers amid the weary days, particularly the numerous supportive replies of Mimiko@Remote Countryside who recently became a follower. Then one day, Koharu discovers that she has lost in a survey on who is sparkly – Minato-ku OL_Haru or Uruwashi no Uketsukejou Sayu. Uruwashi no Uketsukejou Sayu only has 30,000 followers. This stirs up Koharu’s fighting spirit which is egged on by Mimiko’s replies, and intensifies her fake lifestyle. However one day, Koharu gets a response from Mimiko which says her real life is being watched from nearby.
Cast: Shiraishi Mai, Tomaru Sayaka, Naito Tomoya, Kawamochi Chiaki, Saeki Daichi

Shounen
Story: Office lady Okabayashi Haruka (Kurashina Kana) lives alone and turns down her boss’ suggestion of an arranged introduction with the excuse that she has a boyfriend. She witnesses a traffic accident. The victim is a youth who says his name is Tayama Keisuke after he regains consciousness in hospital. But when a nurse makes a call to the Tayamas, she is told that Keisuke is dead. When the nurse asks him for his name again, he replies that he made a mistake, his name is Ryota. Meanwhile, Haruka returns home to silent phone calls … … Then one day, Haruka is about to leave work when she catches sight of the youth in front of her company. On another day, she looks down from her veranda and there he is looking up at her. Furthermore, when she goes shopping, the youth goes out of his way in the rain to deliver the items she had forgotten. Haruka cannot bear to see him drenched and invites him into her house. However, the moment she takes her eyes from him, the youth begins to check her personal effects.
Cast: Kurashina Kana, Kentaro, Takamura Kaito

Furin Keisatsu
Story: Kuzuki Yoshio (Karasawa Toshiaki) is an ordinary salaryman and devoted husband. He has been living a peaceful, uneventful life and goes to work after kissing his wife Yoko (Konno Mahiru) this morning. One day, while Yoshio is working in office like usual, he sees his subordinate get arrested on suspicion of violating the Adultery Control Act all of a sudden. In fact, the Japanese government was pressured by overwhelming public opinion to set up an agency to crackdown on adultery as a result of a stream of affair scandals in society. A campaign is launched to thoroughly eradicate adultery. Informants are given certificates of commendation and cash rewards; adulterers are handed life sentences; and novels, dramas as well as movies depicting affairs are banned. Adultery is rooted out from this society. Then one day, Yoshio carelessly touches his subordinate Kyono Suzuka (Kakei Miwako) in office. He intends to just drop her an apology message but makes a mistake and sends a lovey-dovey emoji to her mobile phone instead. Adultery control officers led by senior staff Haruta Tsuyoshi (Masu Takeshi) rush in and take Yoshio and Suzuka by force … …
Cast: Karasawa Toshiaki, Masu Takeshi, Kondo Koen, Konno Mahiru, Tateishi Ryoko, Kakei Miwako

This blog contains information and musings on current and upcoming Japanese dramas but is not intended to be comprehensive.
View all posts by jadefrost →
This entry was posted in Fuji TV, Spring 2018 Drama Specials and tagged Karasawa Toshiaki, Kurashina Kana, Yo ni mo Kimyouna Monogatari Series. Bookmark the permalink.