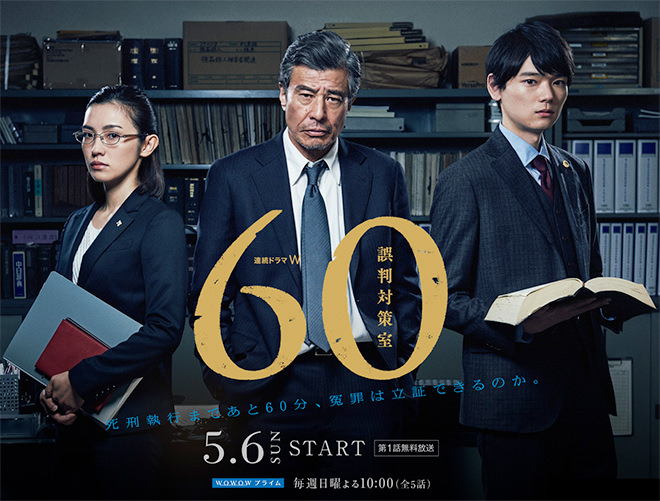 Story
Veteran detective Arima Eiji, who is on the verge of the retirement age of 60, is seconded to a unit which was established under national policy to re-investigate death-row inmates and probes the possibility of wrong convictions. Besides Arima, the young, elite lawyer Sera Shoichi and public prosecutor Haruna Misuzu who was demoted from the Public Prosecutor’s Office, belong to the unit. Arima is known as a go-getter but once wrongly charged an innocent person in a case he was responsible for. He has been doing things by habit and is indifferent at work despite Sera and Misuzu. However, one day, Arima gets information on one of the unit’s cases which he somehow begins to investigate as if he were possessed. He arrives at a death-row inmate called Furuuchi Hirobumi. With feelings of atonement and suspicions of possible false charges, Arima discovers the hidden truth but Furuuchi’s execution is already imminent.

Characters
Tachi Hiroshi as Arima Eiji
A former detective of the Tokyo Metropolitan Police Department’s First Investigative Division. He is near retirement age. He once wrongly charged an innocent person.

Hoshino Mari as Haruna Misuzu
A public prosecutor who has been demoted from the Public Prosecutor’s Office. She acts on the instructions of her boss Nishijima Shintaro.

Furukawa Yuki as Sera Shoichi
An elite lawyer whose father advocated the establishment of this unit to re-investigate death-row inmates. He applies and joins the unit. He shows interest in Arima Eiji’s investigation.

Kan Suon as Furuuchi Hirobumi
A death-row inmate in a murder case involving a mother and child. Arima Eiji re-investigates his case.

This blog contains information and musings on current and upcoming Japanese dramas but is not intended to be comprehensive.
View all posts by jadefrost →
This entry was posted in Spring 2018 Dramas, WOWOW and tagged 60 Gohan Taisakushitsu, Furukawa Yuki, Tachi Hiroshi. Bookmark the permalink.