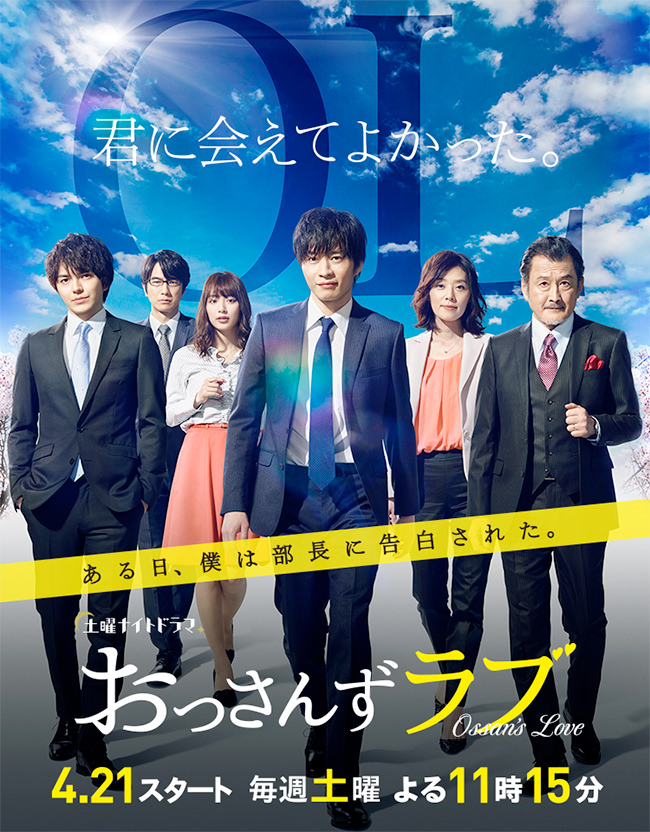 Story
33-year-old Haruta Soichi is a bachelor who works for the sales office of a real estate company. He wants to get married, but he is unpopular with women. While commuting to work one day, Haruta is mistaken for a molester and is saved by his boss Kurosawa Musashi whom he has a high regard for. However, his relief is short-lived. He catches sight of something that should not be seen – his photo is on the locked screen of Kurosawa’s mobile phone! Haruta is shaken. To compound matters, he discovers something outrageous in Kurosawa’s computer while at work. A large number of photographs which were secretly taken of him are stored in a folder labelled “spring”! Haruta had certainly believed that he would meet the love of his life someday but this … this is slightly different from his taste. He completely freaks out and has his guard up around Kurosawa. Meanwhile, Maki Ryota, a handsome junior, transfers from the head office. Maki is courteous and works very hard. Moreover, he is even good at cooking. Just then, Haruta’s mother kicks him out of the house all of a sudden in the hope that he will become independent. Not knowing how to do housework, Haruta is at his wits end. He proposes to live with Maki and is impressed by Maki’s “femininity”. Meanwhile, Kurosawa calls him and is waiting with a bouquet of roses at an extremely romantic place. And then, Kurosawa says he likes him in a very girlish confession of love!

Characters
Tanaka Kei as Haruta Soichi
An employee of Tenkuu Real Estate’s sales office. He is 33 years old and still a bachelor. He wishes to get married but is unpopular. He has been living comfortably at his parents place, but is suddenly made to leave by his mother who wants him to be independent. He feels at a loss. A completely useless guy who does not know how to cook, not to mention the laundry and the way to pay for utilities. He homes in on the femininity of his junior Maki Ryota who has transferred from the headquarters, and begins to live together with him. However, his boss Kurosawa Musashi and even Maki confess that they like him, spoiling his peaceful days. Haruta is completely straight and likes busty females in particular. He has feelings for his childhood friend Arai Chizu and yet he cannot take a step forward.

Yoshida Kotaro as Kurosawa Musashi
Haruta Soichi’s boss who heads a department at Tenkuu Real Estate’s sales office. He is strict but compassionate and only cares about work. He brims with masculinity and is a popular “ideal boss” with both males and females. However, he is actually gay. He stores photos of Haruta that he had secretly taken and suppresses his desires. But eventually caves in. He comes on to Haruta after deciding that he wants to be honest about his own feelings and divorce after being married for a long time. He tries to come out to his wife Choko but … … He maintains a stern personality at work but shows a girlish side to Haruta.

Hayashi Kento as Maki Ryota
Haruta Soichi’s junior. An employee who has transferred from the headquarters of Tenkuu Real Estate to its sales office. He has worked for the company for four years. He is highly educated, handsome and popular with female colleagues. However, he is gay. He learns that Kurosawa Musashi has made a move on Haruta which spurs his own coming out. His personality and interests are masculine and he is rather sadistic. He typically uses honorific expressions and has the manner of a thoughtful, polite junior. However, there are occasions when he shows a black face. He is an all-rounder. He is meddlesome like a mother and lets Haruta live comfortably.

Uchida Rio as Arai Chizu
Haruta Soichi’s childhood friend. The poster girl for Izakaya Wandabo. Her parents’ home is next to Haruta Soichi’s. She is single and does not have a boyfriend now. She has a frank personality and is ambitious. She punched a client in a high position who sexually harassed her at a drinking session, and resigned from her company. She is currently in the process of finding a new job. Like Haruta, she has lived with her parents for a long time. She is slovenly and hates housework. She thinks there is no harm in getting married to a handsome butler who can do all household chores and honestly does not see the merits of married life. She dismisses the good-for-nothing Haruta. However, a sudden rival emerges and she learns that that person is a guy.

Otsuka Nene as Kurosawa Choko
Kurosawa Musashi’s wife. They have never quarreled in the 30 years they have been married. However, right after their 30th wedding anniversary, he unexpectedly broaches divorce. She does not know the reason and is astounded. Presuming that he must be having an affair, she nonchalantly visits his workplace in an attempt to identify the other party and poke around. But soon learns that her husband of 30 years is gay … …

This blog contains information and musings on current and upcoming Japanese dramas but is not intended to be comprehensive.
View all posts by jadefrost →
This entry was posted in Spring 2018 Dramas, TV Asahi and tagged Hayashi Kento, Mashima Hidekazu, Ossans' Love Series, Otsuka Nene, Tanaka Kei, Yoshida Kotaro. Bookmark the permalink.