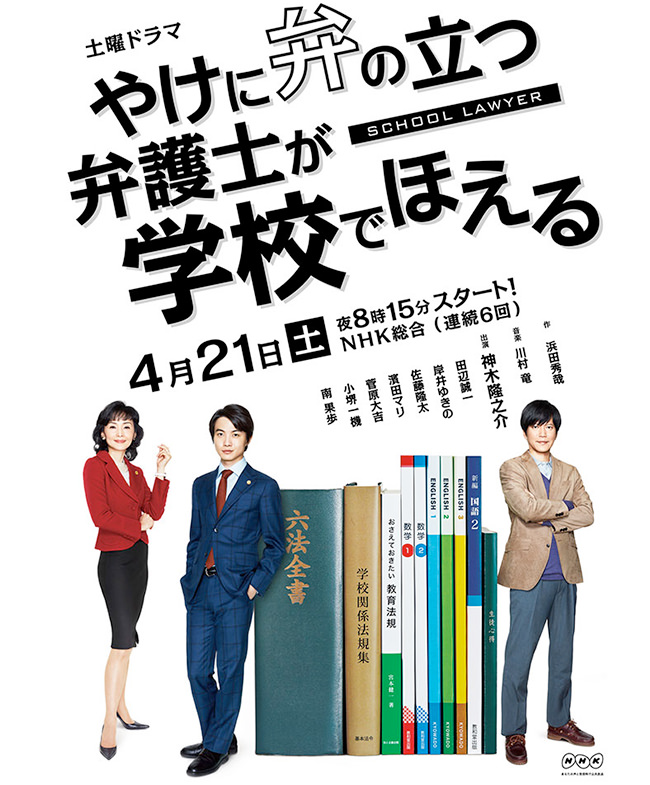 Story
Rookie lawyer Taguchi Shotaro is in the principal’s office of Aoba Daichi Junior High School. Sent by his boss Takashiro Eiko for the School Lawyer system which is being introduced this spring, he meets a parent who has come in protest against the school for the corporal punishment her daughter received. She insists on suing the school. In response, Taguchi states that her action constitutes forcible obstruction of business and smoothly turns her away. The principal Kuramori Kenzo is pleased that a situation was averted. But the curriculum coordinator Miura Yuji opposes Taguchi’s method. Several days later, the punishment issue takes an unexpected turn. Angered by Taguchi’s attitude, the parent sends a document containing the form teacher Mochizuki Shiori’s admission that she had used physical punishment … and her signature of all things. How will Taguchi solve this problem? This is the beginning of days wrestling with school problems with no answers.

Characters
Kamiki Ryunosuke as Taguchi Shotaro
A rookie lawyer who is an extremely good speaker and hardcore in his dislike of schools. He is sent to Aoba Daichi Junior High School as a school lawyer. He has an honest personality and will not leave something that is odd alone. He has not stood in a courtroom yet.

Tanabe Seiichi as Miura Yuji
The curriculum coordinator of Aoba Daichi Junior High School. A veteran teacher of 25 years who is trusted by the students and parents. He advocates “school rules in schools” and sharply opposes school lawyer Taguchi Shotaro.

Kishii Yukino as Mochizuki Shiori
She has been a teacher for three years. She is troubled by the protests of a parent Mishima Makiko of her form class against the corporal punishment that her daughter received. She struggles with the gap between the ideals and reality of being a teacher.

Kosakai Kazuki as Kuramori Kenzo
The principal of Aoba Daichi Junior High School. He fears rocking the boat and promoted the introduction of the school lawyer system as a means to avert trouble. He has designs on something.

Minami Kaho as Takashiro Eiko
The head of the law firm Takashiro. She steadily built up her achievements in corporate law and started her own firm in her 30s. She sends her subordinate Taguchi Shotaro, who hates schools, to be a school lawyer.

This blog contains information and musings on current and upcoming Japanese dramas but is not intended to be comprehensive.
View all posts by jadefrost →
This entry was posted in NHK, Spring 2018 Dramas and tagged Kamiki Ryunosuke, Tanabe Seiichi, Yake ni Ben no Tatsu Bengoshi ga Gakkou de Hoeru. Bookmark the permalink.