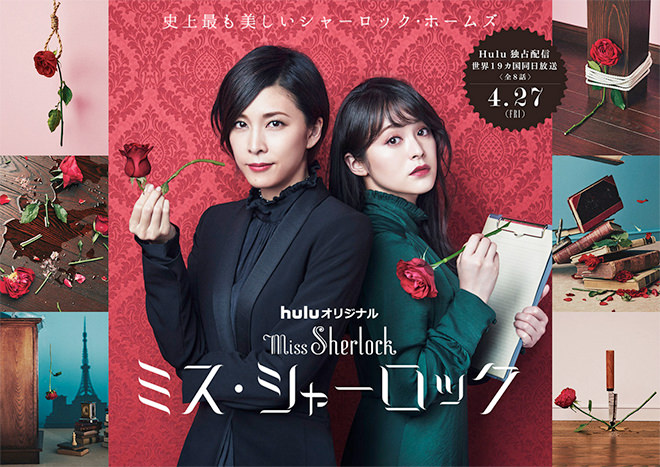 Story
What if Sherlock Holmes and Dr John Watson were in present-day Japan? And what if they were both Japanese women – Sara Shelly Futaba, an investigation consultant to the police department who solves bizarre and difficult cases, and Dr Tachibana Wato, a surgeon. Wato has just returned to Japan from a volunteer doctors’ mission in Syria, is met in the arrival lobby of Haneda Airport by her mentor Mizuno Takayuki. She is delighted to see him again after a long time. However, this happiness is short lived. He suddenly dies at the airport after his stomach explodes. Inspector Reimon Gentaro and his subordinate Shibata Tatsuya are put in charge of the case. Wato is brought to a police precinct where she meets Sherlock who is inspecting Mizuno’s body in the morgue with her hands. The two of them take on a serial murder case called the Devil’s Foot.

Characters
Takeuchi Yuko as Sara Shelly Futaba (Sherlock Holmes)
A Japanese who was born in England. She has returned to Japan and is an investigation consultant to the police department for bizarre and difficult cases because of her brilliant powers of observation and deduction. She is a person who lives with knowledge and smarts as weapons to protect herself. She does not open her heart to other people but solves cases every day among the very few people who understand her.

Kanjiya Shihori as Dr Tachibana Wato (John Watson)
An outstanding surgeon with a strong sense of justice. She went against the wishes of her parents who are both doctors and took up a position overseas with a team of volunteer doctors. However, she returned to Japan painfully aware of her own powerlessness. She meets Sherlock through a case and they begin living together. Because she is unpretentious and lets her feelings show, she is not fully in control of herself. Unlike Sherlock, she acts on her emotions.

Takito Kenichi as Reimon Gentaro (Inspector Lestrade)
An inspector of the Tokyo Metropolitan Police Department’s First Investigative Division. A rational thinker who is competent but also crafty, and makes use of Sherlock’s genius for his career advancement. He is good at maneuvering and brilliantly deals with work for his subordinate Shibata Tatsuya. He also knows the latest intelligence.

Otani Ryohei as Moriya Toru
A battlefield photographer who went through the same circumstances as Dr Tachibana Wato and came back to Japan. However, he suffers from post-traumatic stress disorder. He goes to the same clinic and meets Wato who is there for counselling. They hit it off and their relationship develops into a romance.

Ozawa Yukiyoshi as Futaba Kento (Mycroft Holmes)
The Director for Cabinet Intelligence Analysis from the Cabinet Information Research Office. He has a lot of influence in financial and political circles but has no friends. He is always busy and has the habit of saying, “I only have 20 minutes.” He worries about Sherlock deep down.

Ito Ran as Hatano Kimie (Mrs Hudson)
The landlady of the residence which Sherlock lives in, and a widow. Her late husband worked for a trading company. She was helped out of a crisis by Sherlock’s parents in the past and supports Sherlock to repay their kindness. She knows everything that happens to her thereafter.

This blog contains information and musings on current and upcoming Japanese dramas but is not intended to be comprehensive.
View all posts by jadefrost →
This entry was posted in Hulu, Spring 2018 Dramas and tagged Kanjiya Shihori, Miss Sherlock, Otani Ryohei, Ozawa Yukiyoshi, Takeuchi Yuko, Takito Kenichi. Bookmark the permalink.