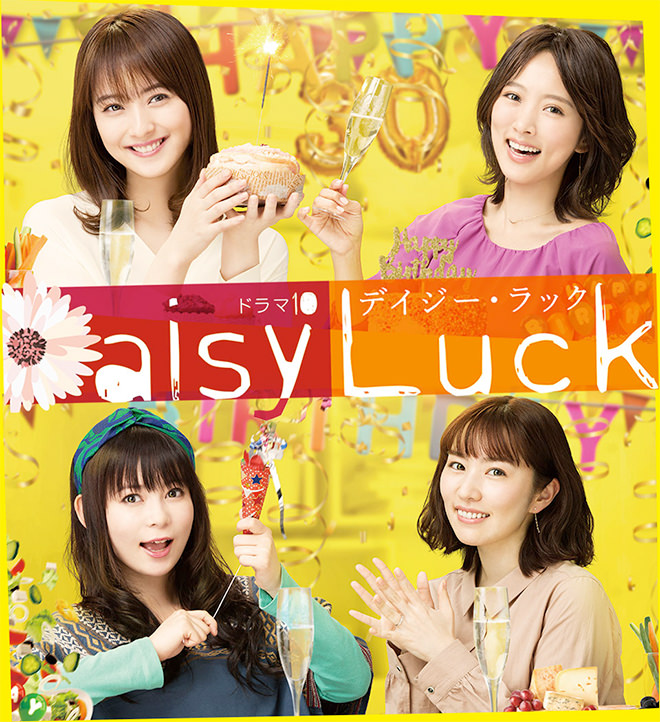 Story
Yamashiro Kaede, Suou Kaoru, Sanuki Michiru and Iwashiro Emi have been friends since elementary school. When they were kids, they named themselves the Hinagiku-kai. The four of them see each other for the first time in a long while on the day of Emi’s wedding ceremony. However, on that day, the company that Kaede works at goes bankrupt all of a sudden. She is also dumped by her boyfriend Shimizu Kota and finds herself without a job and love as the age of 30 looms. Kaede makes the decision to become a baker which was her childhood dream. Although she gets a job at a bread shop, the breadmaking profession is hard. The senior baker Aki Kaito is a tough instructor and she has to do her very best to keep up. As a new chapter in Kaede’s life begins, there are unexpected developments for her three friends. Kaoru who works at a high-end beauty salon has her fighting spirit roused by the appearance of Yamato Koichiro, a salesman from a rival company; Michiru is unable to sell her bags and continues to live in poverty; and newly-married Emi quickly faces marital problems. What will tomorrow bring for the four of them?

Characters
Sasaki Nozomi as Yamashiro Kaede
She lost her job at a jewellery shop and her dream of getting married to her boyfriend just before the age of 30. She completely regrets her optimistic outlook on life. In her attempt to restart her life, she is headed in … … Despite her warm and fuzzy character, she spends her days in anxiety about work and a new romance.

Natsuna as Suou Kaoru
She works in sales at a beauty salon and works energetically to feel a sense of self-fulfillment. While she forges ahead in her work, she is two-timed by her younger boyfriend Makimura Shinji and somehow has difficulty achieving happiness in her private life. She meets Yamamoto Koichiro at a competition for a new store opening and has a presentiment of a turbulent romance with him. Will she choose work or romance?

Nakagawa Shoko as Sanuki Michiru
A freelance craftswoman of bags. The bags made with her unique sense of aesthetics are generally not appealing and sales are slow. She is financially strapped. Suou Kaoru’s younger brother Takahiro adores her. Her biggest secret is that she is 30 and is inexperienced in … …

Tokunaga Eri as Iwashiro Emi
The only married person among the Hinagiku-kai. She happily settles down with Takashi who is just one year apart and becomes a housewife. However, her husband tends to be away from home because of frequent business trips and she is far from enjoying newly married life. On top of that, she suspects him of having an affair.

Suzuki Nobuyuki as Aki Kaito
He has come back to Japan for the first time in three years after training in breadmaking in Europe. He used to work at Kitamura Bakery where Yamashiro Kaede begins work. Upon his return, he is appointed her instructor. He has excellent skills and is a caring person. However, he is very demanding when it comes to work.

Kiriyama Ren as Yamato Koichiro
He is in charge of sales at a company which is Suou Kaoru’s rival. He is a sarcastic man. But he is sincere in his work and impartial. He is a rather capable person. At first, he is purely interested in Kaoru as a business partner but … …

Isomura Hayato as Suou Takahiro
Suou Kaoru’s younger brother. He works for a publishing company and is a writer for the movie section of its information magazine. He is friendly and has a cheerful personality which everyone likes. He has been on good terms with his sister’s friend Sanuki Michiro since childhood and calls her “brother” affectionately.

Hasegawa Tomoharu as Iwashiro Takashi
Iwashiro Emi’s husband. A company employee. He is mild-mannered and kind. A gentleman and the perfect husband. However, he is busy with work and does not pay her much attention. His flaw is that he barely notices the changes in his wife because he is rather insensitive.

Yanagi Shuntaro as Makimura Shinji
Suou Kaoru’s boyfriend. A university student who is like her pimp. He is called Shin-chan and is a philanderer.

This blog contains information and musings on current and upcoming Japanese dramas but is not intended to be comprehensive.
View all posts by jadefrost →
This entry was posted in NHK, Spring 2018 Dramas and tagged Ashina Sei, Daisy Luck, Natsuna, Sasaki Nozomi, Suzuki Nobuyuki, Tokunaga Eri. Bookmark the permalink.