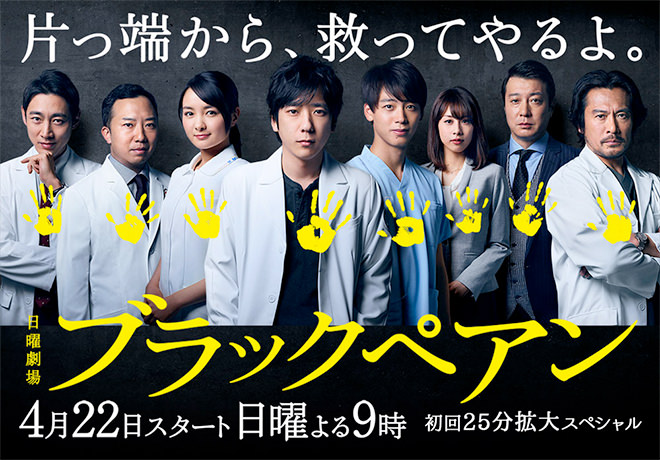 Story
Professor Saeki Seigo of Tojo University Medical Hospital in the Tokai region is one of the best cardiac surgeons in the world. Called “God’s hands”, he always uses the black haemostatic forceps referred to as the “black pean”. On the day Saeki performs an extremely difficult surgery, doctors from rival hospitals including Professor Nishizaki Keisuke of Teika University come to watch him at work. Nishizaki is rumoured to be in a head-to-head race with Saeki in the elections for the Japan Association of Surgeons’ next president three months later. The surgery has also drawn the attention of clinical trial coordinator Kinoshita Kaori and medical journal chief editor Ikenaga Hideto. But during this important operation, there is a sudden change in the condition of another of Professor Saeki’s patients. His surgical first assistant and a resident, Sera Masashi, deal with the patient. However, the condition becomes critical and they are at their wits end. While Takashina Gonta, a new lecturer from Teika University Hospital watches on, a man appears in the operating theatre. He is Tokai Seishiro, a surgeon who is a genius in suturing techniques. Called the devil of the operating theatre by colleagues, he is a loner with no interest in career advancement and an eternal rank-and-file medical staff at the hospital. While he prides himself for his 100% success rate, his arrogance constantly causes friction with the people around him. Meanwhile, Takashina brings in the latest surgical equipment called Snipe in an attempt to promote new forms of surgery. He is an “assassin” sent by Nishizaki to Tojo University Medical Hospital. Takashina’s boast that surgeons’ skills are completely unnecessary, sparks an outcry in the hospital and medical field. Questioning whether there is an ulterior motive, Tokai opposes it. Meanwhile, jousting for the truth hidden in the black pean and Tokai’s own connection are both revealed.

Characters
Ninomiya Kazunari as Tokai Seishiro
A low-ranking staff of Tojo University Medical Hospital’s Department of General Surgery, which is called Saeki Department of Surgery. However, he is a gifted, solitary surgeon who boasts a 100% surgery success rate. He loathes doctors with no skills and his arrogance frequently cause friction among the people around him. He is nicknamed the “devil of the operating theatre” because he has gained a reputation for “keeping patients alive and killing doctors” He always gets into surgery as an assistant and never the operating surgeon for some reason. But he is one of the few in the hospital with experience in performing heart surgery.

Takeuchi Ryoma as Sera Masashi
A houseman in his first year at Saeki Department of Surgery. He was assigned to the department which he wished to go to. He has a straightforward personality and passion for medical care. Tokai Seishiro becomes his supervisor as a result of some incident and his life as a houseman completely changes.

Aoi Wakana as Hanabusa Miwa
A rookie nurse who has just been put in charge of putting out instruments in surgeries. She is diligent and gentle in nature, but also resilient and perceptive. Although she and Sera Masashi are in different positions as doctor and nurse, they talk to each other about their worries and help each other.

Ichikawa Ennosuke as Nishizaki Keisuke
A professor of Teika University which boasts of an organised research efforts in the Department of Cardiac Surgery. He is competing with Saeki Seigo of Tojo University Medical Hospital in the elections for the Japan Association of Surgeons’ next president, and they are conscious of each other. He sends Takashina Gonta to Tojo University Medical Hospital with Snipe in order to establish the latest medical treatment technique that will replace the Saeki procedure.

Kato Ayako as Kinoshita Kaori
A former nurse who has now become the point of contact for trials of new drugs and medical devices as a clinical trial coordinator. She interacts with Professor Saeki Seigo, Tokai Seishiro and others on equal footing. She is a person who leads the medical care industry with her own convictions.

Koizumi Kotaro as Takashina Gonta
A new lecturer who has taken up a position in Saeki Department of Surgery. He has had an illustrious career, having served as the assistant to the professor of the First Department of Surgery at the prestigious Teika University. He introduces surgical equipment called Snipe and aims to allow anyone to safely perform difficult heart surgeries.

Uchino Masaaki as Saeki Seigo
The professor of Tojo University Medical Hospital’s Department of General Surgery. He is an internationally respected authority in the field of heart surgery and the only one in the world who can perform the heart surgery called the Saeki procedure. He aims to be at the top of the Japan Association of Surgeons and is competing with Teika University’s Nishizaki Keisuke to be its next president.

This blog contains information and musings on current and upcoming Japanese dramas but is not intended to be comprehensive.
View all posts by jadefrost →
This entry was posted in Spring 2018 Dramas, TBS/MBS and tagged Black Pean, Koizumi Kotaro, Ninomiya Kazunari, Uchino Masaaki. Bookmark the permalink.