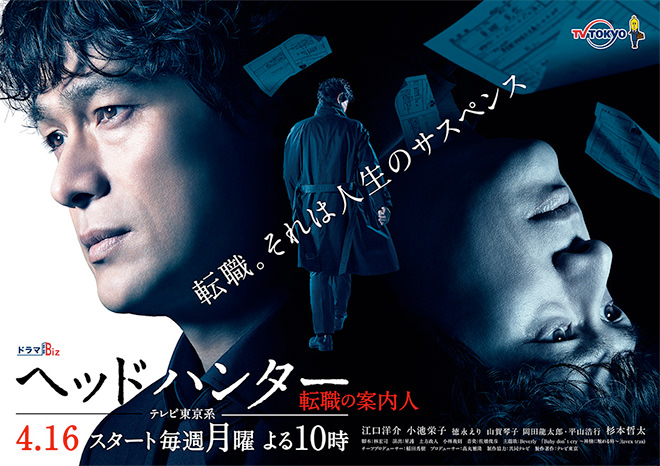 Story
Japan’s labour environment is about to transform dramatically with the changing times. In the past, lifetime employment had been taken for granted. Now, the resistance to changing occupations has diminished and the scale of this market keeps growing as companies compete to survive. Yokogawa Ryuichi, the company president of the large consumer electronics manufacturer Maruyoshi Manufacturing, announces significant restructuring in front of a crowd of media. An engineer Taniguchi Takao watches this on a monitor in a conference room. He looks fed up with the passive management policy. At that moment, he flashes back to the words of Kurosawa Kazuki, the CEO of the recruitment agency SAGASU and a maverick headhunter. Several days ago, Kurosawa had offered him a career change along with the question, “Don’t you want to know what you’re worth?” He was headhunting him for his skills as an engineer of audio equipment. However, Taniguchi who had refused a career change thrice in the past, is wary. SAGASU is a small agency which handles only difficult, unassailable career change cases. Kurosawa is a maverick headhunter who goes deep into the minds of potential candidates and corporate clients to achieve ideal matches with techniques that can be called aggressive. At times, he is a saviour, at other times a devil. He is supported by his employees Haitani Tetsuya, who is in charge of general affairs and accounting; and Tatebayashi Miyu, a researcher who is highly skilled with computers. Kurosawa’s background is a mystery. Even Haitani, his associate of 30 years, does not know the details and they share a complicated relationship. One day, Haitani and Miyu happen to meet Akagi Kyoko, who is in the top management of the industry’s largest outplacement company Bridge, at a party. Kyoko aims to raise the level of confidence in the industry. She hates the way Kurosawa works and burns with a sense of rivalry. Taniguchi is undecided about a career change because of his family and senior. Will Kurosawa succeed in headhunting him?

Characters
Eguchi Yosuke as Kurosawa Kazuki
The CEO of the recruitment agency SAGASU and a headhunter. A maverick in the industry, his philosophies are “Never reject an offer”, “It’s up to a person to make the best of being headhunted or not”, “I look after those I’ve headhunted until the end”. He is a “cold-hearted” outlaw whose methods are unconventional and aggressiveness headhunting in the literal sense. An ambitious man with a keen mind and excellent memory, he is an expert on the industry. He thoroughly investigates his targeted person and his mission is to match the person with an organisation which he thinks is the best. However, he has his own ideas about what he considers the “best”

Koike Eiko as Akagi Kyoko
A senior adviser of the industry’s largest outplacement company Bridge. A capable woman who went to the US after she graduated from university and obtained an MBA. She is intent on developing the headhunting industry, which has finally been widely recognised in Japan, like the US. She is unhappy with the rather reckless methods of SAGASU.

Sugimoto Tetta as Haitani Tetsuya
The assistant to SAGASU CEO Kurosawa Kazuki. He supports Kurosawa in charge of general affairs and accounting which Kurosawa is not very good at. He and Kurosawa have a connection but he typically never gives the slightest indication of this bitter past and handles routine tasks with an easygoing manner. He is acquainted with reporters of trade publications and shady brokers. He has a thorough knowledge of the background of every single company.

Hirayama Hiroyuki as Sanagi
He is mainly a freelance journalist for business magazines. Unconventional and well-informed, he has known Kurosawa Kazuki since his days as a former business newspaper journalist. He secretly undertakes dirty work behind the scenes for SAGASU even now.

This blog contains information and musings on current and upcoming Japanese dramas but is not intended to be comprehensive.
View all posts by jadefrost →
This entry was posted in Spring 2018 Dramas, TV Tokyo and tagged Eguchi Yosuke, Hayashi Koji, Headhunter, Koike Eiko, Tokunaga Eri. Bookmark the permalink.