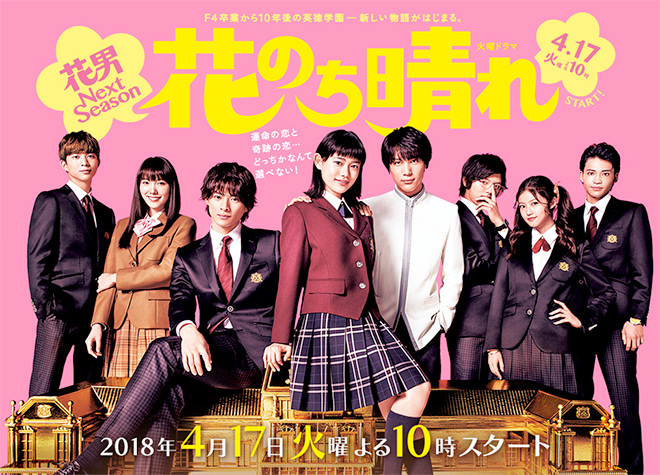 Story
Eitoku Senior High School, a prestigious school for the children of wealthy familes, has lost some of its former glory since the legendary F4 graduated 10 years ago. In the spring of 2018, the large cosmetics manufacturer Edo Quality, which second-year student Edogawa Oto’s father Makoto runs, goes bankrupt and her life completely changes. She lives in poverty with her mother Yukie while she attends Eitoku Senior High School as a “commoner”. Meanwhile, the charismatic Kaguragi Haruto is worshipped at Eitoku Senior High School. His father Iwao is the young chairman of Kaguragi Holdings which is one of the three great Japanese conglomerates right up there with the Domyoji Group. An admirer of F4’s Domyoji Tsukasa, he forms C5 with childhood friend Taira Kaito and three other students to restore the school’s former glory. They carry out “commoner hunting” to remove students who cannot give donations to the school. Oto is afraid her secret will be disclosed if she becomes the target of this “commoner hunting”. She is supposed to marry her childhood friend Hase Tenma, who is the popular student council president of the rival Momonozono Academy, when she turns 18. But the condition is that she has to attend Eitoku Senior High School until then. Then one day, Oto and Haruto have the worse possible encounter … …

Characters
Sugisaki Hana as Edogawa Oto
A student of Eitoku Senior High School. Her father ran the large cosmetics manufacturer Edo Quality but her life completely changes after the company’s bankruptcy. They are forced to live in poverty and her father now works away from home. She works part-time at a convenience store to support the family instead of her mother Yukie who was brought up like a princess, and is in charge of all the housework. She is set to marry Hase Tenma when she turns 18. Because the condition is that she has to be enrolled in Eitoku Senior High School until then, she conceals her “commoner” status from the people around her and attends school.

Hirano Sho as Kaguragi Haruto
The student of Eitoku Senior High School and leader of C5. He is the son of Kaguragi Iwao, the chairman of Kaguragi Holdings, and adored by students. He has the habit of posturing and playing the second Domyoji and charismatic leader in front of students. But he is actually mentally weak and good-for-nothing. He has idolised the F4 since he was saved from extortion by Domyoji Tsukasa when he was in elementary school and continues his efforts to come close to Domyoji. He forms C5 in order to restore Eitoku Senior High School’s former glory when the F4 were in school. He plans the ill-conceived “commoner hunting” to preserve the status of the school.

Nakagawa Taishi as Hase Tenma
The student council president of the rival Momonozono Academy which is quickly catching up to Eitoku Senior High School. He is the son of Hase Kazuma, a man who leads the IT industry. Charismatic and good at both academics and sports, he is trusted by the students and enjoys popularity. This is reminiscent of F4 in the past but he does not bully the weak like they did and is beyond reproach. He is very self-reliant as a consequence of his mother’s death. He is engaged to childhood friend Edogawa Oto because his late mother Miyoko and Oto’s mother were close friends.

Hamada Tatsuomi as Taira Kaito
He has the highest IQ in Eitoku Senior High School and is the brains of C5. The son of a political family which moves the country. He understands Kaguragi Haruto the most. However, he considers the closing distance between Haruto and Edogawa Oto to be detrimental to the school and C5, and is not very pleased.

Imada Mio as Maya Airi
The only girl in C5. She is the daughter of a real estate tycoon. She acts cute but is actually the one among the C5 members who enjoys “commoner hunting” the most. She has been in love with Kaguragi Haruto after he saved her when they were kids.

Iitoyo Marie as Nishidome Megumi
Nicknamed Megurin, she is the daughter of the owner of a conglomerate and a popular model. A beautiful girl who is loved by everyone. She comes to genuinely like Kaguragi Haruto after he practices confessing his feelings for Oto on her. She transfers to Eitoku Senior High School at Taira Kaito’s invitation.

Kinami Haruka as Konno Arisa
A senior staff at Edogawa Oto’s part-time job. She is very cheerful and candid. She has looked after Oto, who was brought up in a wealthy family, since the beginning of her part-time work and taught her how to wring water out of a rag, how to cook and all sorts of tips on saving. She is like an elder sister to Oto and the only person she can confide in.

Horiuchi Keiko as Hase Miyoko
Hase Tenma’s mother. She died after a long battle with illness before Tenma and Edogawa Oto attended high school. She had been a close friend of Oto’s mother Yukie since they were students. She is kind-hearted and put on a brave face despite her illness. When she realised that she was dying, she willed that the engagement between her son and Oto would continue.

Tet Wada as Hase Kazuma
Hase Tenma’s father. He is the CEO of the IT company Hase Live, a company representative of Japan. He has exceptional business sense and made it through hard work. He was emotionally drained during his wife Miyoko’s long battle with illness and consulted his secretary Rie who was his right hand. After Miyoko passed away, he and Rie naturally grew close and he remarried.

Takaoka Saki as Hase Rie
Hase Tenma’s stepmother and the former secretary of Hase Kazuma. After they got married, she quit her job in order to support the Hase family from within. Bound by the “curse” of the late Miyoko, she resents the engagement between Tenma and Edogawa Oto which makes her feel Miyoko’s presence, and wants to get it nullified.

Takito Kenichi as Kaguragi Iwao
Kaguragi Haruto’s father. The young chairman of Kaguragi Holdings which is one of three Japanese conglomerates in the same league as Domyoji Group. Because he secured his position as the heir after he overcame many of the tests that he was put through by the previous generation, he has been assigning tests to Haruto since he was a child.

Kikuchi Momoko as Edogawa Yukie
Edogawa Oto’s mother. She was brought up like a princess and has cheerful and humorous personality. Her life completely changes after the large cosmetics manufacturer Edo Quality which her husband runs, goes bankrupt. She is forced to live in poverty in a shabby apartment with Oto. However, she cannot the time when they were wealthy and often gets scolded by Oto for her extravagance. The marriage of Oto and Hase Tenma keeps her going.

This blog contains information and musings on current and upcoming Japanese dramas but is not intended to be comprehensive.
View all posts by jadefrost →
This entry was posted in Spring 2018 Dramas, TBS/MBS and tagged Hana Nochi Hare, Sorimachi Takashi, Sugisaki Hana, Takaoka Saki, Takito Kenichi. Bookmark the permalink.