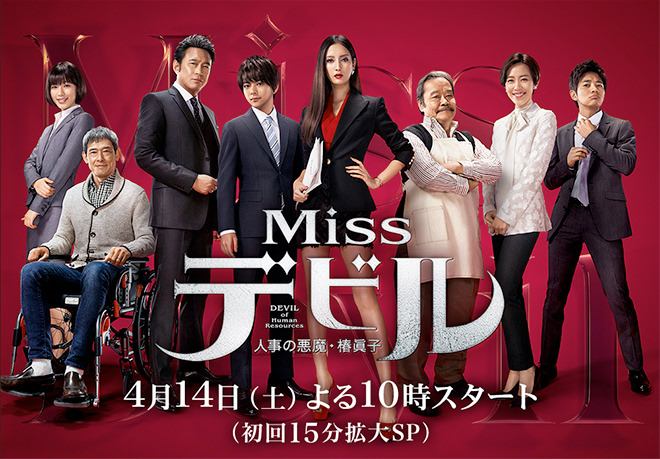 Story
Saito Hiroshi is a kind-hearted young man loved by his family. He has joined Kyoa Kasai Insurance, a well-established general insurer, and come to the day of the welcome ceremony with Todo Mafuyu, Nagumo Yoichi and Sekiuchi Hidetomi whom he had grown closer to while job-hunting. What awaits these first-time employees are chairman Kitamura Kanji whose motto is “employees are family”, inscrutable CEO Osawa Tomoharu, the shrewd but compassionate head of human resources Ito Chihiro, and human resource consultant Tsubaki Mako who has come to because Osawa chose her. Saito, Mafuyu, Nagumo and Sekiuchi undergo a two-week orientation with Mako from the day they join the company. On the first day, Mako assigns the 50 new employees to write a letter of resignation and announces that she will narrow them down to 10. They are split into 10 teams and made to compete on rankings in every challenge such as running, digging a hole or citing the shortcomings of teammates. As they grapple with the intense orientation, exhaustion gradually sets in and some new employees begin to submit the letter of resignation which they had written on the first day. Saito grits his teeth and endures the orientation for the sake of his father Osamu, who is handicapped from the waist down after an accident, and his family. Meanwhile, Sekiuchi whose teammate Kusakabe has connections to the Ministry of Finance, is psychologically driven to a corner by Kusakabe and his lackeys. By this time, more than 30 new employees have submitted their letter of resignation. Chihiro questions Mako’s methods and proposes to stop the orientation but … … Dubbed the “devil of human resources” for her coldhearted, merciless ways, Mako tackles problems such as sexual harassment, power harassment, factional fighting and monster employees which can occur in any company with bold tactics and a signature phrase “You have the right to quit this company”.

Characters
Nanao as Tsubaki Mako
A highly skilled human resource consultant who has returned to Japan after achieving success overseas. She is called the “devil of human resources” for her coldhearted, merciless ways. She will resort to any means for reform. She is currently contracted to Kyoa Kasai Insurance.

Sato Shori as Saito Hiroshi
He becomes Tsubaki Mako’s direct subordinate as a new employee of Kyoa Kasai Insurance. A native of Nagano Prefecture. His parents are genuinely happy that he has joined a big company in Tokyo. He is a candid, straightforward person who has not hidden anything since he was a child. He finds himself at the mercy of Mako from the orientation.

Kimura Yoshino as Ito Chihiro
The head of Kyoa Kasai Insurance’s Human Resources Department. She sympathises with the suffering of the new employees who are driven to the edge under Tsubaki Mako and encourages them as she watches over them. She often protests against Mako’s merciless tactics and clashes with her at every turn.

Funakoshi Eiichiro as Osawa Tomoharu
The CEO of Kyoa Kasai Insurance since three years ago. He achieved results as Kitamura Kanji’s right-hand man. Although he reveres Kitamura, he has a different mentality and aggressively tries to push for reforms. He is the person who brought Tsubaki Mako into the headquarters.

Nishida Toshiyuki as Kitamura Kanji
The former CEO of Kyoa Kasai Insurance, and current chairman. When he was CEO, he revived the business which suffered due to the collapse of the bubble economy. The business is suffering again because he has maintained an outdated culture, but many people in the company admire him. Tsubaki Mako who has embarked on hard reforms, gives him a sense of crisis and he tries to delve into her true intentions.

This blog contains information and musings on current and upcoming Japanese dramas but is not intended to be comprehensive.
View all posts by jadefrost →
This entry was posted in NTV, Spring 2018 Dramas and tagged Kimura Yoshino, Miss Devil, Nishida Toshiyuki. Bookmark the permalink.