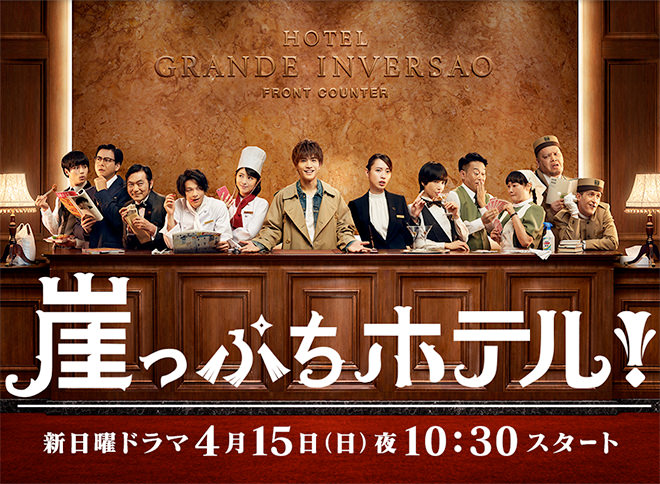 Story
Nestled in the suburbs, The Grand Inversao was once a grandiose hotel well-known to only people in the know. It is now on the brink of bankruptcy with a huge debt of 300 million yen. Its young general manager Sakurai Sana works hard to turn the hotel around, but it is an uphill battle with unmotivated, incapable and very proud staff. Hoping to boost revenue even if only a little, Sana accepts groups. These guests scurry across the lobby in yukatas and have everything their own way. While Sana is being lectured by assistant general manager Tokisada Masao, who is secretly scheming to sell out the hotel, she picks out a young man Ukai Naoya, who has fallen asleep in the lobby, simply because his extremely casual attire looks incongruous in this formal setting. With a sigh, she approaches him. Ukai suddenly gets up. He has no time for what Sana has to say and rattles on with a smile that he wants to stay here. The room he wishes to have is the Grand Inversao’s most expensive suite room … … Going with the flow, Sana agrees to his stay but Ukai proceeds to make a series of baffling and difficult demands. He wants to swim in the outdoor pool in April which is still chilly. Sana is at a complete loss as to what to do. However, the staff including bartender Edakawa Kozue who has a prejudice against Tokisada and Sana, look displeased. They refuse this difficult task and give Sana the cold shoulder. Sana has to take on everything. No one knows just yet that the arrival of this mysterious guest will overturn everything about this hotel … … At that moment, Sasagawa Kanako, an old-time guest who visits Hotel Grand Inversao to stay once every five years, brings her granddaughter Nanami to the hotel. Tokisada wrings his hands but proudly attends to her. Meanwhile, Sana complies with Ukai’s demand and cleans the pool alone in overalls. In the common room for the staff, Tanzawa Akihito reads a magazine alone and is dumbfounded when he realises Ukai’s true identity.

Characters
Iwata Takanori as Ukai Naoya
A mysterious guest who shows up at Hotel Grande Inversao. His easygoing attitude makes it hard to understand what he is thinking. He acts according to his own philosophy and seems indifferent to everything. Because of that, everyone thinks he has no interest in other people. However, he is observing people around him very closely with his keen insight. He bluntly speaks what he thinks and always gets straight to the point, but he is simply impossible to hate. He likes to participate in prize competitions. Even though he wins prizes which nobody wants, he still takes pride in it like a young boy.

Toda Erika as Sakurai Sana
After her father’s death, she became Hotel Grande Inversao’s general manager at the age of 29. Her father was sick in bed and they have 300 million in debt because of her older brother who served as the general manager in place of their father. Then he went missing. While everyone was about to give up on the hotel, she volunteered to be the general manager. She is diligent and straightforward. Because of this, she keeps being treated with contempt by the idiosyncratic staff and becomes a general manager with no authority.

Hamabe Minami as Hourai Haru
A new patissier who recently started working at Hotel Grande Inversao. She is naive and cannot read situations at all. But all is forgiven with her carefree smile which disarms everyone.

Nakamura Tomoya as Eguchi Ryuji
Hotel Grande Inversao’s executive chef. Although he is skilled, he cuts corners and is crazy about boat racing. However, he and Hourai Haru are the only employees who cook. He has lost his motivation because customers never come. He now reads boat racing news in the kitchen as he sluggishly issues instructions. He is brusque and has the temperament of an artisan. The previous master chef and sous chef quit in succession, which is how he got to his present position.

Suzuki Kosuke as Tanzawa Akihito
Hotel Grande Inversao’s self-centred administrative manager who is interested only in calculating profit and loss. A jack of all trades who manages human resources, accounting, general affairs, sales and even event planning. He is high-handed and always coolly looks down on the incapable hotel staff, but he is good at his job. Once he opens his mouth, he will keep complaining about money including debt. His sarcasm has no match, but he has a big inferiority complex.

Ryou as Edakawa Kozue
The bartender at Hotel Grande Inversao who is tipsy from cocktails from before business hours. She is beautiful and classy, and is most incongruous in the hotel’s current state. She gets to work in her free time and walks around the hotel, dressed in what she likes while everyone is in uniform. No one knows if she is doing her work or not.

Watanabe Ikkei as Tokisada Masao
An old-timer who serves as assistant general manager under Sakurai Sana. He has been working since the time Sana’s father was general manager. He completely treats the young Sana with contempt and controls the hotel as he pleases. There are even rumours that he had some involvement in the hotel’s enormous debt. Although he is very proud and overbearing, he is actually a real coward. He is the only married man but he likes Edakawa Kozue and woos her with old-fashioned pick-up lines.

This blog contains information and musings on current and upcoming Japanese dramas but is not intended to be comprehensive.
View all posts by jadefrost →
This entry was posted in NTV, Spring 2018 Dramas and tagged Gakeppuchi Hotel, Hamabe Minami, Toda Erika. Bookmark the permalink.