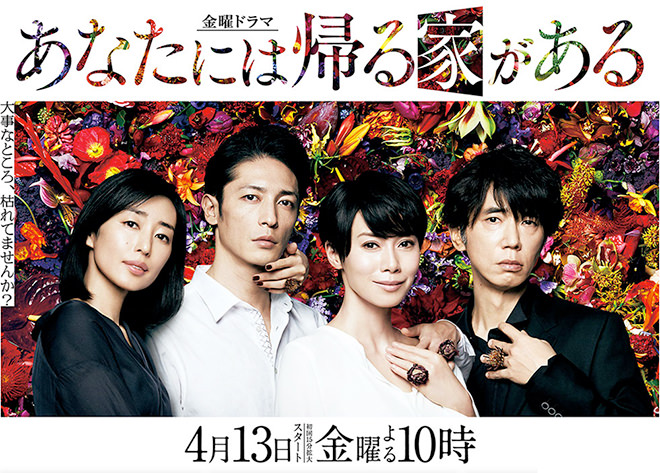 Story
Sato Mayumi is a housewife who has been married to Hideaki for 13 years. Mayumi is a little sloppy while Hideaki is concerned about the wrinkles on his folded shits and expiry dates of the food in the fridge. They complain about each other at a curry cafe owned by their common friend Miura Keisuke every day. Their daughter Rena has been accepted to a prestigious private junior high school after the fiercely competitive entrance examinations. But her school fees and miscellaneous expenses will squeeze the household budget. On the way home from Rena’s enrollment ceremony, Mayumi meets Aikawa Yuki who was her peer at the travel agency that she used to work at, and is encouraged to return to work. That night, Mayumi tells Hideaki about it. However, he behaves as if to say that it is impossible. She responds to this by impulsively deciding to go back to work for the first time since their marriage in order to maintain their lifestyle. However, Hideaki does not feel a sense of crisis and is also not supportive of her work or cooperative with household chores. This makes Mayumi unhappy with him. Meanwhile, Hideaki receives Nasuda Taro and his wife Ayako who have visited a show house of the housing sales company which he works for. Hideaki recommends rebuilding but Taro responds with a patronising attitude and the situation seems very awkward. Several days later, Hideaki visits the Nasudas for business and is once again treated with little regard by Nasuda. On his way home, he is stopped by Ayako who apologises for her husband’s rudeness. Hideaki is captivated by Ayako who is the complete opposite of his wife. Ayako herself feels that meeting Hideaki is destiny. At home, the void between Mayumi and Hideaki deepens. He feels increasingly uncomfortable, the more she tries to work hard on her own for the sake of the family and ends up retreating into a forbidden romance with Ayako. Little by little, invisible cracks begin to appear between the couples … …

Characters
Nakatani Miki as Sato Mayumi
A full-time housewife who has been married for 13 years. She lives with her husband Sato Hideaki and their daughter Rena. Her pregnancy at the age of 28 led to her marriage with Hideaki. She resigned from the travel agency that she worked for and has been a housewife since then. She is the type who is like the caring eldest daughter, and a rather “strong” wife. She is terrible at housework, and would clean a square room in a circular fashion. Although she loves her husband, a little discontent has built up after marriage of more than 10 years and once she sees his face, she would say spiteful things against her better judgement. She meets Aikawa Yuki, a former colleague from her time working at the travel agency, after Rena’s junior high school exams have ended and is encouraged by Rena to work again. She decides to return to the workplace to spite Hideaki who disparages her. However, the more Hideaki works hard for the family, the more he begins to become emotionally distant.

Tamaki Hiroshi as Sato Hideaki
Sato Mayumi’s husband. He is a salesman who works for a housing sales company. He feels that everyone can probably sense that any man would have an honest opinion which he cannot tell his wife. He is organised and detailed. He does not voice it in front of his wife but he is rather scathing. He gets nagged by Mayumi and endeavours to economise, but he is particular about what he wears and carries. He is not outstanding as a salesman and gets sarcasm from his boss every day. To make matters worse, Mayumi starts to work and the couple spend increasingly less time together. Because of these circumstances, he is carried away by impulse attracted to Nasuda Ayako who is a contrast to Mayumi.

Santamaria Yusuke as Nasuda Taro
A junior high school teacher. He has refreshingly old-fashioned family values that men should work outside and women support men, in this modern world. Although he splits the bill and only pays the consumption tax portion, he gives a haughty air. He shows off his beautiful wife Ayako’s photos to the people around him. He is not only a domineering husband but also a troublemaker who acts on instinct. He and Ayako visit the show house of the company where Sato Hideaki works, but also gets acquainted with Sato Mayumi elsewhere and the two couples begin to cross paths … …

Kimura Tae as Nasuda Ayako
A perfect woman as a housewife. She lives with her husband Taro, their son Shingo and Taro’s parents. Her life is similar to Sato Mayumi on all counts
She is obedient to her husband and would rather not resist because she is not comfortable socialising with people. She does not go out more than necessary and throws herself into household chores. She convinces herself that she is happy. But she feels that meeting Sato Hideaki is fate and gets drawn to him.

Suruga Taro as Miura Keisuke
The owner of a curry shop. He is divorced. A good man who is a good listener. Sato Mayumi was a senior who belonged to the same track team during high school days and Sato Hideaki was his classmate in university. He introduced them and they got together. So he frequently has to listen to their complaints about married life.

Fueki Yuko as Aikawa Yuki
Sato Mayumi’s colleague during the time she worked at the travel agency. She has a straightforward character. She meets Mayumi again and encourages her to return to the workforce. She becomes Mayumi’s boss. She is a single, capable woman, and seems to be cynical about marriage.

Triendl Reina as Kojima Nozomi
A colleague at the travel agency where Sato Mayumi has found a job again. Although she is younger than Mayumi, she becomes her senior. At first, she considers Mayumi a nuisance but some incident causes her to rely on Mayumi.

This blog contains information and musings on current and upcoming Japanese dramas but is not intended to be comprehensive.
View all posts by jadefrost →
This entry was posted in Spring 2018 Dramas, TBS/MBS and tagged Anata ni wa Kaeru Ie ga Aru, Kimura Tae, Nakatani Miki, Santamaria Yusuke, Tamaki Hiroshi. Bookmark the permalink.